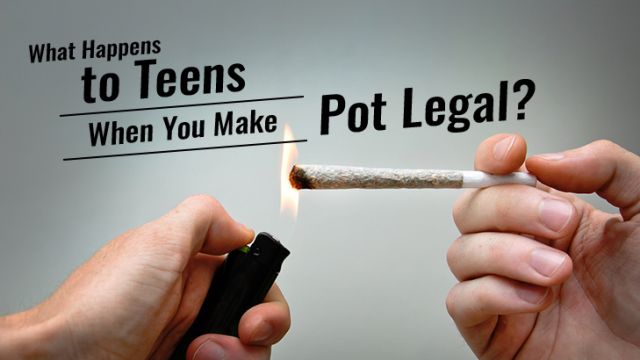 A national survey of more than 216,000 adolescents shows that the number of teens with marijuana-related problems has dropped, and the rates of use by young people are falling.

A second survey of Colorado teens also shows marijuana use has remained flat since the state legalized marijuana in 2012, data collected by the Colorado Department of Public Health and Environment shows.

Last year, 21 percent of Colorado youths reported using marijuana in the past 30 days. That rate is slightly lower than the national average and down slightly from the 25 percent who used marijuana in 2009, before legalization. The survey was based on a random sample of 17,000 middle and high school students in Colorado.

Marijuana legalization proponents have long and loudly argued that legalizing marijuana would cause teen marijuana use to soar. Concerns have been high because data has shown that marijuana use in a teen’s developing brain can cause difficulty learning, diminished memory and other cognitive issues. The data from the two studies are believed to be the first to look at the issue since many states legalized and decriminalized marijuana, and proponents’ arguments are not borne out in the data.

“The survey shows marijuana use has not increased since legalization, with four of five high school students continuing to say they don’t use marijuana, even occasionally,” the Colorado health department said in a news release.

Mason Tvert, director of communications for the Marijuana Policy Project, said the data shows elected officials and voters in states that are considering marijuana proposals should be wary of claims that it will hurt teens.

“These statistics clearly debunk the theory that making marijuana legal for adults will result in more teen use,” Tvert said in a statement. “Levels of teen use in Colorado have not increased since it ended marijuana prohibition, and they are lower than the national average.”

For their national study, researchers at Washington University School of Medicine looked at data on drug usage collected from young people ages 12 to 17 during a 12-year span. They found the number of young people who became marijuana dependent or started having trouble in school and relationships dropped by 24 percent from 2002 to 2013.

The report published in the June 2016 issue of the Journal of the American Academy of Child & Adolescent Psychiatry, data also showed that behavioral issues such as selling drugs, fighting and crimes against property also decreased during the same period. When teens were asked if they had used marijuana in the previous year, fewer teens in 2013 affirmed use than their peers reported in 2002. The overall rate dropped by 10 percent.

“We were surprised to see substantial declines in marijuana use and abuse,” he told Eurekalert. “We don’t know how legalization is affecting young marijuana users, but it could be that many kids with behavioral problems are more likely to get treatment earlier in childhood, making them less likely to turn to pot during adolescence. But whatever is happening with these behavioral issues, it seems to be outweighing any effects of marijuana decriminalization.”

Smart Approaches to Marijuana, a group opposing legalization, argues that the most recent federal surveys show teen marijuana use rates in Colorado are among the highest in the country. But this latest survey, conducted by the state of Colorado, shows teen use rates are about average. Why the discrepancy?

It may be because Colorado’s latest survey examined a significantly larger number of Colorado students (17,000), than the federal survey, which polls fewer than 400 Colorado teenagers in a given year. That much larger sample could produce a more accurate estimate than the smaller numbers in the federal drug survey.

Legalization also may not be having much of an impact on teen marijuana use — young people say that marijuana is widely available.

Nationally, roughly 80 percent of 12th graders say pot is easy to get. The kids who want to smoke weed probably already are doing so — and legalization wouldn’t do much to change that or the numbers.