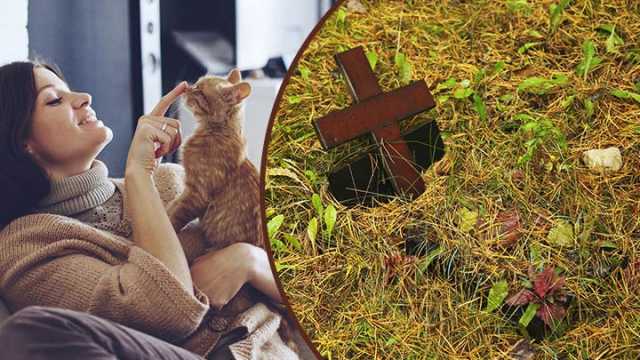 Spiritual teachers come in all shapes and sizes. Sometimes they even come with furry bodies and four legs. For as long as I remember, I’ve always believed in life after death, but that didn’t lessen the grief I was feeling after my beloved cat passed away. Although a pet can teach you so much about life through unconditional love, it wasn’t until Dusty passed away that it taught me that even after death, our pets return to console us in our sadness.

When Dusty arrived in my home, she was barely four weeks old. She was dropped off by a friend, who had recently rescued her from being euthanized. Dusty’s previous owner, of only one week, couldn’t stand to hear her incessant crying. So, she locked her in a small dark bedroom, with no food and no water as punishment, which of course, made Dusty cry all that much more. However, it didn’t break her spirit. She was a feisty little ginger cat, and I welcomed her with open arms.

Throughout the years my life changed, as one’s life does, and so too did Dusty’s. She moved with me from apartment to apartment, and then finally to my first house in the country. On the day we took ownership of our new home, Dusty sat in her carrier in the hall itching to be free. The moment we opened the carrier she tore off, galloping down the hall in a way that shouted, “I’m home!”

Each day, after work, she greeted us at the door by meowing hello and by calling my husband’s name — literally. Somehow, through imitation, she had managed to turn her meows into syllables that sounded somewhat like “hewwo Biwwy,” for “hello Billy.”

Fast forward five years later: We noticed that Dusty was becoming increasingly thinner by the day. It turned out she was suffering from kidney disease, which had worsened due to her stay at a kennel. It seems that a careless kennel worker (who despised cats) allegedly “forgot” to feed her during her four-day stay. From that point on, although she was medicated and hydrated daily, her health quickly deteriorated.

There’s a thin veil between this life and the next

The night Dusty died, her little body lay gasping for air in her bed. I had a huge connection to this little cat and I wanted more than anything for her to survive, but my gut told me it was time to let her go. So I stayed with her throughout the night. As her eyes began to pale I placed my finger under her paw. She curled it tightly, grasping my finger as she took her last breath. Soon thereafter, I woke my husband in tears. Still in her bed, we carried her lifeless body to the car. We then drove to an emergency veterinary clinic to have her cremated.

By the time we returned home, it was around 3:00 a.m. and exhaustion had set in. So, I crawled into bed where I collapsed in my grief. I was devastated. I had lost a precious family member and sleep did not come easy. Early the following morning, we woke to newly fallen snow. From the bedroom window, we could see at least four inches had accumulated. So, my husband headed out the front door to shovel the driveway. As he opened the door he stopped. “Come quick,” he shouted.

Tiny paw prints in the snow

Outside, on the porch, walking away from the front door, was a trail of tiny paw prints in the newly fallen snow. During her life, Dusty was a house cat, never venturing outdoors. However, on occasion, she sat outside beside us. If she walked too far away, we would say “Dusty, come back” and she always returned and sat back down. In the country, a small cat like Dusty could have easily been carried away by a predator.

Those little cat prints stamped into the snow, strangely, tracked away from the front door. There were no other footprints tracking towards the door from any angle. They were simply walking away from our front door as if Dusty had passed right through to take a stroll. In disbelief, we stood staring silently. There was no more pain for Dusty, no more watching the world from the window. Now, it was her turn to explore and have an adventure. If it hadn’t snowed, then we wouldn’t have seen her paw prints. I believe we were meant to see them, so that we would understand that although her life ended, her spirit did not.

Our pets stay with us when they die

Sure, all animals have an instinct for survival, but I don’t believe animals contemplate mortality like humans do. Through Dusty’s death, I learned that we really don’t need to fear death because all animals (human and non-human) simply move into another reality when they pass. Some believe that’s heaven, some believe it’s another realm.

About a month after Dusty died, I woke up to find her sitting on my husband’s pillow staring at me. She had a translucent-like quality that seemed to glow. The funny thing was, before my husband and I had moved in together, each night Dusty would curl up on the second pillow by my head to sleep. However, when my husband joined the family, he firmly insisted that pets should not share a bed with humans — he’s a bit of a germaphobe. But Dusty was a stubborn cat, so it was no surprise that I found her sitting smack dab in the middle of his pillow, with what appeared to be eyes glowing and a sly smile on her face. Her apparition disappeared quickly, but I couldn’t help but believe she was letting me know she was okay and in a good place, close to where I needed her to be.

After Dusty’s death, we chose to adopt two more cats. Occasionally, the older cat will walk over to where Dusty’s bed used to lay. As if summoned, she will purr, talk for a while and then curl up and fall asleep. It seems that there’s a thin veil between this life and the next — even for pets.