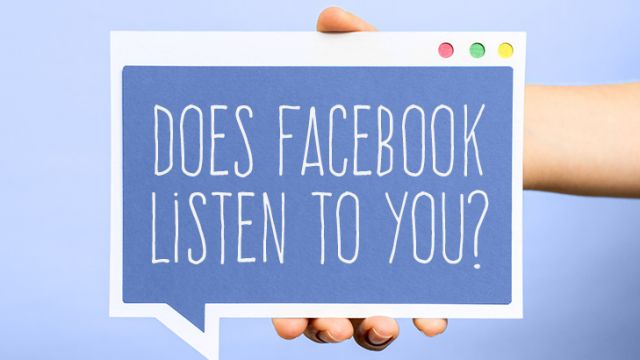 A recent report claims that Facebook may know a little too much about its users, taking over your smartphone’s own microphone to listen and change ads or what you see in your news feed based on what Facebook hears you saying. The company issued a denial, but the site certainly watches your every move online.

Recently, a reported suggested that Facebook might be listening in on user’s conversations all of the time through the phone app version of the site. Facebook denies that its app listens to what’s happening around it, according to the Independent. But it does monitor what people are listening to or watching and then suggests that the user post about it.

While the app has been around for a couple of years, a warning from Kelli Burns, a mass communications professor at the University of South Florida, put it into the spotlight. Burns suggests that the app uses the audio feature to gather information and not really for helping users. (She later denied the statement.)

Facebook definitely uses information it gathers to serve its users (and, increasingly, anyone online) with relevant advertising. To prove her theory about the microphone, Burns tested it by discussing certain topics around the phone. The site then appeared to show relevant ads matching her conversation.

“Facebook does not use microphone audio to inform advertising or News Feed stories in any way,” said a Facebook spokesperson to the Independent. “Businesses are able to serve relevant ads based on people’s interests and other demographic information, but not through audio collection.”

“Some recent articles have suggested that we must be listening to people’s conversations in order to show them relevant ads. This is not true. We show ads based on people’s interests and other profile information – not what you’re talking out loud about.”

That sounds like data brokering to me. Data brokering is not that much different than listening in on our conversations. It entails collecting information from users.

Last month, Belgian police warned citizens not to react to posts on social media. In February, Facebook launched six new ways of reacting to a post, alongside the Like button. The s0-called “Reaction” buttons were intended to respond to demand for a “Dislike” button by allowing people to share their feelings about posts without appearing to endorse what is said.

According to the Belgian police, Facebook is using button data to collect information about people and decide how best to advertise to them. So they warned users to avoid using the buttons if they wanted to preserve their privacy.

Data brokering is a multibillion-dollar business that collects, analyzes and sells your personal information, often without your explicit knowledge. When it comes to data collecting, no one does it better than Facebook. Facebook thus possesses what most established companies want: incredibly detailed user demographic and psychographic data on each of their 1.65 billion monthly users.

But when is enough — enough?

Right now, Facebook doesn’t need to listen in on your conversation. They already have all the  information on you that they can possible want — your likes, dislikes, wants, needs and spending habits. Let’s face it, despite our growing privacy concerns, without advertising the Internet would be a boring place. Companies (like Facebook) need to be profitable to survive, and for most the path to revenue is through advertising.

But you can’t help but wonder, if we blindly allow social media sites free rein to collect and manage all of our personal data, what next?