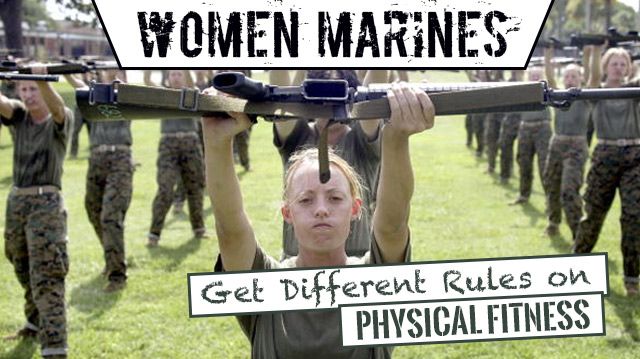 In response to a recent Marine fitness review that found “some current standards are either not relevant, not challenging or not attainable,” the U.S. military branch has changed its fitness standards for women. Formerly, women were required to perform at least three pull-ups in order to pass the Marine’s Physical Fitness Test (PFT). This minimum requirement was the same for men. Now, women have the option of performing a flexed-arm hang in lieu of pull-ups.

This change in fitness standards was partially due to Marine research that found women Marines were only able to perform an average of 1.63 pull-ups, and that 55 percent of female recruits were unable to reach the mandatory minimum. This is in stark contrast to the 1 percent of men who fail this portion of the fitness exam.

The PFT is a semi-annual test comprised of pull-ups (now with the flexed arm-hang option for women), abdominal crunches and a three-mile run. The evaluation is designed to test general fitness levels of Marines and recruits, but it is also directly tied to promotion within the Corps. While women are able to pass the test with a flexed-arm hang, in order to get a perfect score and have their performance become an asset for promotion, they would have to complete 8 pull-ups. In contrast, a perfect score for men requires 20 pull-ups.

Some praise this new change of policy, saying that it will motivate women to work on increasing their score without fear of failure due to an inability to perform pull-ups. Others are skeptical, citing pull-ups as an accurate measure of combat skills that should have no gender distinction in the field.

Removing casualties from danger, throwing a grenade 15 meters and sustainably loading and reloading 50 pounds worth of ammunition are just a few real-world combat duties that are crucial in war time. Some argue that if women are unable to perform pull-ups, how would they be able to adequately assist with these strength-bearing tasks in a war zone?

Of course, there are physiological differences between men and women. In general, males have more muscle mass than females and are therefore able to pull, lift and carry heavier weights. Still, Greg Jacob, policy director for Service Women’s Action Network, says that these physiological differences are overstated and not solely gender-based. Jacob suggests that muscle mass varies between men as well, depending on build and stature. Instead, Jacob says that goal-driven training can help equal the playing field, rather than giving women a pass on pull-ups.

“I saw women who could only do one or two pull-ups be able to bust out, over the course of four or five months, eight pull-ups,” he said. “And that was because they were training to that standard.”

Previous to this fitness policy change, the Pentagon took a firm stance that its standards would not be lowered for women. In fact, in late 2012 the Marine Corps sought to toughen them, citing “nonnegotiable physical demands” as being part of the repertoire for armed combat, regardless of gender. If women were to participate in combat, they would first have to prove themselves physically capable. Now the policy has been reversed, as most women were unable to meet the difficult pull-up standard.

This change in policy begs the question of whether our society is headed in the “separate but equal” direction when it comes to gender rights. On one hand, women would be unable to move up the ranks within the Marine Corps without these new lowered standards. This seems unfair. However, allowing women the opportunity to pass critical fitness tests with lower-caliber strength than men could lead to compromised performance in the battle field. It looks like there is no easy answer.

What do you think? Do you agree with the lowered pull-up standard for women, or do you believe men and women should have to perform the same level of fitness testing in the Marines?