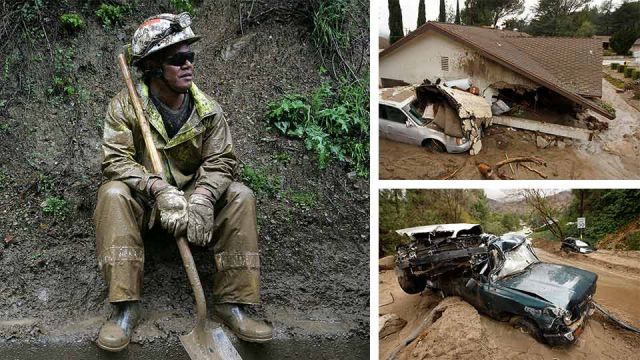 Rescue teams in Southern California are working extra hours to scan through tons of debris from the disastrous and deadly mudslides that have seriously impacted several of the state’s coastal towns.

So far, nearly 17 people are dead and eight people are missing after walls of mud raged downhill. The main areas impacted are between the Pacific ocean and the Los Padres-National Forest.

Along with the fatalities, the mudslides have wiped out almost 100 homes and have injured over 28 people. “We have crews out there,” said Amber Anderson, a spokeswoman for the Santa Barbara County Fire Department. “They’ve been working 24 hours a day.”

The mudslides are a result of last month’s wildfires, which were the largest in California state history. As a result, the dead grass and shrubs that held the soil in place got destroyed and baked a layer into the earth that is now preventing water from sinking deeply into the ground like normal.

Currently, residents are waiting on word for their loved ones, according to Santa Barbara County Sheriff Bill Brown.

UPDATE: As of 8 a.m. this morning there were 8 open missing persons cases and 17 confirmed fatalities related to the storm event. #sbsheriff

With rescue operation in full force, here are 21 of the most jaw-dropping images to give you some perspective on what some people are going through:

1. A highway in Montecito covered in mud

Unbelievable devastation… this is a drive westbound on Olive Mill Rd from Hot Springs in #Montecito. The lake at the end is the 101. #Ventura pic.twitter.com/twUc3ByrLX

3. A bear that got caught in the deadly mudslides

Amazing photo of bear that was caught in the #montecito mudslides #summerlandbeach pic.twitter.com/FFYc7AsisS

4. Fallen trees that created major problems in the area

I’ve never seen anything like what I’m seeing in #Montecito today. Devastation is unbelievable pic.twitter.com/XG5uT3e9MD

6. A highway completely covered in mud

My brother sent me this photo from #Montecito, CA. He tells me underneath all THAT is a hwy. He was forced to close his restaurant & like so many out there is devastated by the loss of life. #mudslides pic.twitter.com/wQMFXPI2sA

This is intense. Dad took these while trying to get a friend out safely. #CAstorm #SantaBarbara #Montecito pic.twitter.com/4oNea4ZFSw

9. The damage as seen by NASA

10. A highway covered in mud

Video shows the 101 Freeway turned into a river of debris and mud in the Montecito area. Powerful storms and mudslides have left at least 8 dead in Santa Barbara County. : @santabarbaracountyfire #ktla #mudslide #wx

11. Oprah showing the destruction in her yard

Oprah sifts through her mud-covered yard. Continue praying for Montecito and all the first responders! #santabarbarastrong #montecitostrong #thomasfire #CAstorm #mudslide

14. A car being carried in the mud flow

15. A vehicle stuck in the mud

This was only two days ago?! Feels like two weeks ago since we hydroplaned on a mudslide on the 101 freeway, waded waist deep into flooded roadways & came upon the worst devastation in decades of smashed homes in #Montecito #reporting #reporterlife #news #live #mudslide @cbsla

16. A beach in Santa Barbara

17. First responders at a house

Praying for everyone in Santa Barbara County and in Montecito, Ca. 15 dead and more missing. Devastating #prayformontecito #montecito #santabarbara #805 #mudslide

101 north bound in #montecito looks more like a swamp than a freeway. #castorm #mudslide

19. A woman being rescued

#Regranned from #reachoutww – The search and rescue continues a day after intense rains hit Southern California, causing deadly mudslides. The death toll is up to 15 as many more are still unaccounted for. ROWW is monitoring the rescue efforts of the hundreds of residents still trapped by debris in the Montecito Romero Canyon area. Pc:Reuters #southerncalifornia #california #venturacounty #montecito #mudslide #rain #disasterrelief #roww #reachoutworldwide

20. Mud across the landscape in Santa Barbara

The Santa Barbara County Public Health Department issued a closure order on Wednesday for all restaurants, markets, and other food businesses affected by the Boil Water Notice. Tuesday was the heaviest day of the most recent rain storm. Heavy rains saturated an already charred landscape still recovering from recent fires throughout the area. Rescue crews worked overtime to extricate stranded residents and clear roads made impassable by the mudslides. At least 15 people were declared dead and 100 homes destroyed. Authorities are working to reach 300 people still stuck in their homes. Wednesday was declared a “public safety exclusion zone” barring all but emergency crews from the affected areas. Five highways remain closed, including the 101 (a main north-south artery for the area), with parts of highways resembling river beds filled with dirt, debris, boulders, and rocks up a foot deep. Sheriff Bill Brown of Santa Barbara County said “Although we knew it was coming people are really shocked at the extent of the damage and how big the impact was to the area”. #SOSProducts #mudslide#SantaBarbara #Montecito #rainbow #emergencypreparedness #disasterpreparedness #recovery