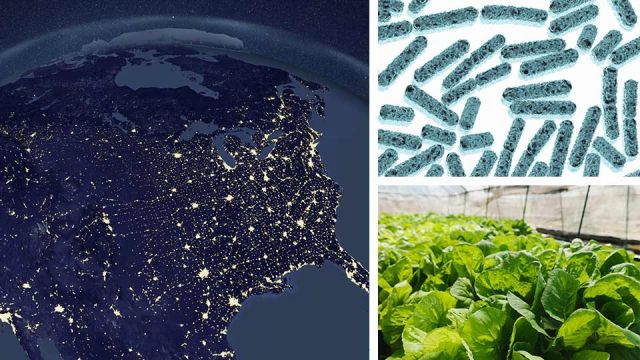 Health authorities announced Thursday they were investigating more possible cases in a suspected E. coli outbreak, which has hit at least 15 states so far.

Both the U.S. Centers for Disease Control and Prevention (CDC) and Food and Drug Administration (FDA) said they had uncovered as many as seven previously unreported cases of possible E. coli contamination, bringing the total number of suspected cases to 24 nationwide.

Nine people have already been hospitalized in connection with the possible outbreak, which was first reported by the CDC in late December. The CDC has reported one death in California.

In Canada, romaine lettuce was the source of the outbreak

A similar outbreak killed at least two people and infected more than 50 others in Canada in recent months. The Canadian outbreak has since been declared over by local authorities, though the incident may be linked to the U.S. outbreak, according to the CDC.

“The Public Health Agency of Canada has identified romaine lettuce as the source of the outbreak in Canada. In the United States, state and local public health officials are interviewing sick people to determine what they ate in the week before their illness started,” the CDC said in December. At the time, this prompted speculation the suspected U.S. outbreak could likewise have been caused by contaminated romaine lettuce.

In Canada, health officials concluded their outbreak was likely sparked by romaine lettuce that could have been contaminated with cattle feces or raw meat. “Leafy greens, such as lettuce, can become contaminated in the field by soil, contaminated water, animals or improperly composted manure,” the Public Health Agency of Canada explained.

“Contamination in lettuce is also possible at the grocery store, in the refrigerator, or from counters and cutting boards through cross-contamination with harmful bacteria from raw meat, poultry or seafood,” they added.

Since then, the CDC has said they’re yet to identify an exact source of the E. coli. While the prime suspect remains leafy greens, investigators have expressed skepticism over whether romaine lettuce could be the culprit.

Half of the outbreak’s victims in the U.S. have reported eating romaine lettuce prior to falling ill, leading the CDC to conclude “ill people in this outbreak were not more likely than healthy people to have eaten romaine lettuce.”

“Ill people also reported eating different types and brands of romaine lettuce. Currently, no common supplier, distributor or retailer of leafy greens has been identified as a possible source of the outbreak,” the CDC said.

For now, the CDC hasn’t recommended any particular foods for American consumers to avoid, noting any leafy greens linked to the initial cases would probably have cleared supermarket shelves by now. “Because of the short shelf life of leafy greens, [the] CDC is not recommending that U.S. residents avoid any particular food at this time,” they noted.

The good news is that this means future cases are unlikely, though the CDC warned potential reporting delays could mean more Americans have already been sickened by the bacteria. “Although the most recent illness started on December 12, there is a delay between when someone gets sick and when the illness is reported to [the] CDC,” they said. The CDC continued, “For [E. coli] infections, this period can be two to three weeks. Holidays can increase this delay.”

“Because of these reporting delays, more time is needed before CDC can say the outbreak in the United States is over,” they concluded.

How to avoid E. coli

E. coli is one of the most common food-borne bacteria that can pose a serious health risk to consumers. While some people exposed to E. coli never get sick, those who develop symptoms tend to do so within around ten days of exposure. Common symptoms include vomiting, nausea, fever, diarrhea, stomach cramps and headaches.

The bad news is E. coli has no treatment. Usually, cases resolve within a few days, with most of those infected making a full recovery after a few days in bed. Dehydration can be one of the biggest issues in mild cases. However, serious cases can require hospitalization, and potentially deadly complications aren’t unheard of. Anyone with a weak immune system, small children, the elderly and pregnant women are most at risk of developing more severe symptoms or complications, such as kidney failure and seizures.

To avoid E. coli, consumers should always wash food thoroughly before eating, while avoiding raw products like juices and unpasteurized milk. However, even then E. coli can still pose a threat, especially for fans of leafy greens. “This bacteria can actually get inside the lettuce leaf,” Ian Williams, chief of the CDC’s Outbreak Response and Prevention Branch, told CNN. “Washing it doesn’t make it safe,” he said.