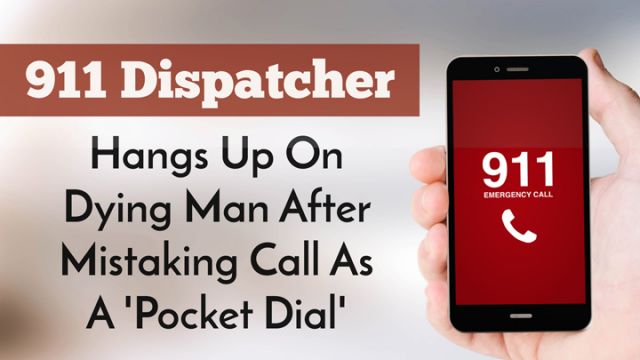 Most of us have either sent one or received one — the infamous “pocket dial” or “butt dial.” But for 911 dispatchers who are on the receiving end, pocket dials are not only nuisances, but also mistakes that could cost a life.

As smart as smartphones are, unless you keep them locked when not in use, you might risk dialing 911 by accident. While it may not seem like a big deal, it further adds confusion to the already stressful circumstances in which 911 operators have to work. Not to mention that accessing emergency lines unnecessarily can hinder our chances of getting help when we need it most, as was the case for a 56-year-old Virginia man.

Recently, Robert Paulus of Fredericksburg, Va., died of heart disease while alone in his apartment according to the Associated Press. His son, Michael, told ABC affiliate WJLA that his father was in poor health and they didn’t have much time left with him. Nevertheless, they were devastated by his passing, and what was even more distressing was the fact that Paulus’ last call was to 911, three days before he was found dead in his apartment.

“There was one final cry for help and nobody responded,” Michael said in an interview with WJLA.

Paulus’ family asked WJLA if they could help find out why nobody responded to his call. The news station was able to confirm through Paulus’ service provider, AT&T, when the 911 call was made and that it was indeed his last.

A spokesperson for the Fredericksburg Police Department told WJLA that the call’s record had been found through the city’s 911 dispatch center. It was 18 seconds long. Apparently, the dispatcher tried three times to make contact with Paulus. But after hearing nothing except an unidentifiable sound, the call was labelled a pocket call, where no callback is required.

With the advent of smartphones, police departments around the world have been begging citizens to lock their devices when not in use. Accidental 911 calls make up a large percentage of emergency calls throughout North America. Continual pocket dialing makes it easier for dispatchers to disregard real life-threatening emergencies, as was the case with Robert Paulus.

Share the message, and lock your phone when not in use.