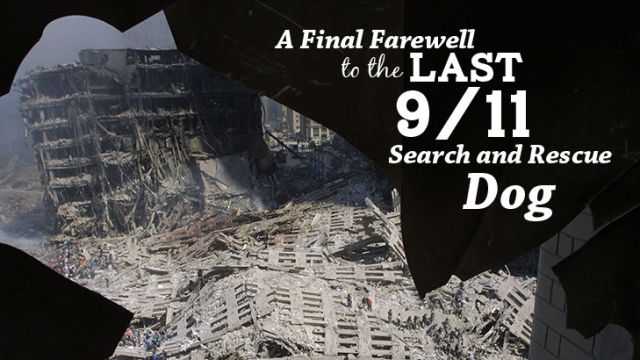 Bretagne and her owner/handler Denise Corliss spent 10 days at the site as part of Texas Task Force One, their first deployment as a team. Just last year, she and Corliss returned to New York City to visit the 9/11 museum. Bretagne was 16 years old at the time of her death, a remarkable age for a golden retriever. New York City was the site of her recent 16th birthday celebration. She flew to New York City and was transported to the festivities via limousine.

The Federal Emergency Management Agency certifies rescue dogs and their handlers, and retests them every three years. Dogs must be at least 18 months old before taking the test. Disaster search canines must prove proficient in:

Dogs must show persistence, the willingness to keep working in uncomfortable and distracting situations. Only top teams pass this demanding test.

All of the responders — some of whom gave their lives — were heroes at Ground Zero. Some of those heroes had four legs and a tail. Approximately 900 search-and-rescue canine teams worked at either Ground Zero or the Pentagon. In New York, each dog worked for an average of 10 days in shifts lasting from 12 to 16 hours. They searched for survivors, but there were few of those. Soon the search and rescue mission became one of search and recovery, as the dogs sniffed for human remains. Although they didn’t find survivors, these dogs gave great comfort to the people at the devastating scene, both rescue workers and the families of victims. Bretagne was especially approachable and friendly.

The dust was intense, and after rainfall it hardened into a concrete-like substance. Veterinarians onsite looked after the dogs’ welfare, especially checking their pads to ensure they weren’t irritated by exposure to the dust and debris.

In a later study funded by the American Kennel Club Canine Health Foundation, it was discovered that these hero dogs did not appear adversely affected by their time at Ground Zero, when matched against control canines. Most of the hero dogs lived to at least age 12, which is average for the larger breeds used for search and rescue. At the end of the study, two of the dogs were still alive. One was Bretagne, while the other was an English springer spaniel named Morgan. However, the spaniel didn’t actually work at Ground Zero, but on Staten Island searching for remains in the Twin Towers rubble taken to the Fresh Kills landfill.

Corliss first met Bretagne when the puppy was just 8 weeks old. She was looking for a search-and-rescue prospect, and looked at quite a few puppies before deciding on Bretagne. At one year of age, she began her search and rescue training. Corliss, an electrical engineer, later said she hadn’t appreciated the magnitude of the training, which took 20 to 30 hours weekly, virtually all of her free time outside of work.

Bretagne was just two years old when she worked at Ground Zero. That was far from her only stint as a FEMA search and rescue canine. She and Corliss worked as a team at other disaster sites, and were responders in New Orleans for Hurricane Katrina. They also participated in rescue efforts for Hurricanes Ivan and Rita, and were on hand for the Olympic winter games.

Although Bretagne retired from search and rescue work in 2009, she continued to serve her community. She became a “reading” dog at her local elementary school, where first graders read to her to improve their skills. Her loving presence also helped children with autism.

Corliss knew it was Bretagne’s time, and made arrangements for her euthanasia. As the old dog was lifted from her vehicle on her final walk into the vet’s office, more than a dozen firefighters were on hand to give her a final salute. After she was put to sleep, her body was wrapped in an American flag.