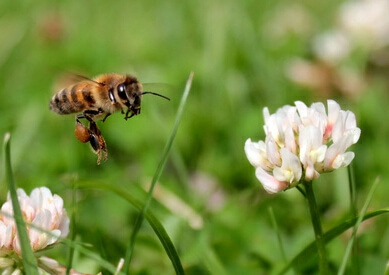 It seems as though our health is not the only thing that is suffering as a result of air pollution. Honeybees don’t see very well and depend a great deal on their sense of smell to lead them to scented flowers bursting with pollen. According to researchers out of the Virginia, bees are finding it increasingly more difficult to locate flowers due to high levels of air pollution that interferes with the flower’s scent.

Before the 1800’s, it was thought that a flower’s scent could travel up to 4,000 feet. Today, it is thought to travel only up to 1,000 feet in highly polluted areas such as Los Angeles or Houston. With a reduction of up to 90% in the flowers aroma, bees become easily confused, flying around aimlessly in search of food for their hive.

Scientists feel that these findings possibly help to unlock some of the mystery around the pollination crisis that is being reported with certain crops. Over 80% of the world’s food crops are dependent on honeybees for pollination. Both honeybees and bumblebees are disappearing here and in other countries. Researchers believe that pollutants from automobiles and power plants play a big part in the death of these pollinators.

Although not thought to be primarily associated with colony collapse, where up to 25% of beehives have been deserted, this pollination crisis explains a reduction in bee numbers. Air pollution gets in the way of mate attraction and defense against predators.

Making matters worse is the fact that air pollution is particularly bad in the hot summer months when pollination activity is at it highest. Bees are not alone in their struggle, other pollinators have trouble locating sufficient food and the overall population of pollinators declines for lack of food. Flowering plants, including fruits and vegetables have a difficult time proliferating under these stressed conditions.

The earth’s natural ozone is about 10 to 30 miles above the Earth’s surface, and it provides protection for us from the sun’s ultraviolet rays. Harmful ozone is found near the ground level where pollutants from cars, power plants and chemical plants react with sunlight.

Exposure to ozone can irritate the respiratory system and reduce lung function. Researchers note that the health impacts of exposure to ozone vary among different people and linger a long time after exposure has ended.

With ozone level readings continuing to skyrocket, environmentalists are looking at the impact not only on human health but also on the overall health of the planet and what this means for our natural resources.