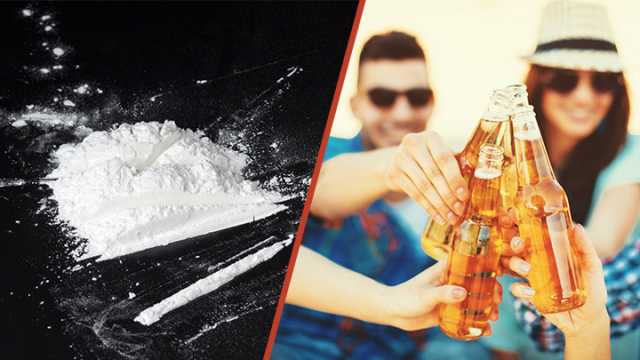 I had my first alcoholic beverage when I was about four years old and it was given to me by a priest. My mother had provided my uncle — a member of clergy — with a rum and coke, but she had neglected to mention the shot of Bacardi she had added to his glass. Unwittingly, he must have passed the drink onto me and I proceeded to get tipsy. I’m fortunate that I didn’t have to worry about driving home that night (I was reportedly in quite a state) because alcohol and four-year-olds don’t mix.

I come from a very temperate family. My parents set a good example. An occasional drink could complement a meal or add to a festive event, but they never overdid it. Sometime in high school, however, I adopted the example my peers were setting — namely, that overdoing it was entirely the point.

We had some fun times, no doubt, and narrow escapes too. But I’m especially grateful that one night — after singlehandedly polishing off a six-pack — I had the epiphany that “less is more.” Thereafter, I simply capped my drinks at one or two (sticking to soda and seltzer after I’d reached my self-imposed limit).

Binge drinking was pretty normal where I grew up. It seemed pretty cool and exciting at the time, but in retrospect, I can also see that it’s a significant problem that has taken quite a collective toll. I often hear about friends and acquaintances killed in road accidents, lives cut short by alcohol-related health problems, and careers and marriages derailed by alcoholism.

It’s a sobering realization, but excessive alcohol consumption can be quite dangerous. As kids, we heard messages about the grave perils of marijuana, cocaine and heroin. But in terms of damaged lives, the people I grew up with seem to have suffered more from alcohol than any other drug. With that in mind, here are five reasons alcohol is more dangerous than cocaine:

According to the CDC, almost a third (31.9 percent) of all traffic fatalities are due to drunk driving. In 2015, for example, 10,256 people were killed in alcohol-related accidents. That works out to one death every 51 minutes. Similarly, one person is seriously injured every two minutes because a driver is over the legal limit. In contrast, narcotics (including cocaine and marijuana) accounted for 13.7 percent of fatal car accidents.

2. Alcohol is the biggest danger to society

According to a study published in the prestigious medical journal, The Lancet, alcohol does more harm to society than any other drug (including cocaine and heroin). Here are some rather sobering statistics from the Center of Media Literacy:

3. Alcohol is linked to violence

Ironically, prisons are filled with non-violent drug offenders, but alcohol is by far the greatest risk factor when it comes violent behavior. For example, 67 percent of all criminal spousal abuse cases involve alcohol. In addition, 86 percent of all homicides involved individuals who were drinking at the time.

Furthermore, according to the National Institute on Alcohol Abuse and Alcoholism, drinking is the biggest risk factor when it comes to rape. For example, more than 50 percent of all sexual assaults involve excessive alcohol consumption. When it comes to violence, no other drug even comes close.

4. Alcohol is linked to cancer

Alcohol has long been linked to fatty liver disease and cirrhosis. However, more recent studies have established an even clearer link between drinking and cancer. According to findings published in the journal Addiction, “There is strong evidence that alcohol causes cancer at seven sites in the body and probably others. Current estimates suggest that alcohol-attributable cancers at these sites make up 5.8 percent of all cancer deaths worldwide.”

If these scientists are right, then half a million people succumb every year worldwide to cancers caused by alcohol. To put that in perspective, cocaine has only been linked a very rare form of cancer known as non-Hodgkin’s lymphoma.

5. Alcohol is toxic to every organ in the body

Alcohol has been linked to a wide range of health problems including heart disease, obesity, depression, ulcers, stroke, birth defects, numerous cancers and high blood pressure. Medical experts seem to agree, alcoholism kills people slowly, whereas as drugs like crack cocaine tend to kill people quickly. However, the stats speak for themselves — an estimated 100,000 people die every year from alcohol-related diseases, which dwarfs the 47,055 people who fatally overdosed on heroin, cocaine or prescription drugs in 2014.

What about alcohol versus cannabis?

According to anecdotal reports, millennials are forgoing alcohol in favor of cannabis. This is probably a healthy trend in so far as marijuana is less toxic to the body, not physically addictive, and not as injurious to society.

However, moderation appears to be key and that happens to be the case whether you are having a beer or a bud. I’ve read quite a lot about centenarians — those privileged individuals who live past 100. Many of them appear to enjoy a daily nip of whiskey or even a cigar. The binge drinkers and two-pack a day crowd tend to get weeded out of this select group.

There’s definitely something to be said for adopting a “less is more” attitude. Particularly, if you plan on being around for the long term.