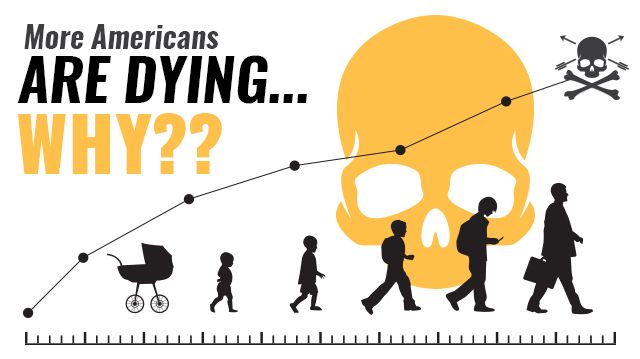 The U.S. death rate has moved up a notch for the first time in a decade. The rise was attributed to changes in various categories, including deaths due to aging-related illnesses such as Alzheimer’s. But what’s surprising is the increase in deaths from drug overdoses, liver disease due to alcoholism, and depression-linked suicide.

Death in America is on the rise, reports the Centers for Disease Control, after declining for years thanks to improvements in health, disease management and medical technology. The increase was driven in part by more people dying from gun play, drug overdoses and suicide. In addition,  heart disease, which was in decline for a long time, has edged higher, along with Alzheimer’s deaths.

In the recent report, the CDC looked at the changes in death rates per 100,000 people between 2014 and 2015. The health research agency adjusted the findings to reflect an aging boomer population and found a sharp increase in deaths among white, less-educated Americans.

Higher death rates were attributed in part to drug-related poisonings and chronic liver disease, which is a sign of  alcohol abuse. Interestingly, death rates among blacks and Hispanics over a similar time period — dating back to 1999 — fell overall.

“There’s no smoking gun here,” Farida Ahmad, mortality surveillance lead at the National Center for Health Statistics at the CDC, told The Washington Post. “It’s something that we’re going to be looking into, and watching to see if it holds for 2016. It could be that it’s just a blip as it was 10 years ago.”

What does this mean for you?

Is it just a “blip” in the data, or are higher rates of death a sign of more serious issues plaguing American culture?  Based on data from the CDC, Save.org calculates that suicide is now the 10th-leading cause of death in the United States for all ages. Depression affects between 20 percent and 25 percent of Americans aged 18 years and older in a given year. Consequently, there is one death by suicide in the United States every 12.3 minutes.

Recovering from depression requires some action on your part, but taking action when you’re depressed is hard. The key to fighting depression is to start with a few small goals and slowly build from there. Although you may not have much energy, draw on whatever resources you have. Take a short walk around the block or pick up the phone to call a friend or loved one.

If possible, talk to someone face-to-face. The simple act of talking about how you are feeling can play a big role in lifting the fog of depression and keeping it at bay. Unfortunately, communicating via text, social media or by phone just doesn’t have the same impact, according to HelpGuide.org.

“We are not accustomed to seeing death rates increase on a national scale,” said Andrew Fenelon, researcher at the CDC. “We’ve seen increases in mortality for some groups,” he told The New York Times, “but it is quite rare to see it for the whole population.”

How to live longer

Chronic diseases such as cancer and heart disease cause the most deaths in America. There’s no magic pill to help you ward off such diseases, but there are certainly things you can do to improve your lifespan.

Taking stock of your life and curbing some basic bad behaviors can save you from an early grave — stop smoking, reduce alcohol use, exercise more and eat more whole fruits and veggies. With effort, you just may be able to improve your life and change the stats.