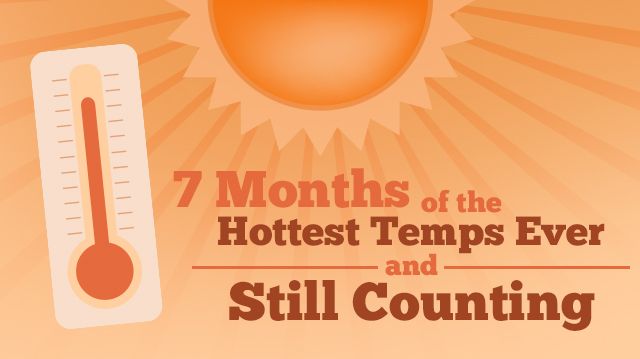 Going by the NASA data, April was the seventh month in a row where global temperatures set new record highs and it was the third consecutive month where those records were broken by the largest margin ever. If the National Oceanic and Atmospheric Administration (NOAA) data confirms what NASA has found, it will be the 12th consecutive month of year-on-year heat records by their reckoning. We recently reported on March being the 11th consecutive hot month, February being the warmest every on record.

It was worse in some corners of the world: Parts of Alaska, Russia, Greenland, and northern Africa were a full 4 degrees Celsius above their April averages. A good portion of Asia, Eastern Europe, Australia, Brazil, the Northwestern United States and Western Canada had temperature departures of 2 degrees Celsius or more.

Science talks in Celsius, but that can fool those of us used to working in Fahrenheit. A change of a few degrees C is a big deal: Every degree in Celsius is about 1.8 degrees extra in Fahrenheit. If the temperature is expected to be 32 degrees F in Alaska, then a 4-point change higher in Celsius converts to nearly 40 F. Quite a bit higher than freezing!

Though a variation of 1.11 degrees above the 1951-1980 average may seem like small numbers, global temperatures had never gone 1 degree Celsius above that average until October 2015. Since then, every month has had a departure of 1 degree Celsius or more, a significant warming trend.

The last colder-than-average month in NASA’s database was July 1985. Climate scientist Gavin Schmidt, director of NASA’s Goddard Institute for Space Studies, tweeted over the weekend that there was a greater than 99 percent chance that 2016 will be the hottest year ever recorded — a frightening mark indeed.

Fires, bleached reefs, hurricanes, and a bit of hope

Worse, the World Bank just released a report arguing that the “global community is badly prepared for a rapid increase in climate change-related natural disasters.” The World Bank estimated that such disasters will put 1.3 billion people at risk by 2050 and it urged better planning of cities. One in seven people alive today could be flooded from their homes.

But it’s not all doom and gloom. Today, world leaders began a 10-day meeting in Germany to follow up on the Paris agreement and work out concrete ways to meet global warming targets.

Some analysts have labeled the Paris targets ambitious because the burning of fossil fuels would have to be stopped within a few decades in order to meet them. While the auto industry will resist, living off renewable energy and largely without fossil fuels is entirely possible. Germany recently billed its power users negative rates — briefly paying them to take electricity — because wind farms there provided too much energy.

News like this, rather than causing despair, should act as a reminder of what organized society is capable of: If we can cause this damage, we can fix it. We can look at our own choices, and continue to pressure global leaders and the economic big guns to make responsible decisions.