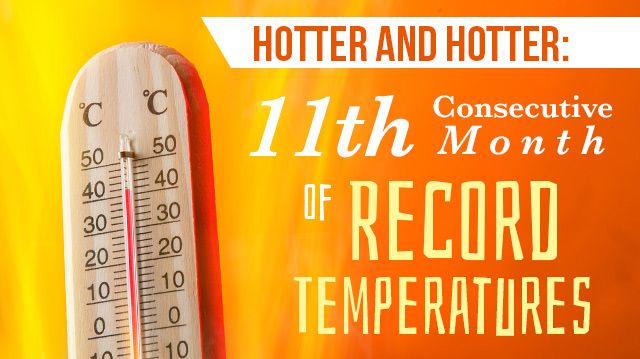 Climate scientists emphasize that the month-to-month change isn’t as important as overall trends — hence comparing March this year to March last year and the year before that is better than comparing adjacent months. Year to year, 2014 was a record hot year until 2015, which smashed through the previous year’s numbers. We’ll know soon if April numbers mean that it happened again this year.

According to NOAA, the combined average temperature over global land and ocean surfaces last month was the highest for March since they began keeping records in 1880.  March was 1.22°C (2.20°F) above the 20th century average of 12.7°C (54.9°F), making it also the highest monthly temperature departure among all 1,635 months on record.

On top of that, the 11 consecutive record-setting months is the longest such streak in NOAA’s 137 years of record-keeping.

“We are in a race against time,” U.N. secretary-General Ban Ki-moon told the leaders of 175 countries that signed the accord last week, on Earth Day.

“The era of consumption without consequences is over,” he declared. The agreement to bring down pollution levels won’t take effect, however, until at least 55 countries representing the majority of the world’s emitters by volume ratify it.

In the meantime, NOAA statistics show that we are already half-way toward the 2-degree temperature rise limit, that is, halfway toward a level of warming that considered dangerous.

“If we don’t meet these agreements, if we don’t fulfill our commitment, in the next 20 to 30 years the [global] temperature will rise by 5 or 6 degrees and we will be witness to the destruction of the planet and of life,” Bolivian President Evo Morales said at the ceremony. An indigenous Bolivian himself, Morales and his government recognize indigenous rights and the rights of the planet itself.

Morales repeated his proposal for a climate justice tribunal that judges and punishes those countries responsible for the climate crisis, as well as companies that cause damage to the environment.

While the current temperature spike is partly due to El Niño spreading warm water across the Pacific Ocean last year, other El Niño years haven’t hit such records.

Many of the consequences of the rising temperatures aren’t reversible. Rising sea levels could have severe impacts on coastal communities. Some towns already have been forced to consider relocating. The warming will cause a wave of “climate refugees,” the Obama administration said Friday, while temperature increases also will affect fish stocks.

The warming seas are turning coral reef kingdoms into bleached rubble at a frightening pace. Scientists confirmed this week that much of the Great Barrier Reef is experiencing what appears to be the worst coral bleaching on record. Tising temperatures have put severe stress on many reefs. Coral then expels algae they need to survive and turn white. There has already been extensive coral death around Kiribati, in the central Pacific.

Bleaching events are an indicator that the seas are warming at a rate that is too quick for ecosystems to adapt. That is another sign, along with global average temperatures, that the world is crossing over into “dangerous” climate change — just what the Paris agreement is meant to prevent.

Meanwhile, workers are being exposed to excessive heat, risking their health and income, a UN report revealed Thursday.

The UN calculated that $2 trillion in productivity could be affected by 2030 as more than 1 billion workers in the worst-hit countries conduct their work under increasingly severe heat conditions.

According to the report, titled “Climate Change and Labour: Impacts of Heat in the Workplace”, working in temperatures over 35 degrees Celsius (95 degrees Fahrenheit) is considered hazardous.

The evidence continues to mount that climate change is serious and urgent. While the problem may seem too big for individuals, the choices we each make matters. Let’s take every opportunity to help move our planet in a healthier and more hopeful direction.