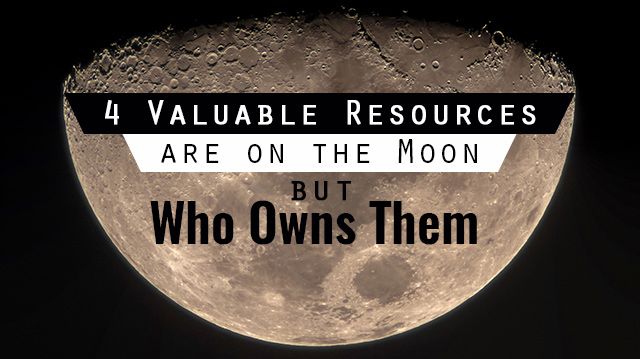 The last time a human society discovered large tracts of land that had previously been inaccessible to them, the result was a chaotic flag-planting race between England, Spain, France and anybody else with boats and a thirst for spices. Some significant problems developed out of how this situation was handled, not the least of which was that there were already people on these lands, but there was also mass chaos and war as countries raced to “claim” lands and resources.

Fast-forward half a century and the same situation might be beginning to play itself out again, but this time with a bit of a science-fiction flare to it. There are valuable resources on the moon, and whoever gets to them first can have them.

The moon is, according to recent data, not made of cheese, but there are lots of other things there that we may find useful.

Water vapor was detected on the moon by Impact Probe Chandrayaan-1 on November 18, 2008. As Earth continues to see reservoirs dry up, and access to fresh water hits a crisis point, NASA is preparing to send the “Lunar Flashlight” to the moon in 2017 to get a better idea of just how much water is actually there.

It is believed that Helium-3, which is found in large quantities on the moon, would be able to provide nuclear energy in a far safer way than what is done currently. Helium-3 is not radioactive and therefore would not be as dangerous, or produce the same kind of radioactive waste that modern nuclear energy does.

Regolith is a building material that can be used to create a wide range of structures, roads and infrastructure that could make transportation on the moon more efficient. Regolith can also be broken down to obtain ultra-pure iron and aluminum.

At the moment the costs associated with traveling to the moon and transporting back any of these materials is too costly to be profitable, but that doesn’t necessarily mean it will always be so. Private companies, and their vast economic resources, are now trying to get into the space exploration game, which could considerably change the economics of space travel and space mining.

In 2007, Google sponsored the Google Lunar XPRIZE, a competition that offered tens of millions of dollars to the first privately funded group that could land a robot on the moon, film HD video and bring it back to Earth. Two companies have received launch contracts to send their space vehicles to the moon in 2017. If successful, it would be the first time a privately funded vehicle lands on the moon.

Who owns the moon?

The idea that the moon — or asteroids, or anything at all in space — has valuable resources contained within it, leads to the question of who, if anyone, has the right to extract them. The United Nations was quite proactive on this one, having developed the Outer Space Treaty in 1967.

Over 100 countries have signed the Outer Space Treaty, including all space-traveling countries. The treaty states that the moon, and in fact all of space, belongs to everyone, and that all humans have equal rights to space. Space, the moon, Saturn, Pluto and all the asteroids can’t be owned by anyone, according to the United Nations. Furthermore, space is only to be used for peaceful purposes, and the storing of weapons of mass destruction are not allowed in orbit or on any celestial body, effectively ending Dr. X’s diabolical plan of building a Death Star.

The treaty also mentions that privately funded companies are permitted to travel and explore space, under the supervision of their government, so long as their explorations do not interfere with other exploration projects.

What the treaty doesn’t cover, however, is the extraction of resources in bulk, if that is an okay thing to do, and if so, who is able to do it. If all people have equal ownership of space, then how can one group of people take large chunks of it for economic gain?

The United Nations attempted to expand on this treaty the following decade with The Moon Treaty.

Two years after Luke Skywalker first began his Jedi training, the United Nations attempted to lay down some ground rules for space-mining and resource extraction in order to prevent space from becoming a source of international conflict.

There was and still is a very relevant piece of existing international law that was to serve as the model for this: the Law of the Sea Treaty. There are resource-rich areas on Earth that are not “owned” by any country; they’re just all underwater. According to the Law of the Sea Treaty, any area outside the ownership of a nation is governed over by the International Seabed Authority (ISA). Should a party wish to extract materials from an area not within the recognized boundaries of a nation, they would have to apply for a permit from the ISA.

ISA is recognized by 157 countries. However, the US currently objects to this process.

The Moon Treaty attempted to set up the same system for space, the moon and any celestial bodies. Under the treaty, all resource extraction would have to be done under an international regime, and the extracted resources would have to benefit all of humankind, not just the country or company that did the extracting. Furthermore the treaty bans any claims of ownership over anything in space, be it a planet, asteroid, etc., and bans the altering of celestial environments.

It seems like the United Nations has this all figured out and that space, the moon and the whole universe is something that cannot be owned by anyone. Unfortunately, the Moon Treaty was not as popular as the Outer Space Treaty. Only 16 countries have chosen to take part, and none of those countries have ever been to space.

Russia, the United States and China all passed when it came time to sign a treaty that would effectively end any of their claims to be able to extract materials from space for their sole possession.

The end result here is that when it comes to extracting materials from space, there are no rules currently in place. While this may not play a big factor in international politics for several years or decades, as water and other resources dwindle on Earth, the moon wars won’t be far behind.