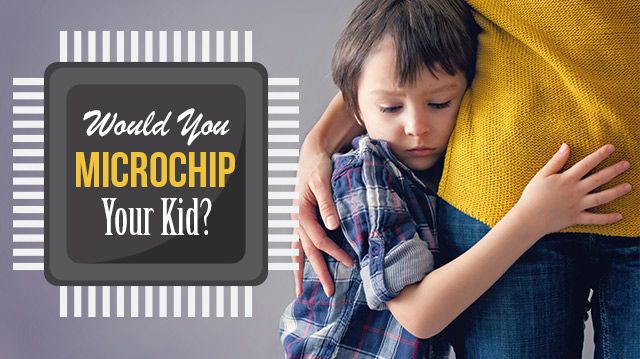 There is no denying that microchipping a child gives parents a sense of security. For some, having a child microchipped will seem “big brother-ish.” Yet for other parents, microchipping can seem a reasonable solution for a child who wanders.  But you can’t help but feel that something sinister lurks beneath the surface.

For parents teetering on the edge of a decision on microchipping, pro-chip marketing will play on their fears — pushing them over the edge to buy. Before you decide if microchipping is right for your child, think about what it would do to your child’s personal privacy, independence and sense of freedom.

Microchipping children will happen “sooner than later” say some and apparently Americans will accept the process just as they did barcodes on the stuff we buy. Steffany Rodriguez-Neely, a mother and advocate for microchipping, spoke to an NBC affiliate about how she briefly lost sight of her special-needs daughter when she disappeared behind a rack of clothes in a department store.

“If it’ll save my kid, there’s no stuff that’s too extreme,” says Rodriguez-Neely. “Microchipping would be an extra layer of protection, if something bad does happen.”

Research into embedding microchips into flesh actually began in 1998, when Kevin Warwick, a professor of cybernetics at Reading University outside of London, implanted a chip into his arm. He wanted to see if his computer could wirelessly track his movement within the university’s building. But the technology really took off when Applied Digital Solutions, Inc. in Palm Beach, Fla., experimented by implanting its VeriChip into ordinary people.

Similar to barcode technology, the microchip, about the size of a grain of rice, is encoded with information and implanted under the skin. When scanned by a nearby handheld reader, the embedded chip will provide personal information, such as an ID number that links to a computer database file containing detailed information.

If that technology sound like the chips currently implanted into your pets, it is. But there is a difference, and this is where chipping a child turns scary.

What you need to know about microchipping

What’s good for your pet is good for your child right? That’s NBC reporter Melanie Michael’s message. “Chances are if you have a four-legged family member at home, it’s already microchipped,” says Michael. “And if the technology exists to save Fido in an emergency, what about microchipping your child…”

There are similarities between the chip implanted in your pet and the one intended for humans, but there are big differences, too. They are both about the size of a grain of rice and both are injected under the skin. But pet microchips are not tracking devices and do not work with the global positioning systems (GPS) like your smartphone does. Contrary to what Michael proposes, if Fido wanders away, you could not track his whereabouts.

The microchip most likely used in a child would include a GPS device. Radio-frequency identification implants are only the tip of the iceberg, says Keith Bolton, chief technology officer for Applied Digital Solutions. The company has combined its Verichip with another device called Digital Angel, which allows parents to monitor the health and location of children through satellites.

Still on the fence?

Passive, pet-style chip implants could be introduced an ID system for children and then move on to replace fingerprints or eye pattern identification systems. I hate to be the bearer of bad news for anyone who thinks microchipping is a godsend for lost children, however. In fact, microchipping will be less about finding a lost child and more likely a solution for monitoring adult behavior.

If you’re still on the fence regarding implanting your children, think about this: What’s to stop anyone from trying to remove an implant — their own, or someone else’s. Even worse, using a chip implant to locate an abducted child could actually have an opposite effect, says Alex Soojung-Kim Pang, author of Distraction Addiction and a visiting scholar at Stanford’s University’s Peace Innovation Lab. While a microchip might make it easier to find an abducted child, the most dangerous time for a victim occurs during the rescue attempt when an abductor thinks the police are closing in, he told Fox News.

Microchipping children may offer certain advantages but there are downsides, such as the wrong people accessing personal information and tracking your child via the chip.

Would chipping your child act as a deterrent for some abductors? Maybe. Would a microchip help find your child in a lost department store? Definitely.

Consider this, however: Most embedded chips, such as the ADS VeriChip, are passive chips that provide information only when scanned by a nearby reader. Proposed active chips will need to beam out information all the time. This sort of technology could easily be used to abuse personal privacy and liberty. If your child is trackable, do you really want other people to be able to track them as well?