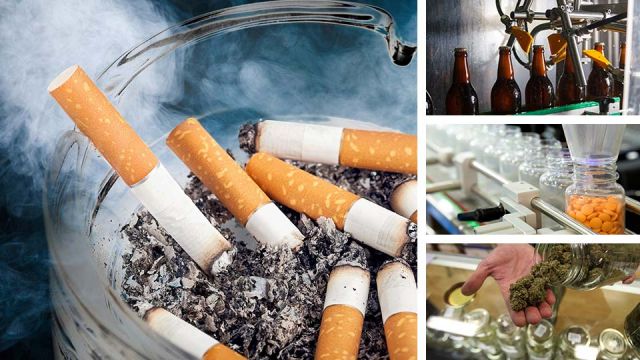 Did you know each year more people die from smoking than from murder, aids, suicide, drugs, car crashes and alcohol combined? No? Well, it’s facts like this that will soon start appearing on television ads paid by “Big Tobacco.” It seems that after decades of false advertising and debate, tobacco companies are finally forced to come clean about the deadly effects of smoking.

After the Justice Department started a racketeering lawsuit in 1999, against tobacco companies, Big Tobacco is finally being forced to run ads on TV like this:

And it only took 11 years of appeals and delays to get there. Now tobacco companies Altria, R.J. Reynolds Tobacco, Lorillard and Philip Morris USA will run a year-long advertising campaign that admits they tried to make cigarettes more addictive and that smoking kills.

“Employing the highest paid lawyers in America, the tobacco companies used every tool at their disposal to delay and complicate this litigation to avoid their day of reckoning,” The American Cancer Society’s Cliff Douglas told NBC News.

But don’t expect flash, you won’t see that in the ads. What you’ll see is simple text and robotic reading. But they will be required to appear on all major newspapers and networks during primetime. “It’s a pretty significant moment,” Douglas said. After years of deceiving consumers, “this is the first time they have had to ‘fess up and tell the whole truth.”

But it didn’t come without a fight. True to form, Big Tobacco won some significant gains. They won’t have to admit to the deliberate lies and manipulation tactics they’ve used in their advertising and promotional campaigns. Nor will they have to include alarming images of what smoking can do to a person.

And, after 11 years, they’ve managed to hold off running the ads until the media landscape has changed significantly. Today, more and more Americans get their news online. Fewer actually visit major networks or read newspapers where the ads will air. Nevertheless, ads will run at least five times a week for a year beginning this weekend, reports NBC News.

More than 50 newspapers will carry weekly full-page ads, including The New York Times and USA Today. The court ruled that Big Tobacco must also include five ads a week on the three major networks — NBC, ABC and CBS.

What’s next for Big Tobacco?

Will Big Tobacco soon become Big Marijuana? It’s been speculated for years that the tobacco industries are looking to get into the marijuana industry. By 2026, a legal cannabis industry could be worth as much as $50 billion a year, suggests Market Watch, creating a significant risk for the alcohol industry. And, since smoking rates are down significantly — 50 percent in 50 years — are we headed for abolishing cigarettes altogether?

Although executives in the tobacco industry deny any interest in marijuana, manufacturers of cigarettes and other products see enormous potential in cannabis. Many hope cannabis will be the answer to saving their own shrinking businesses, according to Patrick Basham, director of the non-partisan public policy research organization, as reported by Marijuana Business Daily.

Tobacco, with its negative public image and shrinking consumer base, no longer appeals to affluent and educated people — unlike marijuana. Yes, marijuana is still on the Drug Enforcement Administration’s list of schedule I drugs. But with increased deregulation on a state level and a potential shift away from a schedule I classification, the marijuana industry could be worth billions by the next decade, suggests Basham.

But it all comes back to us

Although the tobacco ads will not be visually appealing, hopefully they will appeal to those who have forgotten how deceitful the tobacco industry is. “Not only the fact that they lied about the products but also the fact that the products they were selling to the American people were engineered to be addictive as possible,” said Robin Koval, CEO and president of Truth Initiative.

For many health advocates, the only future for Big Tobacco is no future. But where they go from here depends largely on us and how likely we can kick the nasty cigarette habit. For the millions of people who have died due to first- and second-hand cigarette smoke, these ads come a little too late.

If you’re a smoker, are these ads compelling enough to make you quit?