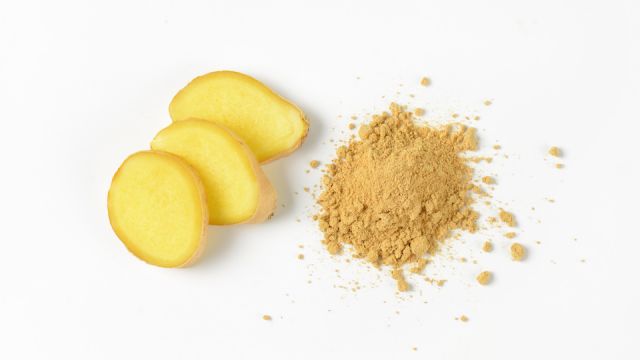 The use of ginger as a medicinal aid spans back hundreds of years in time. Common historical uses of this root include easing digestion, reducing nausea, and fighting off the flu and the common cold. Modern research supports the power of ginger as a remedy for several common conditions, and some of its benefits may even surprise you. Let’s take a closer look at the superpowers of this aromatic root.

What gives ginger its power?

Ginger belongs to the Zingiberaceae family and is a close relative of turmeric, cardamom, and galangal. It can be used fresh, dried, powdered, or as an oil or juice.  A common ingredient in many delicious recipes, ginger has a unique aroma, and flavor that comes from its natural oils. The most active oil in ginger is known as gingerol. Gingerol is the main bioactive compound in ginger, which is responsible for many of its medicinal qualities. This natural oil has both anti-inflammatory and antioxidant properties.

What else can ginger do?

Many therapeutic benefits of ginger are backed by science. Here are some of the top reasons to eat more ginger daily.

Ginger can stop nausea in its tracks

When you think of ginger, apart from using it to flavor food, you probably think of its ability to ease nausea, especially nausea associated with pregnancy. It is true that one of the most effective anti-nausea remedies for pregnant mothers-to-be is ginger. A review of 12 studies and 1,278 pregnant women showed that women who took 1.1 to 1.5 ounces of ginger had a significant decrease in nausea. Note: Always talk to your physician before consuming ginger while pregnant.

Clinical trials show that ginger is indeed highly effective against other forms of nausea as well. Sailors have relied on the powerful anti-nausea capabilities of ginger to ease seasickness. There is even some evidence showing that it is equally as effective as nausea prescription medicine.

The anti-nausea capabilities of ginger don’t stop with seasickness and pregnancy. Ginger may also remedy nausea and vomiting that can occur after surgery, and in cancer patients going through chemotherapy.

Ginger may boost brainpower and protect against Alzheimer’s

Want to think more clearly, remember more, and boost your brainpower? Science shows that ginger might be the answer. Research has revealed one of the key inducers of aging and Alzheimer’s to be oxidative stress and chronic inflammation. According to some animal studies, ginger contains antioxidants and bioactive compounds that can restrain inflammatory responses within the brain.  In one study, 60 middle-aged women consumed ginger extract. It was shown to improve both their reaction time and working memory. Additional animal studies show that ginger can protect against reduced brain function as a result of aging.

Bad cholesterol or LDL lipoproteins have been associated with an elevated risk of heart disease. The type of diet you eat has a powerful impact on LDL levels. A 45-day study of 85 people with high cholesterol, found that 3 grams of ginger had a notable impact on cholesterol markers. An animal study found that elevated cholesterol levels in hypothyroid rats were reduced comparitively to the cholesterol-lowering drug atorvastatin. In both studies, total cholesterol and blood triglycerides were also reduced.

If you hit the gym a little too hard and find yourself stuck in recovery phase and nursing sore muscles, ginger may hold the answer to your pain. In one study, it was found that consuming 2 grams of ginger daily for 11 days had a significant impact on muscle-related pain. It is believed that the anti-inflammatory properties found in ginger help to reduce the day-to-day progression of muscle pain.

Raw ginger contains a large amount of the substance 6-gingerol that has anti-cancer properties.  When 30 participants (who were at normal risk for colon cancer) in a study consumed 2 grams of ginger extract per day, they had markedly reduced pro-inflammatory signaling molecules in their colon. Although the same results were not achieved in people at high risk of colon cancer, there is evidence that ginger may be effective against other cancers. These include pancreatic, breast, and ovarian cancer.  More research is underway regarding ginger extract as a tool in the fight against cancer.

Many women experience significant pain, known as dysmenorrhea, along with menstruation. Traditionally, ginger has been used to help ease the pain of menstruation. This use is now backed by science. In this study, 150 women took 1 gram of ginger powder per day for the first three days of their period.  In this group, ginger reduced pain as well as ibuprofen and the drug mefenamic acid.

The main ingredient in ginger can help fight infections

Gingerol is so powerful that it can help keep infections at bay.  Studies even show that ginger extract can discourage the growth of numerous types of bacteria. Gingerol appears to be especially powerful against oral bacteria that can cause inflammation-induced diseases in the gums, including gingivitis and periodontitis. Fresh ginger has been found to be effective against RSV viruses that can cause respiratory infections.

How to enjoy more ginger

Making your own ginger tea is easy and incredibly soothing. It’s especially useful to sip on when you have a cold, the flu, or a sore throat. All you need is a one-inch piece of fresh grated ginger and two cups of water. Boil your ginger for about 10 minutes for a mild flavor, or up to 20 minutes if you’d like it spicier. Once this is done, strain out the ginger. You can add a little raw, organic honey or lemon juice if you’d like for extra flavor.

Add ginger to your smoothies

Ginger can be added to many different types of smoothies too. It adds a warming spicy flavor to a fruit smoothie, working especially well with citrus fruits like pineapple, lemon, lime, and orange. It also goes well with vanilla bean and banana. You might even want to add other spices like nutmeg or cinnamon.

This pumpkin pie smoothie that incorporates these fantastic spices is a great one to try.

Blend all ingredients except ice until totally smooth. Add ice and blend again.