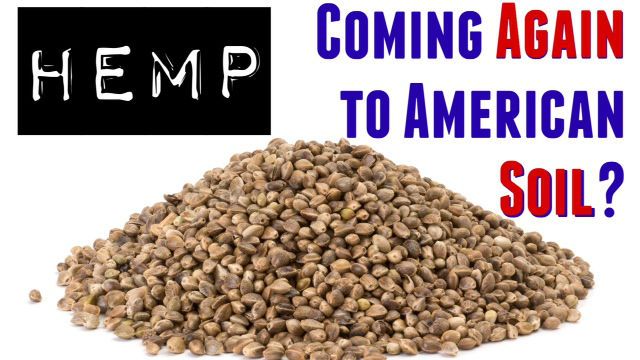 Hemp, an extremely versatile, environmentally friendly crop that has been demonized and outlawed on the federal level since the 1930’s because of its relationship with marijuana, may finally be on the verge of being accepted back into American industry.

In breaking news from Louisville, Kentucky, DEA authorities have agreed to release a 250 pound shipment of hemp that was being held by customs agents to the Kentucky Agriculture Department, for use in an industrial pilot project.

According to James Comer, the Kentucky Agriculture Commissioner, “the farm bill clearly states that we have the authority in Kentucky because we passed state regulatory framework, to be able to conduct pilot projects with research universities like the University of Kentucky.” Currently, nine US states allow industrial hemp farming, but it is not widely practiced, likely due to the red tape and stigma surrounding its use.

After Commissioner Comer stated his intention to take the DEA holding the hemp seeds to federal court over the matter, the DEA agreed to release the seeds by the end of the week, after the Agriculture Department completes an import permit. The DEA stated that it will expedite this permit’s approval, so that the seeds can be planted on time.

This decision sets an important precedent for other states, and is great news to those who recognize the value of hemp and the benefits that its use has for our health and for our planet. Hemp may just be one of the most beneficial crops on Earth.

It is a resilient, hardy plant which does not require much water, and can be easily cultivated without pesticides and herbicides. In warm climates, it can be harvested twice a year.

Nutritionally, hemp seeds and hemp oil have a wide array of benefits, including omega-3, omega-6 and omega-9 fatty acids, as well as the essential fatty acid GLA. The seeds are high in protein, easily digestible and have notable anti-inflammatory properties. They are also extremely heart healthy, and may even reduce the risk of certain cancers.

Industrially, hemp can be manufactured into a completely biodegradable plastic, made into paper and clothing, and can also be used in a hemp biomass fuel that does not produce sulfur, and offers a much cleaner power source than many that we are currently using. These examples are just the tip of the iceberg when it comes to the many uses of hemp.

Those who think that hemp and marijuana are one and the same have not done their homework. While both are varieties of the Cannabis Sativa L. plant, industrial hemp has THC levels so low that it would be impossible to get ‘high’ from it.

The plant also contains a compound that actually blocks THC. Therefore, those who think that the widespread cultivation of hemp would equate to marijuana-smoking are sorely mistaken.

Kentucky is not the only state taking action towards bringing back hemp. In late 2013, California’s governor signed a law giving California farmers the right to grow industrial hemp at the state level as soon as the federal government approves. While it may seem like a small step, as federally there is a long way to go, it signifies that more and more people are taking notice of hemp’s huge potential.

If this important crop is fully legalized and becomes a widespread industry in the US, we could see many of our environmental problems diminish, and now is certainly the time to focus on the health of our Earth, and support a sustainable industry from this renewable, multifunctional resource.

“Make the most of hemp seed, grow it everywhere”– George Washington, 1794