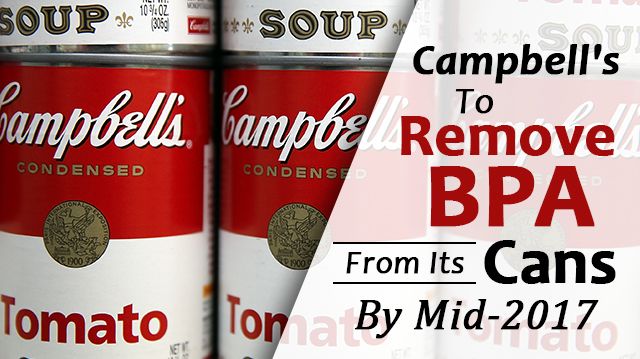 Campbell’s, the North American producer of canned soups, began using cans with lining made from BPA-free acrylic or polyester materials in March 2016, and will continue to introduce the new linings throughout the US and Canada in 2017.

“Our decision to speak publically about our current timeline is driven by our belief that providing transparency into our business is critically important to the people who purchase our food and beverages,” announced Mark Alexander, president of Americas Simple Meals and Beverages, which includes Campbell’s US retail and foodservice businesses.

The report further suggests that Campbell’s, as well as Kroger’s, are food industry leaders who have the power and a moral responsibility to get toxic chemicals like BPA out of food packaging.

Alexander claims Campbell’s has been talking to the Breast Cancer Fund for many years about this issue and realized the company needed to be more open about the steps it is taking to eliminate BPA packaging, rather than waiting to tell consumers after they had completed the transition. But the transition to BPA-free cans is taking longer than expected. Campbell’s first announced it would move away from BPA-lined cans in 2012.

“Today, we are not where we would have hoped to be when we made that announcement,” says Alexander, who cites three reasons for not meeting the challenge within the timeframe:

Campbell’s has pledged to reduce its use of BPA plastic in food cans, claims the Breast Cancer Fund, yet a new report found that most of its cans sampled still tested positive for this harmful chemical. In its report, the Breast Cancer Fund included a message for loyal Campbell’s customers to “act now” and urge the soup giant to eliminate and safely substitute toxic BPA in the lining of its food cans.

Why should consumers be concerned about BPA?

Research shows that BPA can seep into food or beverages from cans lined with BPA plastic. The US Food and Drug Administration (FDA) has expressed some concern over the effects of BPA on the brain, behavior and prostate gland of fetuses, infants and children, suggests the Mayo Clinic. This presents a particular concern for women of childbearing age and parents with young children.

But how can you tell if manufacturers like Campbell’s are using a BPA plastic lining in their cans? A resin code marked “7” should appear on plastic containers indicating that it may be made of a BPA-containing plastic.

The FDA states that BPA is actually safe when it occurs in very low levels in certain foods. However, it continues to review and support ongoing research. In the meantime, consumers who are concerned about BPA can take these steps to reduce exposure:

To date, two million non-BPA cans have been manufactured, and Campbell’s is making significant strides, says Alexander. Apparently, 10 million more cans will be manufactured in April and the company will continue to transition to non-BPA cans until all soup cans have acrylic or polyester linings.

However, according to Alexander, “We still face technical challenges, especially on some of our tomato-based products and on other packaging which use BPA coatings.” Nevertheless, he promises to keep consumers updated about the company’s progress on the website whatsinmyfood.com, and is confident that all of Campbell’s products will be BPA-free by mid-2017.

But don’t expect to see a label anytime soon advising consumers that Campbell’s soup cans are indeed BPA-free. While the soup company is not initially labeling new cans, Campbell’s will consider doing so in the future, as its labels are updated over time. Let’s hope that Campbell’s stays true to its word, and doesn’t let the “bottom line” dictate what’s best for its valued customers. Hopefully, more manufacturers will follow suit.