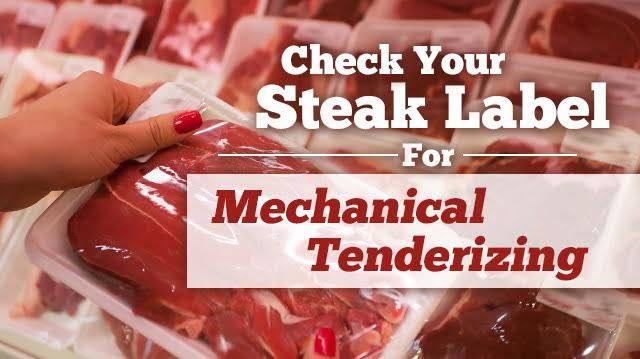 Memorial Day weekend is the unofficial start of the outdoor grilling season. If you’re firing up your grill and just waiting to throw steaks on it, step back a minute. Check the label on the meat’s packaging. If it has been mechanically tenderized, maybe you should go out to dinner. Mechanical tenderizing potentially leads to contamination that can make you, your family and guests quite sick.

Consumers demand tender beef, which led meat processors to mechanical tenderization. Mechanically tenderized meat has been run through machines and punctured with needles or blades to make it easier to chew. The metal breaks down the muscle fibers. It doesn’t look different from conventional beef — it’s not like the surface is full of holes or tears.

The process isn’t new, but federal labeling mandates recently went into effect. Approximately 11 percent of all beef sold commercially, for either individual consumer or restaurant use, is mechanically tenderized. Those cuts typically sell for 10 percent more than non-tenderized beef.

The United States Department of Agriculture (USDA) mandated the mechanical tenderizing labels on meat packages as of May 17. That means you don’t know if any steaks you purchased earlier than two weeks ago and kept in the freezer underwent the process. Note that the USDA has known since 1999 — 17 years — that mechanically tenderized meat requires different cooking practices to eradicate pathogens, but the warning labels are just now going into effect.

How does mechanical tenderizing contribute to possible meat contamination? If there are pathogens on the meat’s surface, the mechanical puncturing allows them to enter the meat’s interior. Without thorough cooking, the bacteria survive and can harm anyone eating the meat.

Because of the possibility of pathogens, the USDA has issued guidelines on cooking mechanically tenderized meats. It’s crucial to cook the meat thoroughly. If you like your steak raw, practically “still mooing,” you really don’t want to purchase mechanically tenderized meat. The label may include cooking instructions such as, “Cook until steak reaches an internal temperature of 145°F as measured by a food thermometer and allow to rest for 3 minutes.” It’s likely a food thermometer isn’t currently part of your grilling equipment, but if you’re cooking mechanically tenderized meat, it should be. The National Cattlemen’s Beef Association worked with the USDA on the required labeling.

Since 2000, the US Centers for Disease Control and Prevention (CDC) has tracked outbreaks of diseases related to mechanical tenderization. In 2009, 21 people in 16 states developed infections with the most dangerous strain of E. coli, O157:H7, over a three-month period. According to CDC reports, most of the affected individuals had consumed beef in restaurants. Nine people were hospitalized, and one person was diagnosed with potentially fatal hemolytic uremic syndrome. However, there were no deaths in this outbreak.

The beef was linked to nearly a quarter million pounds of meat recalled by the USDA’s Food Safety and Inspection Service (FSIS) from the National Steak and Poultry Company. “The recall was issued after FSIS determined there was an association between non-intact steaks (blade tenderized prior to further processing) and illnesses in Colorado, Iowa, Kansas, Michigan, South Dakota and Washington,” according to the CDC.

Reported cases of E.coli or Salmonella infection are just the tip of the iceberg. Only 10 to 25 percent of people become sick enough to visit the doctor and receive a diagnosis. For the other 75 to 90 percent, they spend several days feeling unwell “because of something they ate,” and may not realize what it was that made them sick. For every case of contamination confirmed by a lab, there are an estimated 26 other cases that go unreported.

If you only consume organic beef, that doesn’t mean you don’t have to worry about mechanical tenderizing. The standards for USDA organic beef do not prohibit the process. Companies that inject marinades into certain cuts are mechanically tenderizing under USDA regulations.

This summer, fire up the barbecue, get the steaks out and grill away — but grill ’em good. Don’t forget that food thermometer…