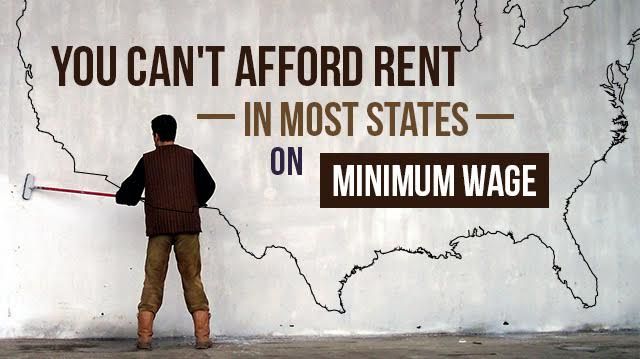 If you make minimum wage, you can’t afford to rent a two-bedroom apartment in any state in the union. That’s the harsh but honest truth in a report issued last week by the National Low Income Housing Coalition (NLIHC).

You might expect that’s the case in major, expensive cities such as New York, Los Angeles or San Francisco. However, the report shows that no single person making minimum wage can afford a market-rate two-bedroom apartment anywhere in the United States if they pay the standard 30 percent of their income on housing.

Far above the minimum

A person earning the federal minimum wage would have to work 112 hours per week, the equivalent of nearly three full-time jobs, in order to afford a two-bedroom apartment. That means the worker’s life would consist only of working and sleeping eight hours a night.

In six states and Washington, D.C., a worker must earn at least $25 an hour to afford a market-rate two-bedroom apartment. Below are the six states:

In Hawaii, a person must earn at least $34 per hour to afford a two-bedroom apartment.

The least expensive states for renters usually adhere to the federal minimum wage of $7.25 per hour:

Nationwide, the “housing wage” for a two-bedroom unit is $13.05 higher than the federal minimum wage of $7.25, and $4.88 higher than the estimated average wage of $15.42 earned by renters, according to the NLIHC.

Of course, many low-income people manage by paying more than 30 percent of their income for housing. That leaves them less money for necessities such as food, clothing and health needs, and virtually nothing for saving. As a result, a job loss often means homelessness quite quickly, as they don’t have the funds to temporarily tide them over until new employment is found.

One way to help solve this affordable housing crisis is by allocating money to the National Housing Trust Fund (NHTF). Overseen by the US Department of Housing and Urban Development (HUD), these funds are available as block grants to communities for the first time this year. Each state must meet two minimum conditions to qualify for NHTF funds:

While raising the minimum wage would help low-income workers, in many areas even a substantial raise would not make housing affordable. In addition to NHTF funding, the NLIHC recommends expanding housing vouchers, as well as increasing and improving public housing, and increasing funding for other affordable housing initiatives.

Low-wage workers face a genuine housing crisis. Lawmakers and the public must come up with solutions so that every worker has a roof over their head.