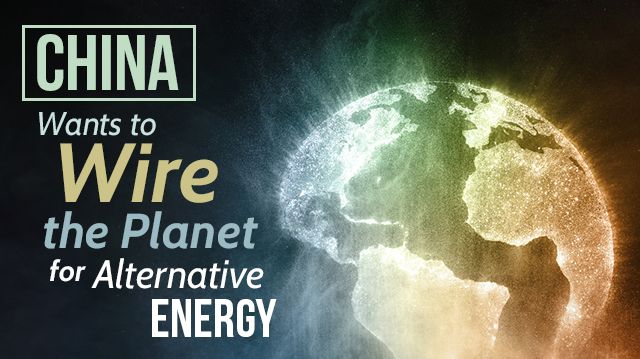 If this is what we can expect from China’s rise as a global power, bring it on! The Asian giant is proposing a $50 trillion global energy grid as a method of combating climate change, pollution and energy scarcity. The grid, to be called, the Global Energy Internet (GEI), is more practical than one might think at first glance.

The backbone of the system is the ultra-high voltage (UHV) grid that China already uses to provide energy produced in rural areas to its major cities. The grid operates at 800kV to 1,000kV, compared to energy systems in the United States and Europe, which carry about half that voltage. The increased capacity of this grid allows large amounts of energy to travel over long distances with minimal loss.

China has been at the forefront of the alternative energy revolution. The country had a 433 gigawatts renewable energy capacity in 2014. The United States held second place at 182 gigawatts. China produces about 17 percent of the world’s solar energy and is home to nearly one third of the world’s wind turbines. Though fossil fuels are still China’s No. 1 source of energy, making up 61 percent of consumption in 2014, no country is doing more to enact planet-friendly change.

The GEI is China’s plan to export its energy success so far to the rest of the world. The aim is to create a world where wind energy from the polar regions and solar energy from massive deserts can be harnessed and distributed to major cities worldwide.

The project could be completed by 2050 and would be the largest infrastructure project ever. The ambitious plan aims to provide 80% of the world’s energy via clean, renewable sources distributed globally. The idea has gained international attention with the 2015 release of a Global Energy Internet, a book authored by Liu Zhenya. Chairman of the State Grid Corporation of China, Liu has been introducing the concept at various world conferences in an attempt to generate international support.

His plan doesn’t require a global compact quite yet. Ideally, cross-border agreements can get the system started by 2020, with cross-continent structures in place by 2030 and global plans negotiated by 2050. International coordination and cooperation of this extent will be challenging, yet Europe’s success in linking national power grids shows that it is possible.

The United States has been reluctant to implement a switch to higher voltage systems. U.S. companies instead have concentrated on innovation that can extend and improve upon our current infrastructure, which uses high-voltage transmission of between 500kV and 765kV.

Lui Zhenya and the State Grid Corporation of China are not the only people advocating an internet of energy. John Whitney, founder of the Clean Energy Action Project, provided an in-depth, critical evaluation of the U.S. energy transmission system and industry in a 2011 article entitled Ultra-High Voltage Transmission Could be Our Renewable Energy Interstate. And U.S. economist Jeremy Rifkin proposed the idea of an interconnected energy grid in his 2011 book The Third Industrial Revolution.

Rifkin concentrates on small-scale, local energy production that could be shared through an internet-like grid of electricity transmission. In contrast, Lui’s plan concentrates on large-scale energy projects at strategically placed, energy-rich sites. The two ideas could easily complement each other given advances and investment in appropriate infrastructure.

Germany provides an interesting real-world example of the Rifkin system. More than 1,100 companies harness and provide energy competitively. Many of these are small cooperatives generating green energy for local use, with extra volts sold back into the grid for use elsewhere.