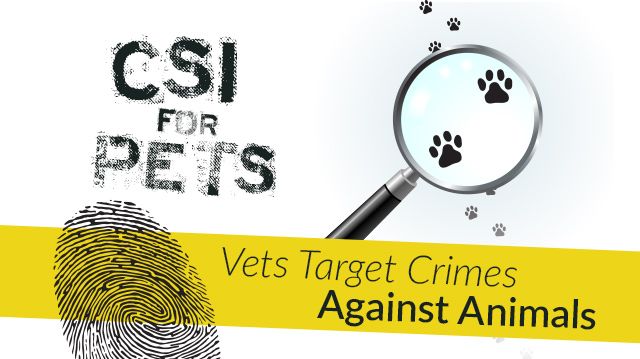 While DNA has been used in human criminal cases for decades, it’s only in the past several years that this important tool has become a factor in crimes against animals.

Forensic veterinary science is a relatively new field. It includes examinations, evidence collection and emergency shelter components. It differs from the role of a human medical examiner in that forensic veterinarians deal with live animals more often than dead ones.

Local animal protection agencies and many law enforcement agencies don’t have the resources to investigate large-scale animal cruelty investigations. That’s when mobile veterinary forensic specialists come in. National organizations such as the ASPCA maintain a forensic science team to aid law enforcement in evidence collection and analysis, and private veterinary forensic consultants also do this type of work.

The investigation starts at the scene of the crime, whether it’s a dog- or cockfighting situation, starvation or any other type of abuse or neglect. Veterinarian Melinda Merck of Veterinary Forensics Consulting LLC explains that “animals should be fully examined at the scene to gather evidence that is timely and reflective of the animal’s condition at the scene.”

The animals in the worst shape are examined onsite by an Animal Evidence Team. Those in less dire straits should go to local shelters, where a medical team awaits them. A veterinarian must make the decision regarding the triage situation. The decision to euthanize animals in poor condition depends on state law, which generally requires the approval of a state-licensed veterinarian as well as the case’s lead veterinarian.

Evidence gathering consists of photographing each animal and obtaining photos and videos of the scene, taking DNA samples, physical examination and blood testing of each animal, and subsequent medical reports.

Dead animals found at the crime scene should undergo necropsy — the animal equivalent of an autopsy. A temporary morgue with refrigeration capabilities must be established. Tissue samples are sent to a veterinary pathologist. If there is a grave or areas where bodies have been dumped, the investigation’s Animal Evidence Chief must approve excavation and processing.

In 2010, the University of California, Davis’ Veterinary Genetics Laboratory Forensics Unit was the first animal crime lab accredited by the American Society of Crime Laboratory Directors/Lab Accreditation Board – International. It provides services to the general public, as well as local, state and federal law enforcement agencies. Its website notes that forensic DNA testing can identify an animal as a victim, perpetrator or witness. While animals involved in cruelty or lost or stolen pet investigations are obviously victims, animal perpetrators include:

Animals may also be witnesses to crimes. Who can forget accounts of Nicole Brown Simpson’s Akita’s eerie howling at the time of the killing of his owner and her friend Ron Goldman? Her neighbor testified in the O.J. Simpson murder trial that, while walking his dog at approximately 10:55 that night, the Akita appeared with bloody paws and followed him. “It would howl at every house we passed. It would stop and bark down the path,” he said, according to Time magazine.

An animal witness can link a suspect to a crime through hair and bodily fluids.

The Canine Codis — developed by the ASPCA, the UC Davis Veterinary Genetics Laboratory, the Missouri Humane Society and the Louisiana SPCA — is a database developed from dogs seized from dogfighting rings. The idea is to identify canine relatives, allowing investigators to broaden investigations to people breeding and training fighting dogs. Animals seized in such situations have their cheeks swabbed and the sample is sent for DNA testing. It is then included in the database, and if matches are found, the information is sent to prosecutors and law enforcement looking into related dogfighting cases. The Canine Codis is not used for any type of breed-specific legislation.