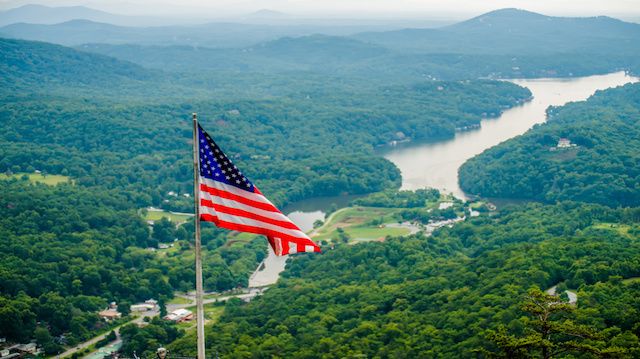 It’s a commonly held belief that America is “the land of the free,” the very embodiment of opportunity and a country where you can find your place in the world and realize your dreams. When it comes to public access, however, it seems that this notion falls flat on its face.

An article recently published on Treehugger.com touched upon this very subject and abruptly brought to the surface something that had been subtly bothering me for some time in my travels through America. While traversing this great nation, I had become increasingly disenchanted by a lack of access to natural and cultural attractions and points of interest, often being brought up short by unfriendly, sometimes downright threatening, signs proclaiming the inaccessibility of this private property or that government-owned land. I continually experienced a notable lack of freedom in a nation that prides itself as a bastion of liberty.

Where once we walked…

There was a time not so long ago that people placed great value in our legs. Not only did they carry you from A to B, providing an essential means of transport without which life would be very difficult indeed, they also enabled you to make something of yourself.

American history is riddled with inspiring stories about pioneers who invited fame into their lives and helped to shape a nation by climbing lofty peaks, conquering remote passes and traversing impossible distances. And how did these giants of history achieve such feats? Why, they walked, of course. Yes, they may have been aided by mules and local Native American guides, but they set out on their journeys with the sound understanding that they would be relying on their own two legs to discover new lands and unveil new wonders.

The exploits of explorers such as Boone, Lewis and Clark manifested themselves in the consciousness of a burgeoning America and gave rise to a great reverence for pedestrian prowess. During the early to mid-nineteenth century, the sport of pedestrianism became wildly popular, culminating in 1867 when Edward Payson Weston won a $10,000 prize for walking over 1,200 miles from Portland, Maine, to Chicago in 26 days. He did this in the characteristic style of the time, dressed in his best and stopping occasionally to make speeches and attend church services.

There’s something about this can-do attitude that really appeals to me. It belies a deep-seated belief in one’s own ability to achieve great feats, with nothing else but a pair of sturdy shoes and a brisk determination. Sadly, this mentality appears to have largely dissipated in today’s society, with our inspiration and respect having now shifted from endurance exploits of the body to a reverence for technology and gadgetism. These days in America, getting from A to B is considered based on accessibility by car, plane or train.

This mentality shift is best seen in the case of malls and suburbs. American malls are great sprawling beasts, encompassing hundreds of acres of land in order to accommodate vast parking lots. There’s something about these parking lots that just doesn’t make sense, as you’d think that a large parking lot would have people walking long distances to get inside the malls. But if you stand there and watch for a while, you’ll notice that people are strangely desperate to park as close as humanly possible to the mall entrance. They’ll circle around and around the parking lot for a ridiculous period of time in order to secure a spot that is just 30 feet closer to the entrance than the last spot they saw. Other drivers will sacrifice themselves by dropping off the members of their car and walking alone post-parkup, embittered by their need to walk those extra 100 feet to reconnect with their gang.

There’s a strange fear of walking that permeates throughout the country, and it’s helping the case for inaccessibility.

The notion of private property

The second prong in the two-point attack against pedestrian access is the growing triumph of private property over public land in America. As the population continues to grow, cities and towns are sprawling further afield and developments are slowly but surely beginning to take over once-remote, predominantly natural areas. Unsurprisingly, these developments and municipal offshoots tend to concentrate around locations with strong aesthetic value — lakes, rivers, beaches and forests.

While the residents of these developments might thoroughly appreciate the view that greets them every morning when they open the curtains, this urbanization of natural features creates a serious conflict of interest. Those who don’t live in those areas and want to gain access to the natural features that have been built around suddenly find themselves unable to walk to those features. The features themselves are public property, and by rights are there for all to enjoy, but in order to enjoy those features, the non-resident must trespass through private property.

This creates a real dilemma for the nature lover, who must either make the decision to abandon their intended exploration of said feature or break the law by walking across someone else’s property without prior consent. That’s not a choice someone should be forced to make, but it’s happening across America and with little consideration from municipal planners, who should really know better.

Those areas that do offer public access to natural features are predominantly managed as national or state parks, particularly in close proximity to cities or towns. While I have no beef with the excellent jobs these folk do to keep these parks and natural areas in good shape, the vast majority of them require a payment to enter. So now we are presented with three options for accessing natural features and areas of cultural significance: trespassing, paying or simply not going there in the first place.

Having traveled much of the world and seen how other countries do things, the notion that I might have to pay to go for a swim at the lake, skip a stone at the river or soak up some sun at the beach is hard to swallow. It seems very strange indeed that one should have to pay to access something that belongs to all the people of America.

Europe has long supported its people’s rights to natural features and continues to do so through modern statutes that guarantee public access to these areas. At the turn of the millennium, the United Kingdom passed the Countryside and Rights of Way Act, which protects its people’s “right to roam,” essentially legalizing public access to “mountain, moor, heath and down.” Germany officially allows pedestrian access through privately owned forests, unused meadows and fallow fields. In Sweden, the government reserves the right to prevent landowners from erecting fences that are designed for the sole purpose of keeping people out. Scotland passed a land reform in 2003 that essentially opened up the entire country to recreational use, meaning people can enjoy activities such as mountain biking, kayaking, swimming and camping without fear of trespassing as long as these activities are carried out “responsibly” and without the aid of motorized vehicles.

As you can see, legal protection of public rights of way is not an uncommon concept, and indeed much of the Western world has recognized its importance and taken steps to ensure that people can walk to and through nature. So why is it that America refuses to ensure that it’s people have those same infallible rights? Well, the answer lies in what we’ve discussed above — a nation that is increasingly infatuated with driving, which looks down upon walking as something you do if you can’t afford a car and a growing acceptance in the privatization of property.

I can’t help but get the feeling that it all comes down to capitalism and its ever-tightening stranglehold of the United States. Don’t get me wrong — capitalism, when it works, is a fantastic modus operandi. But America’s need for wealth and power has transgressed far beyond the simple ideologies of capitalism, causing people to prioritize material possessions and land acquisition over things such as liberty and the rights of the commons. This emphasis on individual wealth now exceeds any notions of shared rights, and the result is that we no longer even raise a finger when yet another natural wonder becomes lost to the common man.

Addressing the situation thus requires a dramatic change in the way we think. We should be looking to Europe and other, more open-minded countries to gain inspiration and see that allowing public access through private property does not necessarily mean that this property will be vandalized or despoiled. In general, people respect other people’s property, and they’ll respect it even more when they know that a landowner is providing their property for the enjoyment of others. Furthermore, as evidenced in European legislature, land-use laws can promote the use of natural lands while protecting the rights of landowners. It doesn’t have to be a one-sided system.

At the end of the day, something as wondrously wholesome as a walk through a forest or a swim at the lake shouldn’t be a criminal offense. America is the land of the free, and it should stand behind this claim when it really matters.

Not yet convinced of the importance of fighting for your right to access nature? Here are four reasons why spending time in nature is a vital part of being a healthy human being.