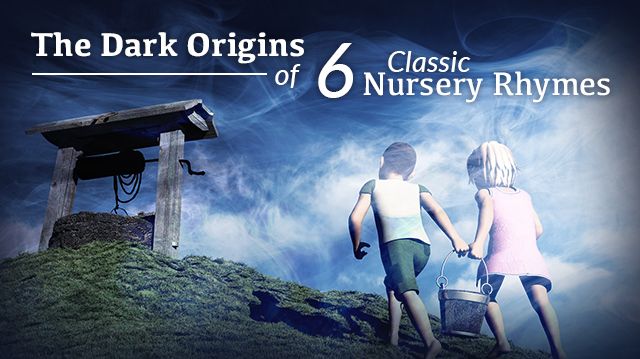 Murder, political intrigue, scandal. Many of the songs and poems we recite to children originated from events that are hardly appropriate for a nursery, and yet their catchy nature and rhyming structure keeps them alive. Here are six rather grim origins to some of our favorite nursery rhymes.

Jack and Jill went up the hill

To fetch a pail of water.

Jack fell down and broke his crown,

And Jill came tumbling after.

Seems innocent enough, right? Not if you’re royalty. Many attribute the nursery rhyme’s inspiration to King Louis XVI and Marie Antoinette, who were found guilty and beheaded during the French Revolution. Yet it’s likely the rhyme originally was about England’s King Charles I. When he ascended to the throne in 1625, Charles almost immediately reformed the measurements on liquids in order to raise more tax revenue for his kingdom. He first scaled down the jack and then the gill—also spelled jill—which was twice the size of a jack, automatically followed so it “came tumbling after.”

London Bridge is Falling Down

London Bridge is falling down,

London Bridge is falling down,

Take a key and lock her up,

Take a key and lock her up,

Apparently this one is either about children starving to death or a Viking attack. Some historians believe it’s a reference to immurement, the practice of entombing a person into a structure when it is built. When a person is sealed in, they die slowly by starving to death. Those who practiced this atrocity believed the person would serve as an “eternal watchman” to guard the structure, such as London Bridge. Others think that the rhyme references an attack by Vikings in 1014. Historians debate whether Olaf II of Norway actually attacked and destroyed London Bridge, but it’s possible the Vikings themselves wrote the song to spread the word of their military might.

How does your garden grow?

With silver bells, and cockle shells,

And pretty maids all in a row.

And now we begin the analysis of Bloody Mary-bashing rhymes. Queen Mary I of England, daughter of Henry VIII and his first wife, Catherine of Aragon, ascended to the throne after her half-brother Edward VI passed away and his cousin, Lady Jane Grey, was executed after a reign of nine days. Mary’s religion ran “contrary” to that of her father. She was an ardent Catholic and was renowned for torture and killing non-Catholic, acquiring the name Bloody Mary as a result. “Silver bells and cockle shells” are in fact instruments of torture. Silver bells crushed the thumb between two hard surfaces that were drawn together by tightening a screw. Cockle shells were instruments that were attached to the genitals. Finally, the reference to “pretty maids all in a row” may actually refer to the “maiden,” a crude, pre-revolutionary guillotine.

They all ran after the farmer’s wife,

Who cut off their tails with a carving knife.

Did you ever see such a thing in your life,

Bloody Mary is the farmer’s wife in this nursery rhyme; she and her husband, King Philip of Spain, owned several massive estates. The three blind mice were three Protestant bishops who conspired unsuccessfully to overthrow her for her sister who would become Queen Elizabeth I. Hugh Latimer, Nicholas Radley and the Archbishop of Canterbury, Thomas Cranmer, are the “blind” mice whose “tails” were cut off by Mary’s knife. This rhyme was probably crafted by Mary’s supporters as it seems to poke just a bit of fun at her, while it mocks the bishops as lowly mice.

And Kitty Fisher found it.

Not a penny was there in it,

Only a ribbon round it.

Singing about prostitutes is totally appropriate for a newborn, right? Lucy Locket was a real woman in the 18th century who worked as a barmaid and prostitute. As legend tells it, when one of her wealthy patrons lost his money, she quickly discarded him—he’s the “pocket” in the rhyme. Lucy’s rival, Kitty Fisher, hooked up with him, despite the fact that he was penniless. The “ribbon” is a reference to the fact that prostitutes tended to keep their money tied to their thigh with a ribbon, a blatant accusation that Lucy was more prostitute than barmaid.

Went to the cupboard,

To get her poor doggie a bone.

When she got there,

The cupboard was bare,

So the poor little doggie had none.

When Henry VIII wanted to divorce Catherine of Aragon, he turned to Cardinal Thomas Wolsey to facilitate the divorce. Cardinal Wolsey wouldn’t grant the king a divorce or annulment from his first wife, but Henry ultimately had his way, just not through Wolsey. The “doggie,” therefore was the king himself, and the “bone” was the divorce, while the “cupboard” was the Catholic Church.

So the lesson here is that even the cutest songs we read or sing to our children may have a dark meaning hidden within their lyrics. There are scores of other grim nursery rhymes that harken back to rougher days of old. Do you have a favorite?