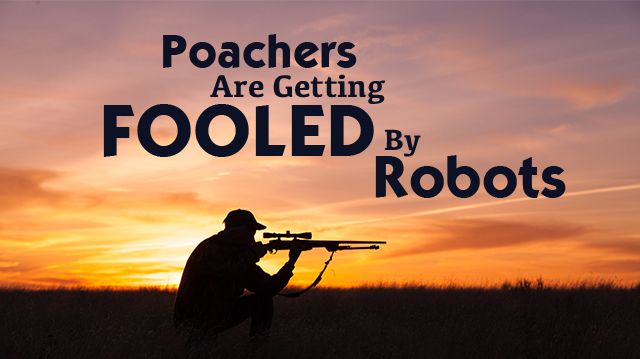 Often when we imagine poachers, we picture men in khaki vests holding up the carcasses of rare and exotic beasts while grinning from ear-to-ear. But poaching isn’t just a problem on the African savannah. The truth is, the illegal killing of wildlife is a huge domestic problem, too, one that contributes to the needless death of tens of millions of wild animals each year, according to officials.

The U.S Fish and Wildlife Service estimates that the unlawful poaching and selling of animal-derived skins, medicines, furs and pets is a multibillion dollar business. The Humane Society, for instance, estimates that a bear’s gall bladder sells for up to $30,000 on the Chinese black market, giving poachers an incentive to hunt bears out of season using illegal weapons or without permits.

Whatever the motivation, poachers are rarely caught in the United States. According to Oregon Fish and Wildlife Capt. Jeff Samuels, just one in 10 of poachers is apprehended. This is partly due to declining funding for Fish and Wildlife work but also because “there’s thousands and thousands of miles of road [poachers] can travel,” Samuels says. This makes tracking, locating and catching illegal hunters time consuming and difficult.

Luckily, Wildlife officials have come up with a cunning solution. By using robotic taxidermied animals, poachers are baited and caught by remote-controlled decoys.

All across the country, there is a small army of robotic animals being used by American Wildlife enforcement to apprehend those who hunt in the wrong place at the wrong time with the wrong weapons.

In an attempt to snare poachers, wildlife officials have been bringing fake robot animals to areas where illegal hunting has been reported. Using remote controls, officials place the decoys in the wild then hide nearby and wait for poachers to take the bait. Once the fake target is shot, game wardens rush to the downed robot to confront poachers with a hefty ticket.

The robotic decoys have been very effective, partly due to their realistic nature. They are made from the hides of legally hunted deer, fox, elk, bear, wolf and turkey, making them lifelike. To add to the robots’ believability, officers can move the mock animal’s’ head, tail and legs via remote control.

Of course, such a technological tactic doesn’t come at a low cost. According to Jim Reed of the Humane Society Wildlife Land Trust, an organization that donates the robotic animals to game wardens, decoy deer cost $2,000 and bears up to $5,000. Still, the steep upfront cost pays for itself in captured poacher fines. Wildlife officials say that the robo-wildlife brought in $30,000 in poacher money last year alone.

This sneaky strategy is becoming increasingly popular among game wardens, making animal robots a coveted commodity. Luckily, a single robot can be shot over 100 times before being laid to rest, needing only a new motor if hit by poachers. Damage only adds to the robo-animal’s believability, as wild animals are seldom clean or well-groomed. The strategy allows wildlife officials to apprehend poachers without the loss of animal life, too.

Anti-poaching activists hope that this tactic will be used to stop poachers internationally. Mike Kleman, owner of Robotic Decoys, a company that makes and sells robotic animals, says he hopes to be able to develop a robo-rhino in the near future. This could potentially curb the pervasive poaching of endangered animals and save them from complete extinction.

While animal decoys are working to effectively catch poachers, there may be a larger underlying issue that needs to be addressed. Whereas illegal wildlife trade can bring in thousands of dollars in prize money for a single animal, the fine for poaching is usually only a few hundred dollars. With this stark disparity, there is little deterrent for poachers. Perhaps there needs to be a harsher punishment to dissuade poaching in the first place.

Do you think there should be harsher punishment for poaching?