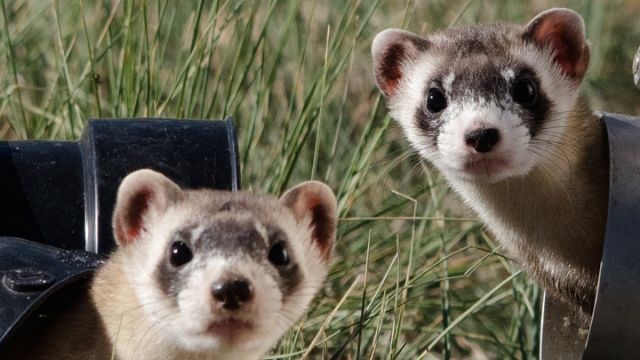 The black-footed ferret is in trouble. The kind of trouble that can wipe a species off the map. This particular species has been endangered since 1967, and at last count only 300 were known to live in the wild. This is after 20 years of conservation efforts spanning 27 reintroduction sites in North America. As evidenced by the numbers, attempts at saving the little critters have been wildly unsuccessful.

The sylvatic plague has thwarted conservation efforts. This is a wildlife plague derived from the same bacterium as the bubonic plague. It is pretty nasty — capable of wiping out the vast majority of a rodent population in only a few weeks.

The plague is transmitted by fleas. Most conservation efforts have concentrated on using pesticides to kill the fleas and prevent transmission. Given our plummeting ferret numbers, more needs to be done. This is especially true in recent years. The fleas are becoming resistant to our pesticides, making an immediate shift in tactics necessary.

Luckily, a new tactic is here. The USGS National Wildlife Health Center tested the same vaccine developed for human use against the plague on wildlife creatures. It was a huge success. Initial tests involved injecting the vaccine, but peanut butter laced goodies also do the trick. Prairie dogs are the vaccine target. Saving the ferrets is the ultimate aim.

Though scientists have known about the vaccine’s effectiveness since 2000, delivery methods left this tactic are woefully ineffective. Scientists have been mixing and delivering the healthy treats by hand. This is painstakingly slow at only 150 to 300 doses dispensed per hour. If we’re going to save the black-footed ferret, we need to do better.

That’s where the drones come into play.

Armed with peanut butter (and vaccine) coated pellets, candy drone raids on conservation areas will be significantly more effective. At a rate of one pellet released per second, drones are estimated to cover an acre every 50 seconds. At this rate, they can cover 60 acres in sweet  vaccinating goodness every hour. These numbers are moderate. Proponents hope that drones will be able to dispense three pellets at a time, allowing a single operator to cover roughly 200 acres an hour.

The actual distribution mechanism from the drone has been described as a “glorified gum ball machine” by Randy Machett, U.S. Fish and Wildlife biologist. The device will use GPS to drop a pellet – or three – every thirty feet.

The proposal is set for a September 1 approval. If the Montana trial goes as planned, we can expect candy raids for conservation to become a yearly event in several states.