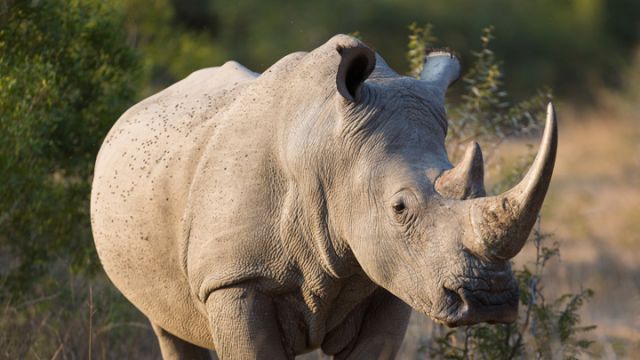 Dealing in rhino horn is a tantalizingly lucrative business. One kilogram (35 ounces) of a complete horn can bring in $60,000 on the illegal market. Another report found the horn of an Asian Rhino – which is typically smaller in size – can sell for $45,000. Whatever the exact price, one thing is certain: the markets favor poaching.

Falling rhino numbers further iterate this point. Of the Sumatran and Javan rhino species, fewer than 100 of each remain in the wild today. Black and greater one-horned rhinos in the wild count 5,455 and 3,500 respectively. The white rhino is doing relatively better at 20,700 in the wild. Even they are considered “near threatened.”

Poaching continues. In fact, the number of rhinos lost to poaching has increased significantly since 2008. Difficult financial times understandably lead to increases in poaching, as people struggle to make a living and support their families. In this case, however, the price surge is a more likely culprit. In 2006, a rhino horn sold for only $800. While that is still a lot of money for someone living in poverty, it is hardly the financial jackpot horn prices now command.

The price surge has been largely attributed to medicinal uses of the horn, many of which are based on fiction rather than science.

Several competing theories on conservation have ebbed and flowed in popularity over the years. Many conservationists want to protect the animals in national parks or through wildlife patrols. While sometimes successful, this strategy requires significant dedication and resources. Some countries are more able to provide this dedication and these resources than others.

An alternative approach is to legalize trade. Though more thoroughly explored in regard to ivory, this approach can also be applied to the rhino horn. The general idea is that by legalizing and regulating trade in various animal products, the governments where those animals reside will have reason to protect them. If a government is able to make money from the animal products, they will also the resources to do so.

The two camps have been battling it out for some time now. Alternative ideas, such as sawing the horns off preemptively without killing the creatures and releasing the animals back to the wild without their treasure, have not gained traction. Luckily, science may have a new answer.

Pembient deals in bio-engineered animal products, and they’ve engineered a rhino horn. The 3D printed product is virtually indistinguishable from the real thing. If anything, the structure is more pure. Horns grown in the wild may include irregularities that would not exist in the lab. Pembient plans to flood the market with this synthetic substitute, stopping the price surge in its tracks and saving the rhino.

Pembient isn’t going to to sell whole rhino horns. Instead, they plan to tackle the medicinal market directly. They’re selling powdered rhino horn. If the company succeeds in bringing down demand in this particular market, prices should decrease to pre-2008 levels. Hopefully, poaching will as well.

This strategy holds some critics at bay. Traditional conservationists generally critique market-based approaches on the basis that they could increase poaching. Since Pembient will only be selling the powdered form, people who deal in full rhino horns illegally will not be able to pass their goods off as legal products. Though they may be able to pass off powdered rhino horn as the legal alternative, the hope is that prices will be low enough to discourage this behavior.

The powder strategy hasn’t completely prevented criticism. The International Rhino Foundation and Save the Rhino are still concerned about potential side effects of any legal form of rhino horn.

Pembient hopes to have their 3D printed product on the market by next fall. The synthetic, powdered rhino horns are scheduled to be one-tenth the price of the real thing. If successful, this may open the door for other synthetic products as a means of animal conservation.

Fingered crossed for the rhino.