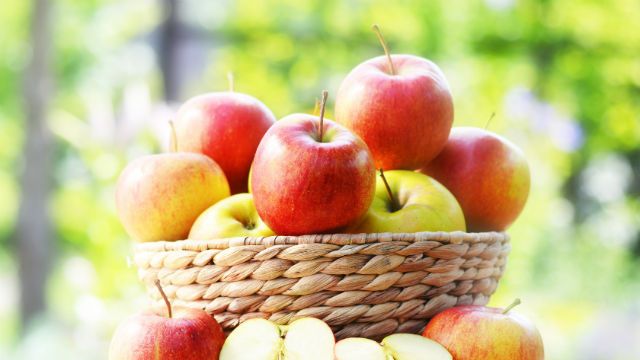 With the arrival of fall, the season not only brings crisp, autumn air and colorful foliage, but a favorite fall treat, apples. If you don’t know a whole lot about apples, other than that you enjoy eating them, these interesting facts come just in time for this wonderful change of seasons.

Apples have a high water and fiber content, which means that by eating an apple, you’ll feel fuller longer without adding a lot to your daily calorie count. Each one contains just 95 calories. Apples also have an extra advantage when it comes to weight loss. A recent study conducted by the University of Iowa found that a substance in the peel known as ursolic acid has been shown to increase brown fat in mice, thereby reducing the risk of obesity and the numerous harmful effects being obese can cause.

You don’t even have to eat an apple a day to reap great benefits. Consuming five or more per week is linked to better lung function due to an antioxidant called quercetin. A 2007 study revealed that women who eat apples may protect their growing baby from developing asthma and related symptoms.

Apples have been linked to an increase in acetylcholine production, a substance that facilitates communication between nerve cells, which may help improve memory and decrease your odds of developing Alzheimer’s.

Research back in 2004 found that a compound in apples helped prevent colon cancer in lab and animal studies. A 2007 study from Cornell University revealed that eating an apple peel a day just might keep cancer at bay, with researchers identifying a dozen compounds in apple peels with the ability to either inhibit or kill cancer cells in lab cultures.

More varieties than any other

So you know that apples really are very good for your health, but did you know that there are more varieties of apples than any other fruit? Apples are said to be the most popular fruit with some 8,000 different named varieties. That’s because each apple seed produces offspring that are different than its parents.

The crabapple is the only apple native to America. Jamestown colonists enjoyed apples, but not for eating. They brought their seeds and cuttings over from Europe, but many of those new apples were quite bitter, not much like the many sweet varieties we know today. In the early 17th century, the apples were used in colonial society for making cider. Due to sanitation concerns, they often served a fermented cider at meals instead of water, including a diluted cider for children.

The very first apple trees are said to have grown in what is now Kazakhstan some 30,000 years ago. The apple tree is believed to have been the earliest tree ever cultivated. Alexander the Great was credited for finding dwarfed apples in Kazakhstan in 328 BC, which he brought back to Macedonia. They’ve been an important food in Asia and Europe for many centuries.

Nope – it’s not the apple. Despite it’s popular place in American culture (“as American as apple pie”), the apple isn’t considered to be America’s favorite fruit. Banana consumption has surpassed that of the apple over the past four decades or so. Americans eat an average of 19 pounds of apples, compared to 28 pounds of bananas, although there are some 2,500 varieties of apples that are grown in 36 states.

Growing your own apple tree

Having your very own apples to pick off the tree each fall is a special treat, but if you decide to grow your own tree, keep in mind that it takes four to five years before it will produce its first fruit.

If you aren’t lucky enough to have an apple tree filled with apples this season, head to your nearest farmers’ market where you’re sure to find many different varieties to enjoy.