A study performed by Washington State University researchers highlights yet another danger of the banned pesticides that still linger throughout our environment decades after the discontinuation of their use – potentially higher risks of endometriosis.

Endometriosis is a chronic disease that affects about six to ten percent of women of reproductive age in America. It is characterized by uterine tissue growing outside of the uterus, either in the ovaries, or in other parts of the body. Symptoms include severe, persistent pelvic pain and heavy bleeding. This condition may lead to infertility and a higher risk of death.

Endometriosis is considered an “estrogen-dependent disease,” and therefore may be caused by synthetic estrogens in food or in the surrounding environment. Certain pesticides, categorized as organochlorine pesticides (OCPs), have hormonal properties, and have been significantly associated with a higher risk of endometriosis and other reproductive disorders in the past.

The Washington State University study is one of the first of its kind to focus on the the connection between OCPs and endometriosis throughout the general female population. It involved 538 healthy women and 248 women diagnosed with endometriosis, all between the ages of 17 and 49.

Researchers drew blood samples from all of the women, tested their blood for 11 different organochlorine pesticides (as well as their byproducts), and then divided the women into four groups, based on the pesticide levels present in their blood.

The two pesticides that were connected to endometriosis, among the 11 tested, were mirex, which has been banned in the US since 1978, and lindane, which is banned for many uses, but is still used in manufacturing some prescription lice shampoos.

When only the women with ovarian endometriosis were compared with one another, results showed that those with the highest exposure levels to beta-HCH had a 2.5 times higher risk of endometriosis than those in the lowest exposure group.

The authors of the study summarize, “our study suggests that exposure from extensive past use of environmentally persistent OCPs in the United States, or present use in other countries, may impact the health of the current generation of reproductive-age women with regard to a hormonally-mediated disease.”

According to the Environmental Protection Agency (EPA), mirex is classified as a probable carcinogen, and besides reproductive system damage can cause harm to the digestive and nervous systems, liver, kidneys, thyroid gland and eyes, and may increase the risk of miscarriages.

The EPA classifies lindane as a possible human carcinogen, and states that chronic exposure by inhalation can cause damage to the immune, cardiovascular, nervous and reproductive systems, as well as to the liver and blood. The group also cites animal studies that have shown lindane to be a liver carcinogen.

This study by Washington State University not only shows the dangers of mirex and lindane, it also points to the potential hazards of all chemically-based pesticides and herbicides currently in use, the effects of which are largely unknown.

Both mirex and lindane were widely used in the US for years before their negative health effects came to light, and many people suffered due to exposure. Because these pesticides are so persistent in the environment and in human tissue, our generation is still suffering from their past use forty years ago.

It is frightening to imagine what health consequences will be discovered regarding the pesticides that are widely used today as replacements for mirex and lindane, and how many more generations will have to pay for our refusal to cooperate with nature to grow our food, and our stubborn choice as a society to work against it with artificial, dangerous poisons. 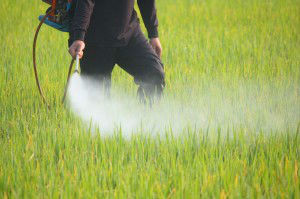 The good news is that organic farming and organically grown produce is on the rise in popularity. Organic methods are still a minority to large-scale, pesticide spraying agriculture operations. How many more people will have to suffer and become ill before those in charge decide to stop dousing our Earth with persistent chemicals?