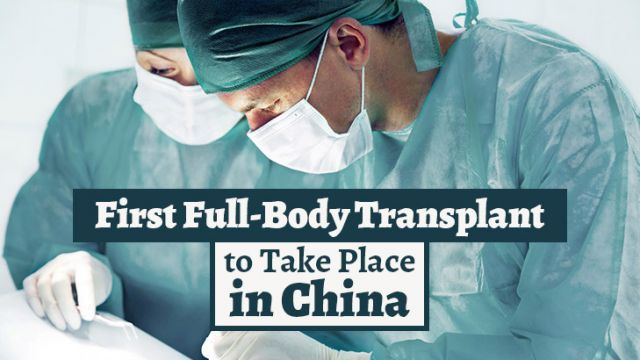 Ripped from the pages of Mary Shelley’s Frankenstein, a doctor in China reveals he is putting together a team for the world’s first full-body transplant — putting a live head on a different body. Even if the procedure works, and some experts have doubts, should such a surgery even be considered? Where do we draw the line on the ethics of transplantation?

Has “Dr. Frankenstein” crossed that line?

What seems like an impossible medical procedure, attaching a living person’s head on the healthy body of a donor, is taking shape in China. Dr. Ren Xiaoping, an orthopedic surgeon at Harbin Medical University, told the The New York Times that research was underway and that the operation would take place “when we are ready.”

Dr. Xiaoping’s plan is to remove two heads from two bodies — one living, one recently deceased — connect the blood vessels of the body of the deceased donor and the recipient head. Then, he will insert a metal plate to stabilize the new neck, bathe the spinal cord nerve endings in a glue-like substance to assist regrowth, and finally sew up the skin.

Earlier this year, Dr. Ren revealed that his team, which includes Dr. Sergio Canavero, had carried out a similar procedure, successfully transplanting a head on a monkey. However, just the blood supply between the head and the new body of the monkey was connected, not the full spinal cord.

Canavero said that if the head is cooled sufficiently the monkey could survive the procedure without suffering brain injury, reports New Scientist. But for ethical reasons, the monkey was kept alive for only 20 hours. Canavero believes head transplantation is the only treatment that will work for paralyzed patients. But who would ever volunteer for such a radical experiment?

Some wait in line

After wrestling with a friend six years ago, Wang Huanming was paralyzed from the neck down. Today, even amid the medical and ethical dilemmas that surrounds this controversial experiment, Wang and his family clings to hope that this could be the answer to their prayers. The family is aware that if the operation fails Wang will die, reports The New York Times. Still it offers them hope.

To date, there has also been 110 limb transplants completed around the world. And, according to Dr. Steven McCabe, director of the Toronto Western Hospital’s hand and upper extremity transplant program, results vary from patient to patient. On average, they can expect to gain up to 50 percent capacity of their new limb.

A potential for human trafficking

Organ transplants are an effective and necessary therapy for end-stage organ failure. And now with the technological breakthroughs of limb and even face transplants, full body transplants are that much closer to reality. But are we ready for the consequences that could result from this sort of transplantation?

Around 66,000 kidney transplants, 21,000 liver transplants and 6,000 heart transplants were performed globally in 2005, according to the World Health Organization (WHO). The shortage of organs has become a problem, leading to the development of the international organ trade. The most common way to trade organs across national borders is through potential recipients who travel abroad to undergo organ transplantation, known as “transplant tourism.”

As complex as this procedure sounds, full-body transplants could be routine, with patients custom ordering their body type of choice. Supporters claim that a full-body transplant will help people who are suffering with potentially fatal diseases that affect bodily function, such as spinal muscular atrophy and paralysis.

Critics claim that the procedure is not only technically impossible but plainly unethical. Ren has experimented with head transplants on mice, but they died shortly thereafter.

Dr. Abraham Shaked, a professor of surgery and the director of the Penn Transplant Institute at the University of Pennsylvania, told The New York Times that some aspects of the transplant process could work, such as preserving the recipient’s brain and the donor’s body before transplant, attaching many of the blood vessels and muscles and controlling adverse immune reactions.

But according to Dr. Shaked, it is not possible to connect the nerves of the spinal cord once severed. He compares using the glue-like substance, polyethylene glycol, to facilitate nerve ending growth to attaching a broken Transatlantic phone cable with Krazy Glue.

Ren is not the only doctor dabbling in this area of science and medicine. Dr. Canavero of the Turin Advanced Neuromodulation Group in Italy is a leading advocate, and scientists at the Institute of Theoretical and Experimental Biophysics at the Russian Academy of Sciences also are researching full-body transplants — though neither has plans to carry one out.

Dr. Ren suggests that the issue of ethics is secondary to helping a person’s life. But is it? There are some scary implications that inevitably surface with this sort of transplant. The question remains: Just because we can, does it mean we should?