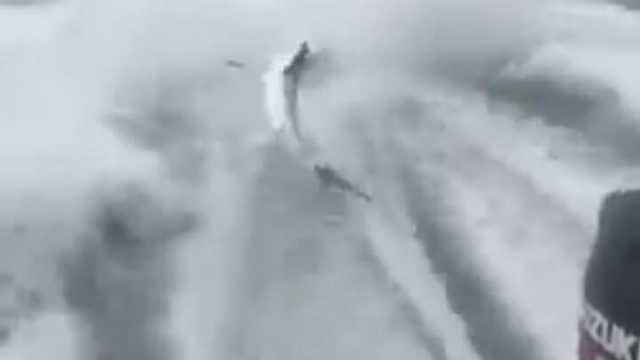 It’s disturbing, but some people get their kicks from seeing other creatures suffer. One of the latest — and pathetic — examples of this disturbing phenomena is video going viral on social media, which shows three heartless “sportsmen” getting their jollies as they illegally drag a shark by its tail while going full-throttle in their speedboat.

Apparently, the incident took place off the coast of Florida. Thankfully, the authorities at the Florida State Fish and Wildlife Conservation Commission have seen the video and have been able to identify the perpetrators of this sadistic abuse. There’s no word yet on what kind of fines or criminal penalties they may face, but hopefully, their act of wanton cruelty will not go unpunished.

Sharks are endangered and protected

Sharks, in fact, are a vital part of the marine ecosystem. Many species, however, are endangered. As a result, there are a number of global, national and state treaties that govern their treatment. For example, in 2010 Congress passed the Shark Conservation Act, which requires that all sharks be “landed: with their fins intact.” This requirement is meant to discourage the practice of de-finning sharks at sea, which essentially left the creatures to die a horrible death.

In 2012, the state of Florida came out with new regulations that presumably made it illegal to do what the bumpkins in the above video did, which involved removing the shark from the water, taking video of it and subjecting it to severe psychological stress in the process.

In addition, there are other statutes under Florida law, which make it a felony to commit any act that “results in the cruel death, or excessive or repeated infliction of unnecessary pain or suffering” of an animal.

Reckless acts involving sharks are not uncommon. For instance, a viral video of a great white shark breaking into a diver’s cage serves as additional evidence that human thrill-seeking and high IQ do not necessarily go hand-in hand.

In this incident, a marine crew uses bait to lure the great white so that it ventures near the diving cage. But the shark is so powerful that it actually breaks through the steel bars. As you can see for yourself, the diver is lucky to escape with his life.

To be fair, the footage of this great white encounter involves trained tour-boat operators who work with a marine sanctuary near Guadalupe Island off the coast of Mexico. There was no wanton cruelty involved on their part. However, the practice of luring sharks for this kind of thrill-seeking is very controversial.

The physician, poet, philosopher and author Debasish Mridha writes that “unnecessary violence against animals is a heinous crime.” Therefore, he urges humans to “Be a voice for those who do not have one.” To be blind or indifferent to the suffering of other creatures is nothing to be proud of.