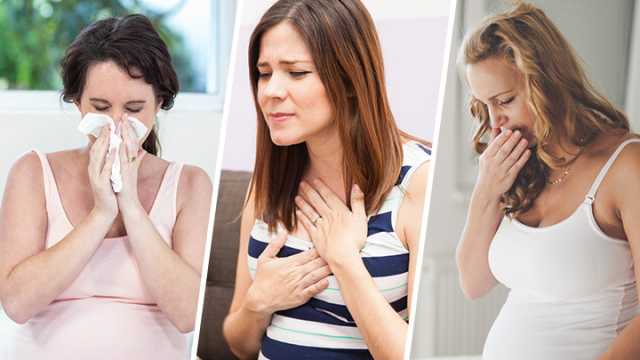 Growing up, women are often told about the many wonderful joys of pregnancy. We are told our skin will glow, and we will glide through those nine months shimmering with the magic of life growing inside us. Sure, there may be some side comments here and there about morning sickness and fatigue, but for the most part, pregnancy is painted as a beautiful time.

Well, I went through it, and I could not disagree more. I know there are some women who claim that they love being pregnant, but this is something that is so alien to me that I don’t know where to begin. The nine months I spent carrying my child were some of the worst of my life. I survived, and I now have an awesome little boy, but it was not easy, there was no magical gliding involved, and I certainly don’t think I had a “glow.”

For your reference and warning, here are nine of the worst things I experienced during my pregnancy. I don’t mean to scare anyone or say it’s not worth it (it ultimately is), but nobody warned me about many of the things I would experience, so here is my warning to those thinking about becoming parents, so that you can mentally prepare yourselves.

Let me also say that everyone’s experience of pregnancy is different — you may not experience all, half, or any of the things on this list. Yet, they happened to me, and it can happen to anyone. Warning: some gross stuff ahead.

Before I became pregnant, I was warned about morning sickness. I was not, however, warned about all day, every day sickness. I was one of the unlucky three percent of women who develop hyperemesis gravidarum during pregnancy, and it was simply awful. I could not eat anything without vomiting, no matter what time of day it was. Even when I was not eating, I was nauseous and vomiting. All the time.

I actually lost about ten pounds during my first eight or so weeks of pregnancy… the opposite of what is supposed to happen. At around eight weeks, I was finally given medication to take every two hours because I was so ill. It was never in my pregnancy plan to take medication, but it was unfortunately necessary. With the medication, I was able to eat most foods (some still made me nauseous) and gain weight normally.

At some point during my second trimester, I stood up and noticed a sharp, shooting pain from my thigh going all the way up my leg. This made it very hard to sit, stand, lay down, basically to move around at all. Sometimes the pain would subside for a while, sometimes it was on full force, but I don’t remember it fully letting up until I gave birth.

Along with all-day morning sickness, I experienced absolutely horrible heartburn. I tried eating antacid tablets for a while, all to no avail (this was a bad idea, they’re not healthy anyway). I felt like my esophagus was constantly on fire. Yep, nobody warned me about this one, either.

At some point, while I was slogging my way through my third trimester, my ankles disappeared. They weren’t just swollen, they were gone. I had calves, and unhappy swollen feet, but no ankles. This did not make walking terribly fun. I actually started to worry that my legs would stay like that forever (luckily, they did not).

This one I actually was warned about… but I still didn’t understand the extent to which it would happen. People told me, “you’ll pee when you sneeze,” but I thought if I just did Kegels and squeezed my muscles tight I’d be okay. I was wrong. Anytime I sneezed during my third trimester, I had to change my underwear. Coughing and laughing produced the same results. Ladies, if you’re pregnant, prepare to buy new underwear after your baby is born.

In the weeks before my son was born, my digestive system decided it did not feel like working anymore. I was terribly constipated. I once went a week (maybe more, I may have blocked this out) without a bowel movement, and it was excruciating. Luckily, I found out about the magic of prune juice. It works… sometimes a little too well. The horror.

I’m not a person who frequently has nightmares. I get one here and there, but not often. When I was pregnant, it was a different story. I would get the most disturbing nightmares, and wake up sweating. I am very happy that I have no memory of the actual nightmares themselves anymore… I do not want to relive those.

This was probably my individual experience more than a universal thing, but I was extremely depressed and lonely the whole time I was pregnant. I could not go out with my friends as before (being sick and swollen and in pain), and hardly anyone ever visited me. I remember feeling extremely isolated, with no one to talk to about how hard this was for me. If you have a support system of friends and family around you, embrace them. You’ll be happy they’re around.

I knew that labor would be brutal, but I did not expect for it to take 39 hours. Yup, 39 hours of contractions every two minutes. It’s not even the longest time I’ve heard of… I have a friend whose daughter took about 72 hours to arrive. Many women have a much shorter labor, but it’s good to mentally prepare yourself just in case. I wish I had.

Now for the good part: my son was born healthy and on time, and he is a wonderful little guy. So, no regrets! However, whenever anyone mentions the “magic” of pregnancy around me, I can’t help but laugh and shake my head. I know I am lucky in many ways. My son is healthy, I didn’t have any major complications, and I did not have to be hospitalized until I was in labor. It could have been much worse… but it was still terrible.

Here’s hoping all of you expectant mothers have an easier time than I did! If it’s rough, however, just remember that it will end with a baby in your arms… and then everything will be okay.