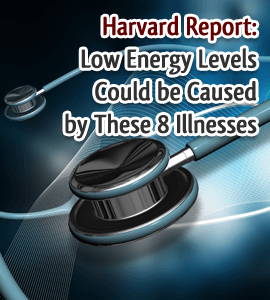 How do you know if your low energy is caused by underlying disease or is the result of lifestyle factors, stress, poor diet, lack of sleep, or normal aging?In fact, fatigue is a symptom of numerous illnesses, from minor infections such as colds to serious diseases like cancer and heart disease.

It’s a primary symptom of the illnesses described below. Some of these disorders cause fatigue directly, by sapping the body’s energy supply; others do so indirectly, as the immune system attempts to fight off the illness. Either way, once you get treatment or the infection subsides, your energy level should rebound:

Unlike acute infections such as a cold or flu, which go away in a week or two, chronic infections can last for months or years. During that time, the body expends large amounts of energy trying to overcome the infection, which can leave you feeling lethargic and weak. The immune system mounts an attack on the infection by unleashing a group of chemicals called cytokines. The cytokines are known to cause exhaustion, possibly by increasing the production of stress hormones.

Chronic infections that cause particularly severe fatigue include tuberculosis, Lyme disease, and any form of hepatitis. Each of these illnesses has effective treatments, and once treated, most people find that their energy level improves.

Anemia is a condition in which the blood has too few red blood cells and, thus, low levels of hemoglobin, the protein inside red blood cells that delivers oxygen to tissues throughout the body. Anemia can lead to fatigue because the cells of your body need oxygen both to create ATP and to liberate energy stored as ATP. Thus, a shortage of oxygen can mean a shortage of energy.

Anemia is a common condition, especially among women, and is most often caused by iron deficiency. This type of anemia affects about 9 percent to 12 percent of women under age 70. But iron-deficiency anemia typically does not cause fatigue unless it’s severe. Another form of anemia, known as pernicious anemia, results from a deficiency in vitamin B12, which causes the bone marrow to produce red blood cells that are larger and shorter-lived than normal red blood cells, reducing the number of oxygen-carrying cells.

Anemia is easily diagnosed with a blood test, and for most types, there are effective treatments. For example, anemia caused by a deficiency in iron or vitamin B12 can be cured with supplements of those nutrients. Generally, supplements are taken orally, but if your deficiency stems from your stomach’s inability to absorb vitamin B12, that vitamin can be given by injection. Whether it’s from iron deficiency or vitamin B12 deficiency, the anemia and your fatigue should lift within three to six weeks of beginning supplements.

Various diseases that damage the kidneys may indirectly cause fatigue by reducing production of erythropoietin (EPO), a hormone that stimulates the bone marrow to make and release red blood cells. The kidneys produce most EPO in your body, so if kidney function is impaired, you could develop anemia and the accompanying fatigue.

Your doctor can diagnose most kidney diseases with simple blood and urine tests. In many cases, your fatigue will be remedied once the underlying kidney problem is treated. If you have chronic kidney disease, the first step in treating anemia is usually iron supplements, which enable the EPO you produce naturally to promote production of red blood cells. If this is not sufficient to keep your hemoglobin levels normal, you may be eligible for injections of a synthetic form of EPO. Talk with your doctor about which options are best for you.

Congestive heart failure occurs when the heart is unable to pump enough blood to meet the body’s needs. Insufficient blood flow through the brain, kidneys, and muscles can cause weakness and fatigue. Compounding the problem, the failing heart works extra hard to pump blood, using up more than its share of energy.

Your doctor can detect congestive heart failure through a physical examination and diagnostic tests. The disease can be controlled by a combination of appropriate medications and lifestyle changes, such as avoiding salty foods. Depending on the person’s age and the severity of the condition, treatment can, to some degree, relieve the fatigue.

Hormones, chemicals produced by glands, are responsible for regulating a wide variety of physical functions, including those associated with digestion, reproduction, and blood circulation. Unusually high or low levels of specific hormones are responsible for several disorders that can be accompanied by fatigue, including hypothyroidism, diabetes, and Addison’s disease.

This condition occurs when the thyroid gland doesn’t produce enough thyroid hormone. If you have hypothyroidism, you may feel lethargic because your metabolism (the breakdown of food for energy) slows down. Almost 10 million people in the United States have hypothyroidism.

The condition becomes increasingly common with age, and it’s more common in women than in men. Women are five times more likely than men to experience hypothyroidism, according to the American Association of Clinical Endocrinologists.

Hypothyroidism has several causes. The most common is Hashimoto’s thyroiditis, an autoimmune disease in which the immune system attacks the cells of the thyroid, causing inflammation and cell destruction. Hypothyroidism can be diagnosed with blood tests that measure your levels of various thyroid hormones. The most commonly measured of these is thyroid-stimulating hormone (TSH).

Interestingly, particularly in people over age 60, too much thyroid hormone (a condition called hyperthyroidism) also can produce fatigue — along with jitteriness and weight loss despite a good appetite. This condition, called “apathetic hyperthyroidism,” is often overlooked by doctors. It also can be diagnosed by the TSH test.

Blood sugar (glucose) provides energy to cells, but first it must get inside the cells to be converted to a usable energy form. The pancreas makes insulin, which helps transport sugar into cells. In type 1 diabetes, the pancreas doesn’t make enough insulin. In type 2 diabetes, the pancreas initially makes more than enough insulin, but the cells are resistant to it. In either type of diabetes, not enough sugar gets into the cells, impairing their ability to generate energy. Lack of physical and mental energy is among the many symptoms of diabetes.

Diabetes can be diagnosed with a blood test that measures levels of glucose in the blood. Although there’s no cure, a variety of treatments can help control its symptoms, including medications that supply added insulin or increase the body’s insulin sensitivity, and lifestyle changes, particularly exercise and weight loss.

This rare hormonal disorder occurs when the adrenal glands don’t make enough of the hormones cortisol and aldosterone. Its most common cause is an autoimmune disease in which the immune system produces antibodies that attack and destroy the outer layer of the adrenal glands, reducing hormone production.

Symptoms develop gradually and include tiredness and weakness, as well as loss of appetite, nausea, and dizziness, among others. If severe or untreated, the disease can be fatal. The treatment is replacement hormones.

Many different types of cancer can cause loss of appetite and energy, even before the cancer causes other symptoms. Most likely, the fatigue is caused by increased levels of cytokines–chemicals made when the immune system is fighting an infection or a cancer.

While the likelihood of cancer is fortunately small in a person with a recent loss of appetite and energy, it is likely enough to warrant a visit to your doctor about it. This is particularly true if you are losing weight without trying to, or have other worrisome symptoms such as unexplained fevers, new pain someplace in your body, unusual lumps in your breast or testicles, or swelling of the lymph nodes in your neck, under your arms, or in your groin.

When to see a doctor

Even though fatigue is one of the most common medical complaints, you may feel hesitant about making a doctor’s appointment just to say you lack energy. But don’t wait until you’re so tired you can’t get out of bed before seeing a doctor. If you feel so weary or lethargic that you can’t do particular activities as well or as often as you once did, it’s important to make an appointment.

Perhaps you used to play tennis once a week without any problem, but now you get winded during the game. Or maybe, by the end of the day, you often feel too tired to cook dinner or go out to a movie. These are good reasons to see a doctor.

– President and Fellows of Harvard College