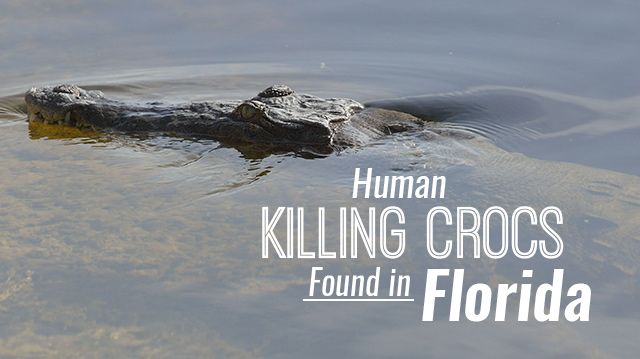 Nile crocodiles are estimated to kill hundreds of people a year in Africa, where they live naturally. Now they have now been found in Florida, a state already bulging coast-to-coast with invasive, foreign plants and critters.

The Nile crocodile is native to sub-Saharan Africa and can be found living in lakes, marshlands and rivers. Full-grown adult males range in size from 11.5 feet long to 16.5 feet long and generally weigh in between 500 and 1,200 pounds. It is the second-largest crocodile in the world; only the notoriously aggressive saltwater crocodile is larger.

Despite being less aggressive than its saltwater cousin, the Nile crocodile kills far more people. The estimated number of attacks from Nile crocodiles per year range between 275 and 745 and more than 60% of attacks are fatal. Moreover, attacks often are not reported, making it difficult to obtain complete data.

DNA testing carried out by researchers at the University of Florida confirm that four crocodilian species captured near Miami are indeed Nile crocodiles. The testing concluded that the crocs are not related to any of crocs in captivity at nearby zoos, but that the reptilian quartet’s members are related to each other. Researchers believe that the animals were brought to Florida illegally, possibly as part of an exotic pet operation.

One of the animals was caught in 2012 and released back into the wild, which allowed a team to study its growth and ability to survive in Florida’s Everglades. The crocodile was re-captured two years later and found to have grown 28% faster than a crocodile its age would under normal circumstances. This led researchers to speculate that the conditions in Florida are very accommodating to the Nile crocodile and that there is great potential for the species to be able to survive and thrive in the Everglades.

Shocking, another of the crocodiles was captured on the front porch of a Miami home.

The discovery yet another top of the food chain, “apex” predator from far away living in the wilds of Florida draws comparison to the Sunshine State’s Burmese python invasion.

Native to the tropical areas of Southeast Asia, the Burmese python averages 12 feet in length, can grow as long as 19 feet and is the second-largest snake on the planet.

In 2012, the U.S. Department of the Interior issued a ban on importing Burmese pythons, but by then the population had been established in the Everglades. Estimates of python population numbers are difficult to determine, researchers believe that at least 30,000 of the giant pythons now living in the swamps west of Miami and Fort Lauderdale.

Native mammal populations have been devastated as a result of invasive pythons. Surveys conducted near the Everglades between 1996 and 2011 saw 88% to 100% reduction in mammals such as possums, raccoons, fox and rabbits. Dietary records show that the Burmese python will eat even American alligators, which can grow as large as 15 feet.

It is believed that the pythons were brought to the area illegally and sold as pets. When these large pets later prove difficult to care for they are released into the wild, where they thrive and multiply.

Animal species ranging from small reptiles all the way to full-grown tigers can be purchased on the global black market. Florida is considered a hub for this underground industry. In the United States alone it is estimated that illegal wildlife trafficking is a $15 billion dollar business. The animals are either kept as exotic pets or often are put on display as part of roadside zoos.

The most popular animals on the black market include snakes, exotic birds, big cats (especially tigers), turtles and monkeys.

What makes Florida particularly susceptible to released animals thriving in the wild is that the climate is similar to where many of these animals originate. Researchers believe there to be at least 50 confirmed invasive species breeding in Florida, at least 40 of them lizard species and between four and five snake species.

How big a problem are the new crocs?

It is not known if there are more Nile crocodiles in the Everglades, though researchers state that considering the relatively small number of people looking for them that it is unlikely that the four captured so far are the only ones out there.

The researchers say there have been no signs that the crocs are breeding, but also that it would take just one male and one female finding each other to establish an invasive population. Romantic, perhaps. But also ecologically disastrous.

Wildlife biologist Joe Wasilewski, who co-authored the paper that released the DNA results, believes that there is cause for concern that the Nile crocodiles could become an invasive breeding species in the Everglades.

“I have two words for you: Burmese python. If you would have told me 15 years ago we would have an established population in the Everglades, I wouldn’t have believed you,” Wasilewski says.