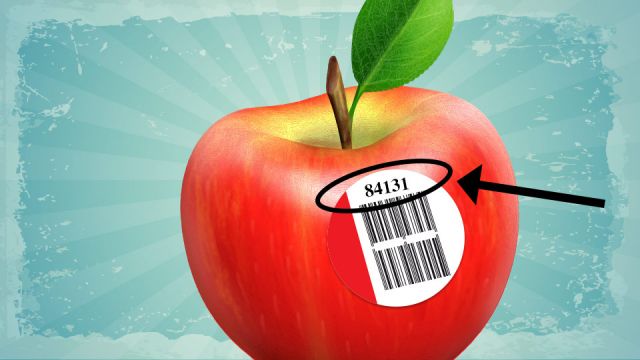 If you’re serious about your health, chances are you’ve made at least some attempt to read the labels on the foods you buy at the supermarket. Some are easy: if you see words like “hydrogenated,” “artificial,” “polyunsaturated,” or just anything you can’t pronounce, you put the offending food back on the shelf.

But some continue to have you scratching your head. A classic case is fruit. There’s a lot that goes on behind the scenes with fruit production, storage and distribution — none of which is readily apparent when you look at the label describing the fruit. Was the fruit sprayed with chemicals, irradiated, gassed, pasteurized or genetically modified? It’s hard to know, if no-one has told you what the codes actually mean.

In this post, we’ll examine PLU (price look-up) codes, and what they mean for the fruit you’re thinking about buying. In essence, is that label on the fruit saying “pick me, I’m healthy!” or “put me back, I’ve been coated in chemicals and mistreated!”

What’s in a PLU

PLU codes are most commonly found in grocery stores and supermarkets, where they’re scanned into a point of sale system or self-checkout machine in order to quickly and effectively identify the product in question. PLUs are administered by the International Federation for Produce Standards, meaning they’re a reliable form of identification in many countries across the world.

The benefit of PLUs is that, as the consumer, you have a reliable, standardized means of determining the origins and treatment of the fruit you’re thinking of buying. Unless you’re shopping at a farmer’s market, you’ll almost always see a PLU sticker on an individual or pre-packaged bundle of fruit.

How’s that, you say? Well, depending on the PLU code, you can immediately tell whether that fruit was grown organically, genetically modified or sprayed with chemicals and insecticides. If you examine the code even closer, you can determine whether it was irradiated (a process that often kills off good bacteria and enzymes along with bad ones) or pre-cut.

Here’s the quick and dirty on how to read PLU codes:

If the 5-digit PLU code label on an item of fruit starts with the number 3, it has been treated with ionizing irradiation. This is a similar process to dairy pasteurization and is often used by fruit producers and distributors to remove certain microorganisms from fruit, thereby extending shelf life.

Unfortunately, this process also partially denatures some of the aspects of the fruit itself, and can also negatively impact beneficial microorganisms and enzymes from the fruit in question. Ionizing irradiation isn’t always a bad thing, but if you’re looking out for it, look for the 3 at the start of the PLU!

If a 4 or 5 digit PLU code label on the fruit starts with the numbers 3 or 4, then that fruit was grown via conventional practices. For example, if the code is 4285, then this is a grapefruit grown with the use of pesticides, synthetic fertilizers and other harmful chemicals. By the same token, a fruit with the code 3488 can be identified as a red mango that was grown using synthetic fertilizers, insecticides, pesticides and other chemicals.

This is one PLU code that’s already fairly obvious: any label starting with a 4 is fruit that’s been precut, but then you already knew that by looking at the fruit! Remember, precut fruit may be more convenient, but it generally doesn’t keep for as long and may already be partially oxidized when you buy it.

This is where things start to get really nasty. In the past, if a PLU label on an item of fruit started with an 8, that was supposed to signify that the fruit was a genetically modified organism (GMO). Unfortunately, there was no legal requirement for retailers to display this code, and the IFPS has now decreed that foods with a PLU starting with 8 will simply be conventionally grown. This leaves a big question mark above fruit that has been genetically modified.

The USDA does have plans to implement a GMO labeling law by July 2018, but in the meantime, you’ll just have to trust your gut and buy fruit that’s less likely to be genetically modified. Higher risk GMO fruits include papaya, apples, plums and tomatoes.

At last, something positive! Fruits that have a PLU code starting with 9 have been organically grown, which means that they haven’t been treated with synthetic fertilizers, pesticides and other harmful chemicals. This also typically means that the fruit in question isn’t genetically modified, which is certainly a good thing.

In the coming months, the IFPS plans to also start using the codes 83000-84999 for organic produce, so look out for those as well.