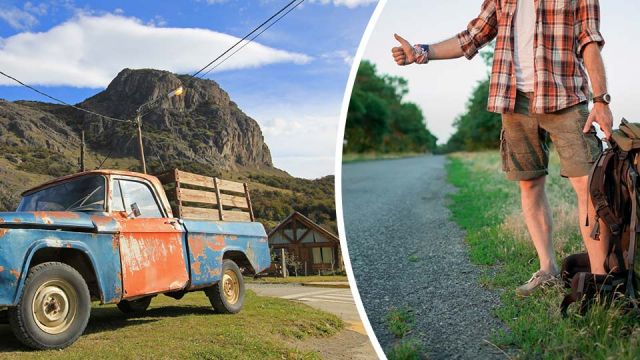 Hitchhiking is one of the best ways to see the world, despite its controversy. Often looked down upon as unsafe or unreliable, it’s inarguable hitchhiking can have its downsides. However, it can also be a life changing experience, exposing travelers to a world they didn’t even know existed. Here’s a few things I’ve learned on the road, and why I think every traveler should try hitching at least once.

Let’s get this one out of the way quickly: you’re (probably) not going to die hitchhiking. We’ve all heard the urban myths of serial killers butchering helpless hitchhikers, and killer hitchhikers murdering hapless motorists. However, the hard facts tell a different story.

FBI data indicates around 500 people have been murdered on U.S. interstate highways since 1979, while during the same period there have been roughly 175 reported cases of sexual assault. As travel blogger Nathan Swartz pointed out, that means your chances of being raped or murdered while hitching in the U.S. are somewhere around 0.0000089 percent.

Of course, it can happen, and not just in the US. Anyone who visits Australia will immediately hear about the famous Ivan Milat, who killed seven backpackers in the late 1980s and early 1990s. His murders are so notorious they inspired the 2005 horror flick “Wolf Creek” – arguably Australia’s most influential cinematic export since Crocodile Dundee. However, cases like these are famous because they’re out of the ordinary. In reality, most people have better things to do than kill people they don’t even know.

2. Everyone has a story to tell

After a few hitchhiking trips without being killed by some insane, knife-wielding version of Steve Irwin, I realized that people are generally nice. Not only are they nice, but they have some pretty good stories. I recently got to learn what it was like to fight guerrillas in Nicaragua during the 1980s. According to the story the driver told me, the Nicaraguans got so relaxed with the fighting, that they’d keep playing cards until the last minute — with each player struggling to tear themselves away from the game to fight for their lives.

3. Don’t judge a book by its cover

Just as everyone has a story, people aren’t always as they seem, and everyone also has a human side. I learned that once while riding with a rude, unpleasant man in Australia. He wasn’t quite Ivan Milat, though he was aggressive and angry, had a copy of a pretty racist newspaper on his lap, and his fashion sense suggested he’d never left rural Australia.

We immediately disliked each other, and I assumed he was some kind of stereotypical insular rural conservative who was regretting picking me up. In reality, he had spent much of his life in south-east Asia, smuggling cocaine under the nose of Myanmar’s military junta. After a life part “Pirates of the Caribbean,” part “The Godfather” meets Orwell’s “Burmese Days,” my companion had been forced to return to his homeland for health issues. He felt like he’d been robbed of his adventures too early, and was bitter.

After years of guns, drugs and the jungle, he just couldn’t deal with the mundanity of grocery shopping, doctor appointments and the endless boredom of the job that kept him afloat. On top of that, he was shocked at how racist the country had become, and had read his newspaper in horror. I left deeply respecting him.

On to a more practical life lesson, it’s always good to travel light. In my experience, it’s easier to get a ride if you don’t have a huge amount of luggage in tow. I’ve even heard a theory that small people make better hitchhikers, though I can’t confirm this.

5. Patience really is a virtue

Arguably the most important lesson of hitchhiking, patience is a skill we all need to improve. No matter how patient you are, you can always do better. Waiting can almost be meditative, though.

6. Success all comes down to luck

No matter how well prepared you are or how good your spot is, hitching all comes down to luck. Sometimes you can get a ride in minutes, sometimes it takes hours. Sometimes, you end the day exactly where you started. It’s rough, but you don’t really have much control of the situation.

Of course, we’re all living in a world we can’t really control. Even if you don’t notice it, everything has a degree of luck involved, from small daily activities up to massive life changing events. Luck can change anything. I’m not sure if that’s beautiful or terrifying.

7. Offer something in return

If there’s one thing matters more than luck, it’s good manners. I’ve never paid for anything while hitching, though I always try to offer something, like gasoline or lunch. It’s surprisingly hard to get people to take you up on these offers, though even just buying the coffees at the truck stop can show you’re not out to take your host for a ride (pun intended).

8. The poorest people are the most generous

Another odd pattern is that the most generous people tend to be those who can least afford it. Some of the kindest people around have nothing to their name but will share their last crust with someone they’ve only just met.

Finally, the most important life lesson of hitching is to trust your instincts. Indeed, while hitching, you sometimes have nothing more than your instincts to go by, which can initially be a little off-putting. There’s always that question at the back of your mind, “What if I make the wrong decision, based on a gut feeling?”

Well, the facts are your instincts are more reliable than you think they are. In fact, your instincts are right about 90 percent of the time, according to a 2012 study by researchers at the Tel Aviv University. So relax, if something doesn’t feel right, then don’t get in.