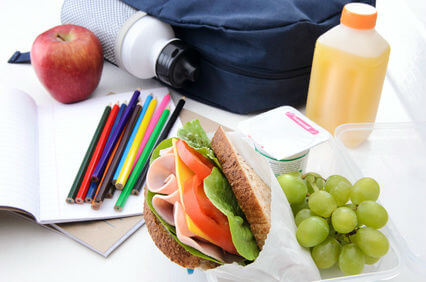 Remember the days, sitting around the lunch table trading items from your lunchbox with items from your friends lunchbox? Remember opening up your thermos on a chilly winter day to taste your Mom’s best chicken noodle soup and enjoy her awesome dark chocolate chip cookies afterwards?

Well, those days may soon be fading into the past as new rules are coming down requiring students who want to bring a lunch from home to have a note from their physician as to why they need a “special” meal.

A mother in Richmond Virginia has experienced this so-called new lunch rule firsthand when she received a note indicating that the Federal Programs Preschool no longer allows students in her district to bring lunches from home unless there is a medical condition.

I have received word from Federal Programs Preschool pertaining to lunches from home. Parents are to be informed that students can only bring lunches from home if there is a medical condition requiring a specific diet, along with a physician’s note to that regard.

I am sorry for any inconvenience. If you have any questions concerning this matter, please contact [redacted] the Health Coordinator for Federal Programs Preschool at [redacted].

This is the same school where food that is laden with pesticides, GMO’s, artificial flavorings and preservatives is sold in the lunchroom. In fact, this particular school serves lemonade and nachos or ice cream during physical education classes. What??

How the School Lunch Program Works

Thirty-two million children in America participate in the National School Lunch Program. A program that uses surplus from the agricultural industry to feed children. Almost 21 million kids receive lunches that are free or reduced price. This program, which costs over $13 billion a year, also provides breakfast.

The Agriculture Department pays almost $1 billion each year for things such as apples, sweet potatoes, turkeys and chickens. Schools get this food free. While some schools cook it on site, the majority pay processing plants to turn these free and healthy foods into things such as fried chicken nuggets, pizza and fruit pastries.

Over 1/4 of the nutrition program is privatized; outsourced to food service management groups such as Aramark, Chartwells, and Sodexo. These companies work with food manufacturers like Tyson and Pilgrims, which receive a hefty profit for the processing. In fact, over $445 million worth of commodities are sent for processing each year. This is a 50% increase since 2006.

Although the Agriculture Department does not keep track of the spending to process food, school leaders do. For example, the Michigan Department of Education gets free raw chicken worth about $11.40 a case and sends it for processing into nuggets that costs $33.45 a case. Schools in San Bernardino California spend almost $15 for French fries from $6 worth of potatoes.

Despite warnings from the Center for Science in the Public Interest about the diminished nutritional value of processed foods, schools continue to serve food that exceeds standards for fat, saturated fat and sodium.

The Robert Wood Johnson Foundation conducted studies in 2008 and found that once the healthier foods are processed they have the same nutritional value as most junk foods.

Why not just cook healthy food on site? Part of the reason that foods are sent for processing is so that school authorities do not have to oversee kitchen staff and the actual food prep and cooking.

Management companies do not have to pay skilled workers so they are saving money.Basically, they can hire workers with minimal skills to warm up processed junk to feed kids who cannot afford anything better.

In addition, management companies receive rebates from food processors (around 14%) in return for contracts. These rebates are kept secret from the schools who are charged full price. In 2010, New York State attorney general, Andrew M. Cuomo, won a $20 million settlement over Sodexo’s pocketing of rebates.

So much for the so-called “free” lunch program – someone has to pay and it is the kid’s health – as obesity and chronic illness skyrockets. There are also learning implications involved. Dr. Zullo, researcher from the University of Michigan found that outsourcing foodservice in schools was a contributor to lower test scores. He hypothesized that the junk food being served in school cafeterias may be to blame.

Author of Food Politics, Marion Nestle says, “Schools are supposed to set an example of many values of society, and one of them ought to be eating well,” Ms. Nestle said. “It’s unfortunate that the food industry is putting profits before the health of children.”

We would be remiss if we did not mention something about the legislation that has brought about new nutritional standards for school lunches. According to new nutrition standards, school districts must list calories, bring in more whole grains, lower sodium levels and offer one fruit or vegetable per meal, along with other requirements.

While this may be a partial step in the right direction, there is still a long way to go – as we have noted in this article, for example, whole grains should not be part of a healthy diet. And the new requirements are also creating their own set of problems.

In 2012, a Hoke County North Carolina mother reported that her preschool child was forced to eat the school lunch because her lunch was not deemed nutritionally fit by a government inspector. In fact, all of the students in the NC Pre-K classroom had to accept a school lunch in addition to their lunch they brought from home. Apparently, many lunches were deemed inappropriate because they did not contain a vegetable.

Ironically, the girl whose mother was interviewed, only ate the chicken nuggets on the school lunch plate and left the vegetables. The mother wrote a note to the school and asked that her daughter not be given any additional food, although the school still put milk and vegetable soup in front of the girl on another occasion.

The United States Department of Agriculture’s Smart Snacks in School nutrition plan is the first of its kind in over 30 years. The new standards are meant to tackle the ever-increasing obesity problem among youth in our country.

According to the new rules, which must be in place by July 2014, foods sold in vending machines and snack bars must contain at least 50% whole grains or have a vegetable, fruit, protein or dairy as their first ingredient – again note, the misguided emphasis on whole grains.

Other food items must contain at least 1/4 cup fruits and/or vegetables. High sugar drinks got the boot, but reduced sugar varieties, 100% fruit and vegetable juice as well as calorie-free flavored water are all permissible under the new snack rules.

While many commend the government for taking a big step in the right direction, others see it as a token to pacify concerned parents and health advocates, and claim that there is still plenty of room for unhealthy and nutrient-void snacks to sneak under the radar.

So, despite the fact that many parents are trying hard to monitor their children’s nutrition, in at least one school, and perhaps more to follow, children must have a doctor’s note to avoid school lunches.

It seems like this has gone too far, shouldn’t we be able to determine what is best for our children?