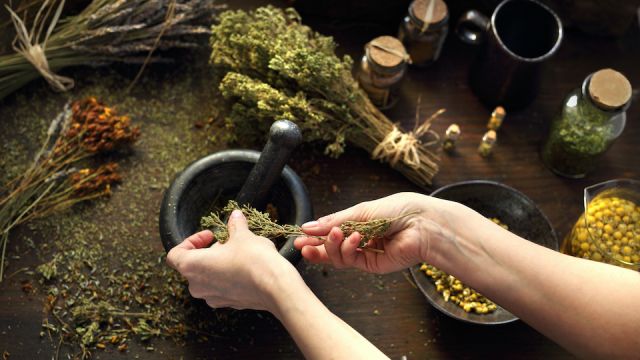 The Middle Ages was an unfortunate time to be unwell. The average life expectancy was about 30-35, and 1 in 5 children died before their first birthday.

People died from simple injuries and infections that could be easily treated today, as well as diseases we don’t hear about much anymore, like leprosy and smallpox. Treatments usually centered around herbal remedies, bleeding, purging, and supernatural ideas.

Medicines in the medieval period were sometimes homemade if they weren’t too complicated, but if they required specialized ingredients or preparation, they could be purchased from an apothecary. Although some remedies were quite sensible, others were extremely strange.

For example, one of the most popular treatments for the Black Plague was the “Vicary Method”, where a healthy chicken was plucked and applied to the affected part of the patient’s body. The poor chicken was strapped in place until it showed signs of illness, at which point it was believed to be absorbing the disease from the person. It was removed, washed, and strapped on again, and this process continued until either the chicken or the patient expired.

While many treatments seem completely backward, other medieval potions are much more promising. In one example, researchers were testing medieval medical remedies by replicating a 1000-year-old recipe for an eye salve. They were shocked to find that the recipe was incredibly effective for killing staph infections, and was actually a very remarkable antibiotic. Investigations are ongoing, with a team of researchers working to find and test hundreds of other medieval recipes that could hold promise.

Is it possible that the rediscovery of medieval drugs can have implications for present-day drug development? Here are some of the most interesting ancient potions that could still work for us today.

The recipe for the eye treatment that surprised the researchers was found in an old English book titled Bald’s Leechbook. The ingredients would have been readily available then, and can still be replicated now.

These ingredients are to be mixed together in a brass vessel and left to stand for nine nights. After straining and clarifying, the fermented mixture is put in a horn and applied to the eye with a feather.

Interestingly, researchers replicating the recipe found that each ingredient served an important purpose that contributed to an effective final product. The onion, garlic, and bull’s gall all have antibiotic properties that would have helped a stye – an infection at the root of an eyelash. The wine contains acetic acid, which, over the nine days, would react with the copper in the brass bowl to form copper salts, which are bactericidal.

Not only is this discovery fascinating, but it could also have a major impact on the next phase of modern medicine. As microbes develop resistance to antibiotics, there is an urgent need to find new remedies quickly. It is estimated that around 700,000 people a year worldwide die of infections from resistant bugs like MRSA, and that number could reach 10 million by 2050. Casting an eye back to herbal remedies like this one could hold promise in beating these dangerous bugs.

Ready to get a bit grossed out? Here is another strange ancient medical treatment that actually turned out to be extremely smart.

A 16th-century Chinese doctor reportedly fed patients “yellow soup”, a mixture containing the dried or fermented stool of a healthy person as a treatment for diarrhea or food poisoning. Scientists now understand that this remedy may have been an ancient attempt at what is now called “fecal microbiota transplantation.”

Today, fecal transplants involve the transfer of stool from healthy donors to sick people via an enema or tube. This process introduces healthy bacteria that can successfully treat people with gut infections like recurrent Clostridium difficile. Too bad it took us 400 years to rediscover this valuable (if cringe-worthy) immune therapy!

While we have modern methods like birth control pills and condoms, medieval family planning potions could still work today. Herbal treatments based on plants such as sage, rue, and pennyroyal were administered to women seeking to avoid pregnancy. With modern research, we now understand how these herbs can promote menstruation or disrupt the process of pregnancy. While it may not be smart to rely on such antiquated methods, it is interesting to note that medieval practitioners had effective herbal knowledge that has been proven correct today.

For burns and scalds, medieval practitioners recommended taking a live snail and rubbing its slime against the wound. Sounds weird, but there is a good chance that this would actually help reduce blistering and promote healing. Recent research has shown that snail slime contains antioxidants, antiseptic, anesthetic, anti-irritant, anti-inflammatory, antibiotic and antiviral properties, as well as collagen and elastin – both of which are helpful for skin repair.

One medieval migraine remedy contained herbs such as betony and vervain, boiled and wrapped in a cloth, and applied to the head. Interestingly, modern herbalists now understand that the tannins, alkaloids, and glucosides found in betony are what makes it useful for treating severe headaches and migraine. Vervain contains over 20 beneficial plant compounds, including iridoid glycosides, flavonoids, and triterpenoids, which may be responsible for its purported benefits. Vervain derivatives are also used in modern treatments for migraine, depression, and anxiety – so medieval patients may well have benefitted from this proven recipe.

While many medieval medical practices were based on misinformation and superstition, it turns out that some were founded in research, experimentation, and observation. This ancient knowledge could be making a comeback to help modern scientists today – you never know when you might get prescribed a medieval remedy!