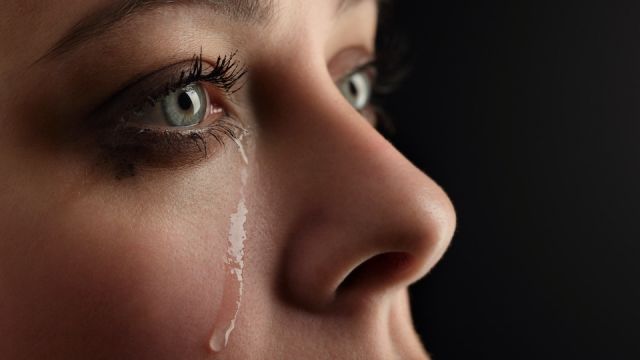 Did you know that crying is something only we humans do? And that our eyes can produce more than half a cup of tears in just a few minutes? We cry when we’re sad, but we also cry when we’re happy. Tears even flow when our eyes become irritated. Science hasn’t figured out why we cry when we are emotional. But they do know that the chemicals in emotional tears are different from normal tears. It’s even believed that crying is good for you.

So why do we cry?

When you think about crying, you normally think about emotional tears. But in reality, humans produce three types of tears.

When babies cry, their tears play an important role in seeking attention and care from adults. But when adults cry, it’s not that clear. Obviously, strong emotions trigger tears, but why do we cry? Although some species shed tears as a result of irritation or pain, only humans tear-up from emotion. But crying is more than just sadness; it’s triggered by a range of emotions, including grief, anger, surprise, happiness, and sadness.

Ella Wheeler Wilcox once wrote, “Laugh, and the world laughs with you; weep and you weep alone.” Perhaps our tears are meant to be shared. Although we often try to hide them from others, tears are a product of emotion that others can see. One theory, according to research, is that tears trigger a social bond and human connection. And since emotional tears are chemically different from, say, “onion” tears, it explains why crying can elicit such a strong emotional response in others. Also, the chemicals that make up emotional tears such as lipids, electrolytes, enzymes, and metabolites contain more protein. As a result, emotional tears are stickier, making them run down the face slower, thus allowing others to see them.

Crying also allows others to see our vulnerability, which is critical for human connection. Alternatively, some research points to crying as being a means to manipulate others. It’s no surprise since crying has a powerful effect on other people and can neutralize anger, says Jonathan Rottenberg — professor of psychology at the University of South Florida — to Time.

Who doesn’t love a good tearjerker? Crying, after all, is supposed to be cathartic —  good for the body, mind, and soul — a release of sorts. Although some researchers believe crying supports, comforts, or helps a person deal with personal issues, other researchers believe the main role of crying is to relieve emotions. Some studies claim that crying can actually improve your mood. Alternatively, other research points to feeling worse immediately after an emotional bout of tears. However, research published in Science News suggests that crying actually boosts your mood for the better.

Researchers studied the effect of crying on mood within a controlled lab setting. Two “tearjerker” type films were shown to 60 participants. Twenty-eight participants cried, and 32 did not. Participants were asked how they felt and were also asked to rate their moods 20 minutes later, and again 90 minutes after that. As expected, those who never cried remained unaffected after watching the sad films. But the mood of those who cried was noticeably low and even took a downward dip. However, within 20 minutes, their mood returned to where they were before viewing the movies. Interestingly, though, after 90 minutes, those who had cried reported they felt even more upbeat and happier than before watching the films.

On average, women cry 5.3 times per month, while men cry 1.3 times per month. And that’s anything from a sniffle to full-on sobbing. So, with all of that crying going on, there has to be more beneath the surface. According to research published in Frontiers of Psychology, crying may, in fact, be a way to self-soothe. Self-soothing is a way to calm yourself during moments of distress, and crying serves that purpose. When researchers looked at the reasons why people sometimes deliberately make themselves cry during sad or upsetting moments, they found that personal motives typically drove crying. People often deliberately cry simply for themselves, rather than for what effect it may have on the people around them. In other words, crying helps soothe the soul.

May help you sleep better

Another smaller study found that crying helps babies sleep better. What effect it has on adults remains to be seen.

Even beyond self-soothing, crying relieves pain, according to research. Emotional tears, it seems, release endorphins and oxytocin, chemicals that make people feel good, while also easing physical and emotional pain. Another chemical present in tears is lysozyme, which has powerful antimicrobial properties that could even help reduce the risks of bioterror attacks from agents like anthrax, according to a 2011 study.

Crying is a normal human response. But it’s important to remember that crying can also be a symptom of depression. So, beyond the positive benefits associated with tears, if you’re crying often, uncontrollably, and for no apparent reason, you should speak with your doctor.