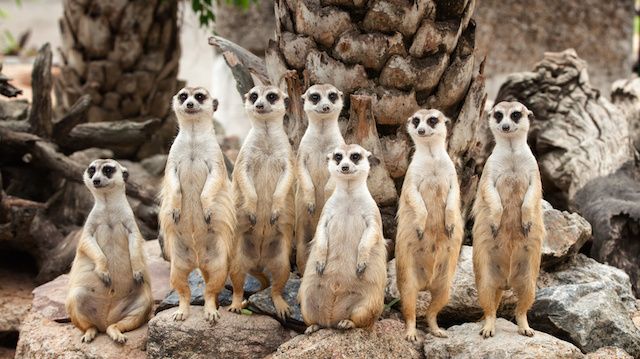 Similar to Game of Thrones, life inside a meerkat society involves fierce political powers, a strict societal hierarchy and a whole lot of full-frontal nudity. Meerkats are small and adorable members of the mongoose family, but behind their friendly non-threatening appearance, each meerkat community engages in an epic Game of Thrones-style struggle for power.

These 14- to 20-inch-long power-mad mammals can be found in parts of Namibia, Botswana, South Africa and Angola. Meerkats generally live together in what scientists refer to as a “mob” or “clan” that can be as large as 50 members, and this is where the fierce inter-competition occurs.

Meerkat communities are dominated by an alpha pair — a male and female who are the only ones allowed to breed. If another female gives birth, often the alpha pair will kill the babies and kick the mother out of the community in order to ensure the survival of their offspring. New clans are generally formed when young male meerkats not in line for an alpha-male position leave their clan and join exiled female members of other clans.
Life for each non-alpha female meerkat involves looking after the alpha pair’s kids. Females who have not produced offspring of their own will lactate in order to feed the alpha pair’s offspring and will protect them against predators, even sacrificing themselves if needed.

While this system of an alpha pair dominating subordinates seems unfair, you can’t argue that the meerkats are doing fairly well for themselves. Meerkat populations are strong; in fact, the International Union for Conservation of Nature has listed meerkats’ threatened-species status in the “Least Concern” category.

Under the alpha-pair system, meerkats have also formed a complex and efficient division of labor. While the rest of the clan is burrowing, there is always one member of the group standing guard, able to warn of possible nearby predators. The meerkats rotate who is standing guard with each shift lasting approximately an hour.

They also have very complex vocalizations, with different sounds, chirps, barks or growls that have different meanings and are understood by other members of their clan. Meerkats have three different sounds they make to warn of an aerial predator and three different sounds to warn of a land-based predator — the sounds are based on a low, medium or high sense of urgency. Upon hearing the warning sounds, meerkats will react appropriately to the specific warning, ducking their heads if it’s an aerial attack, or scurrying underground if it’s a high-urgency warning of a land-based predator. But, of course, the first priority of the clan is to ensure the survival of the alpha pair’s offspring.

Competition for the throne
Considering the enormous Iron Throne-esque nature that the alpha pair is able to wield, it should come as no surprise that competition to become a member of the ruling pair is intense. Such a position comes available only after the death of the alpha male or female, and is usually reserved for the eldest member of the pair’s offspring, unless one of their siblings has grown larger.

Size has much to do with being an alpha in these groups, and once someone has ascended to the position, they often undergo another sizeable growth spurt that is not seen in non-alpha members of the clan. Once the new alpha pair has been established, they will mark the lower-ranking members of their society with their scent, just to make sure everyone knows who’s running things.

Researchers decided to test what would happen in a community of meerkats if they jump-started the growth of some members of a clan but not others. A research team out of Cambridge University picked out pairs of same-sex littermates that could potentially aspire to an alpha-pair position. One of the pair would be fed half an egg twice a day — roughly equivalent to a full day’s worth of food for them — while the other meerkat was not fed anything by the researchers. Control groups were used by observing same-sex littermates and not feeding eggs to either member of the pair. The results showed that while the egg-fed meerkats grew larger, so did their littermates who hadn’t been fed the eggs. The conclusion then is that the meerkats, upon seeing their rivals to the throne grow larger, began increasing their own food intake in order to compete.

The research team referred to it as a “keeping up with the Joneses’” type situation.
In the control groups, neither of the littermates increased in size beyond what would be seen under normal circumstances.

This discovery regarding meerkat competitiveness for social standing runs slightly counter to previous beliefs regarding the communal nature of these animals. While alpha pairs dominate clans, other aspects of their society point to a somewhat more altruistic nature of their being. An example of the more communal aspects of meerkat society include older members of a clan teaching younger members through instruction and demonstration, for example how to eat a poisonous scorpion by first removing its tail.

The researchers are now looking into if packing on the pounds in this manner may lead to a decreased life span for the meerkats, as it does for other species. Tim Clutton-Brock, senior author of the study, says, “We don’t know yet if that’s the case, but we’re investigating whether meerkats that engage in competitive growth spurts suffer similar costs in their later years.”

Perhaps this latter point shows that in any society, no matter how adorable, being hungry for power can often lead to your downfall — a lesson that members of the Lannister family might take to heart.