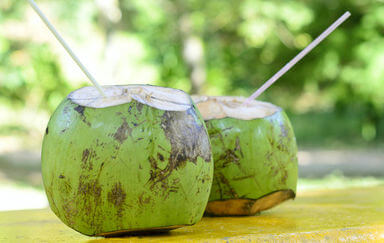 Known endearingly as the “fluid of life,” coconut water is the nutrient and mineral rich sap that is found within a coconut. The water is protected by the tough outer shell of the nut and is kept sterile and free from fungus, parasites or bacteria. Numerous tropical countries respect coconut water for its hydrating and renewing properties. In some tropical locations, coconut water is the only potable water available, and has been known to save lives.

Rich in natural vitamins, especially the B vitamins, coconut water also contains minerals and trace elements including selenium, iodine, sulfur, zinc, manganese, organic acids, enzymes, phytonutrients and amino acids. It is low in calories and sugar yet sweet. Much of the therapeutic value from coconut water comes from cytokinins which are powerful plant hormones that regulate cell growth and aging.

During WWll, the Vietnam War and the Nigerian Civil War, when intravenous solutions ran in short supply, injured soldiers were given coconut water. A person can safely be given up to one-quarter to one-third of their body weight in coconut water intravenously ( Recio, P. M. “The Intravenous Use of Coconut Water.” Phillip J Pediatric: 1974; 30 (30).) Because of it’s sterility and composition, coconut water can safely be injected directly into the bloodstream without fear of damaging blood cells or inciting an allergic reaction.

Fact: Coconut water has a similar composition to human plasma and contains all the necessary substances for growth and development of the plant embryo.

The success of coconut water on the battlefield sparked a host of research and scientific studies into this seemingly benign liquid’s therapeutic qualities. Medical journals around the world began publishing these studies from Britain, New Zealand, India, Africa, Thailand, Malaysia and even the United States.

The astounding benefits of coconut water have been intriguing scientists since the 1940’s and while some of its beneficial properties seem to be based on cultural or traditional beliefs, there is a mounting volume of scientific research to back many, if not all of these up.

Bruce Fife ND, author of Coconut Water for Health and Healing, considered a leading coconut expert says that coconut IV therapy has been used for over 60 years for emergency hydration and transfusion. While some doctors argue that coconut water is not as effective as commercial IV solutions, others prefer it when it is mixed with a little sodium chloride (salt).

Fife gives the accounts of several patients whose lives have been saved by the use of coconut water. In one instance, a commercial IV was not helping a patient recover from a stroke, but when they switched to a coconut water IV, the patient’s condition grew steadily better.

Over acidity, which is highly common today, is a dangerous condition that contributes to a host of serious health conditions. An acidic internal environment is the perfect place for disease to thrive. This is opposed to a pH balanced environment where normal body function resists disease.

In a healthy body, there are alkaline reserves, which are used in times of emergency to balance internal pH. When too many acids enter the body, the reserves become depleted, leaving the body weak and vulnerable. Health experts warn that a pH balanced diet is necessary to maintaining health.

Acidosis is extremely common in our society mostly due to the American diet and lifestyle. Although eggs, dairy and meats, are acidic, the main problem is with processed foods. These include white flour, sugar, coffee and soda, which create an acidic environment. Coconut water has an alkalizing effect on the body which can help to balance the effects of acidifying foods.

New stats from the Centers for Disease Control and Prevention reveal that 65 million Americans have HBP; about 35 million of them don’t do anything to control it; and about 16 million of those folks don’t even know they have it. In a 2005 study, 71% of participants who consumed coconut water for two weeks had a 24 point drop in systolic pressure and a 15 point drop in diastolic pressure.

A study published in the 2008 Journal of Food Chemistry and Toxicology found that coconut water was as effective in lowering cholesterol as popular cholesterol-lowering drugs in rats fed a fat-cholesterol enriched diet. Unfortunately, since coconut water is not patentable, its potent cholesterol lowering effects are unlikely to ever make it to mainstream medicine or interfere with the $30 billion dollar statin industry.

However, it is important for people to know that they have options, especially in light of the numerous side effects of popular statin drugs such as a weakened heart, reduction in co-enzyme Q10, and atrial fibrillation.

Other Benefits of Coconut Water

Fight Hangovers: Because coconut water contains a high amount of potassium, chlorides, magnesium and calcium, it is a perfect hangover remedy. Alcohol inhibits the hormone vasopressin and causes the body to eliminate a greater than usual amount of fluids. This results in dehydration, and coconut water can quickly restore the electrolytes lost from alcohol consumption.

Improve Digestion: Coconut water aids the absorption of food due to its electrolytic effect which soothes intestinal pain and spasms. It can also help to eliminate toxins, limit intestinal gas, improve nutrient absorption and generally soothe the digestive tract.

Improve Metabolism: Coconut water also helps to promote healthy thyroid function which may aid weight loss efforts. As it contains a natural form of glucose which can easily be absorbed in the bloodstream, it serves to reduce cravings for unhealthy foods, also contributing to lost pounds.

Anti-Aging: The cytokines in coconut water have an anti-aging impact on human cells and tissues. Human cells, as they age, go through progressive and irreversible changes until they finally die. Compared to young, plump, smooth and round young cells, old cells are irregular in shape, flat and full of debris.

With age, the division of cells slows down and eventually stops. Cytokines cause cells to act younger than their age so less degeneration occurs (Rattan, S.I.S. and Clark, B.F.C. Kinetin delays the onset of ageing characteristics in human fibroblasts. Biochem Biophys Res 1994;201:665-672).

One of the best benefits of coconut water is it is extremely high in potassium. As your body sweats during exercise or vigorous physical activity, your level of potassium drops. According to Nutrition-and-You, coconut water has approximately 250mg of potassium and 105mg of sodium in every 100ml of water.

According to Liz Applegate, Director of Sports Nutrition at the University of California, Davis, coconut water is great for replacing potassium if you are doing short workouts.