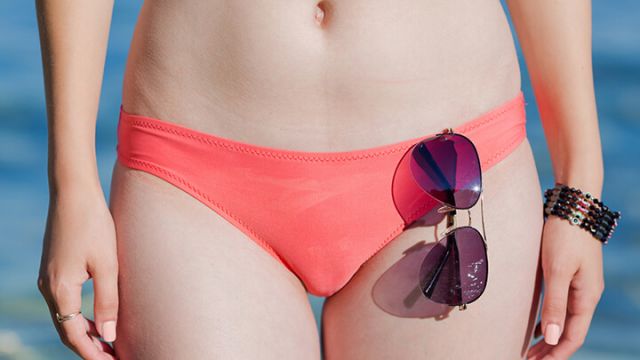 It’s official: body hair is very much out of fashion. And at the top of the list of hairy undesirables is none other than pubic hair.

Almost all of us have taken to the hair of our nether regions with the garden shears at some point in our lives, with research showing that close to 95 percent of us remove at least a fraction of our pubic hair once a month. While those statistics might favor the younger generations more than the old, it’s fair to say that when it comes to hair, you definitely don’t want much down there.

It’s a cringe-worthy subject, but that’s only the beginning. A study published last month in the Journal of JAMA Dermatology found that out of 7,570 people surveyed, a whopping 1,430 (25 percent) of them had suffered at least one grooming-related injury. If those statistics hold true for all of America, millions of people across the country are literally maiming themselves in their attempts to have their pelvic region resembling that of a prepubescent child’s.

I’m talking burns, lacerations, rashes… that kind of thing. And this is by no means confined to women. The study reported that “common areas for grooming-related injury for men were the scrotum, penis and pubis”, while women were experiencing the most common injuries on their pubis, inner thigh and vagina. Yikes! I would not want to be getting an injury in those super-sensitive parts!

But short of letting it turn into an untamed jungle down there, how do you avoid finding yourself in the emergency department with a self-induced pubic injury?

Waxing: leave this one to the professionals

According to the beauty experts, at-home waxing is the single biggest risk you’ll be exposing your overgrown nether region to.

Beautician Sam Marshall, a specialist in intimate waxing, has seen her fair share of self-administered waxings go horribly wrong. “They usually don’t know how to apply it, or which way to pull it. That’s why it’s open to so many things to go wrong, because you’re trying to do something that people have to be specially trained to do. You can tear your skin, both the labia and the scrotum can tear quite easily.”

According to Marshall, and plenty of other beauticians, DIY waxing for pubic hair removal is definitely better left to the professionals. And unless you want burns, rashes or even tears on those parts of your body where the sun don’t shine, you’d do well to heed their warnings.

When it comes to pubic hair grooming, there’s plenty of options out there: scissors, shavers, trimmers, hair removal creams and of course waxing. With DIY waxing now very much out of the question, our options are narrowed just a bit.

So what about simply grabbing the nearest pair of scissors and snipping merrily away down below, much as you’d do with your garden hedge? The problem is, unlike the garden hedge, there’s a sensitive blood-filled body part lurking just below the unwanted pubic masses, and scissors will slice right through skin and flesh when wielded with an unsure hand. I’ve tried scissors in the past, and a few close calls were enough for me to throw in the scissor towel and look elsewhere for my DIY grooming needs.

Shaving seems the logical next option: it ensures total removal of pubic hair, has your parts looking squeaky clean for whoever might glance in their direction, and is something you’re very familiar with. But you’re probably also familiar with ingrown hairs, rashes, irritation the next day as your undies rub on the newly exposed skin, and even the odd cut when you got… cocky? Shaving is a far from ideal way to remove your pubic hair.

Hair removal creams like Nair or Veet seem safer still. You simply slather on the cream, wait a few minutes, then wash it off… and the pubic hair washes off with it! It almost seems too good to be true, and in fact it is. The method by which these creams actually remove the hair is via a heady mix of chemicals that dissolve the hairs. Now surely that can’t be good for you? These chemicals can soak into your skin, cause burns and allergic reactions, leave a lingering smell, and cause skin sensitivity. I definitely don’t have any time for hair removal creams!

Which leaves us with electric trimmers. It took me a long time to invest in one of these, but when I finally did, I felt like kicking myself for not doing so sooner. Electric trimmers are easy to use, they have safety guards that prevent you from cutting yourself, they’re fast and they can trim your pubic hair super short so that it looks super tidy and tantalizing, but the skin doesn’t get irritated and there’s generally no unsightly ingrown hairs. Hooray for electric hair trimmers!