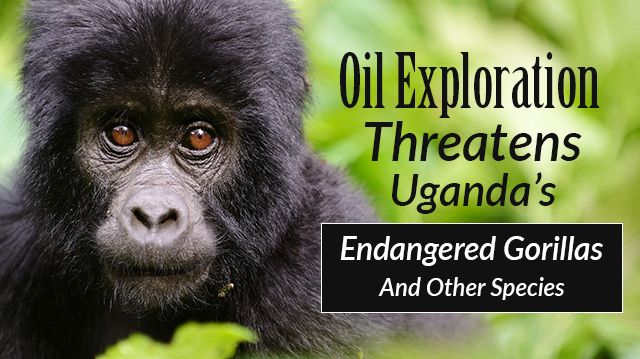 In 2006, Uganda discovered reserves of crude oil adjacent to its border with the Democratic Republic of the Congo, in the Albertine Rift basin. This year, six licensing blocks for oil exploration are expected to be assigned, covering approximately 1,160 square miles. Exploration in one particular block, Ngaji, could severely impact the Virunga National Park, according to a statement put out by environmentalists, including Greenpeace, the African Wildlife Foundation and Global Watch. It could devastate one of the world’s few remaining communities of mountain gorillas.

With rare exceptions, humans are these gorillas’ only predators. Normally, the mountain gorillas’ life span ranges from 40 to 50 years, but the animals are being wiped out by a combination of a growing human population and subsequent deforestation. Mountain gorillas are herbivores, and their size requires consumption of large amounts of plant material daily. Their native habitat provides more than 100 species of plants that make up the gorilla diet.

Mountain gorillas live in groups ranging from a couple up to 40, always with a silverback male in charge. Ten times stronger than the most powerful of humans, a male silverback will give his life to protect his group. Females do not give birth until about age 10, with an eight-and-a-half month gestation period. Baby mountain gorillas develop much faster than human infants, and are fairly independent by age three.

One of the world’s most biodiverse parklands, Virunga National Park is located in the Democratic Republic of the Congo. A UNESCO World Heritage Site consisting primarily of rainforest, the park includes parts of the Virunga Mountain Range, the home of these endangered gorillas. Africa’s oldest national park, Virunga also includes elephant herds severely threatened by poachers. According to the park’s website, poachers have reduced the Virunga herds from 3,000 to just 400 in recent decades. The park is currently home to seven “habituated families” of mountain gorillas, along with four solitary silverbacks. That’s a total of 95 mountain gorillas. Virunga National Park also operates the Senkwekwe Orphan Mountain Gorilla Center, the only such facility in the world. “Each gorilla suffered a traumatic poaching experience, injury from a snare and/or loss of the mother in a brutal killing,” according to the website.

The park recently reopened after closing for two years because of armed conflicts in the region. Oil drilling could reignite the wars that have smoldered in the region for years — devastating wildlife, ecosystems and people. Academy Award-winning actor Leonardo DiCaprio produced the documentary Virunga, focusing on the poachers, militia and “dark forces” trying to control the park’s vast natural resources. It’s rumored that SOCO, a British oil company that confirmed oil deposits in the park via seismic testing, decided against pursuing a license due to public reaction to the film.

Two major causes of global warming and accompanying climate change are deforestation and use of fossil fuels. If oil exploration is allowed, both of these principal actors will affect Virunga National Park, and set a precedent for further environmental degradation.

Keep up the pressure

With international pressure, it is possible that Uganda will reconsider issuing licenses for oil exploration. To date, no licenses have been issued and no actual exploration has commenced in the area. However, in the past, Uganda has issued drilling licenses in other game preserves and national parks, despite environmental protests.