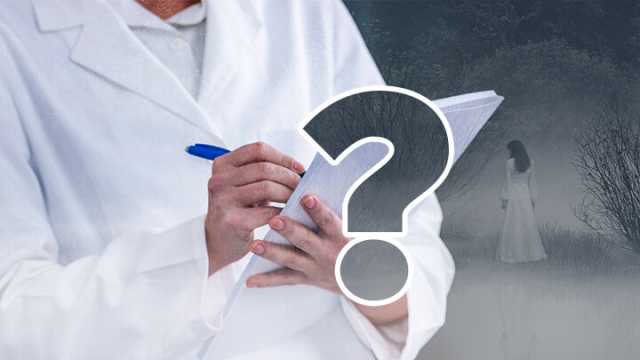 Do you believe in ghosts? Many people do — more than would probably admit it. Some people claim they don’t believe in ghosts. But faced with a supernatural phenomenon that they cannot explain, they may leave the ghost possibility open in the back of their minds. The belief in ghosts of various sorts appears in many cultures around the world, and it’s one of our most common human superstitions.

The ubiquitous nature of this belief is apparent in our entertainment. Countless movies, television shows, books and comics feature ghosts appearing in some form. Even entertainment that is not characterized as “horror” often has ghosts appearing to help out loved ones or just to say goodbye. Some ghosts are friendly, some very non-friendly. It’s clear that humans have given this concept a lot of speculation and imaginative substance over the years.

Of course, many people don’t believe in ghosts, because their existence can’t be proven. However, can it really be disproven? One theoretical physicist says yes.

On a recent episode of the BBC’s “The Infinite Monkey Cage,” Brian Cox, a theoretical physicist at the University of Manchester, explained how the existence of ghosts is not supported by the Standard Model of Physics. His explanation was twofold: one part has to do with the laws of thermodynamics. The second part has to do with the Large Hadron Collider.

According to Cox, the idea of ghosts is contradictory to the second law of thermodynamics. It’s the law which states that the overall entropy of any isolated system must increase with time. This law, Cox says, is one of the most tested and fundamental laws that we have regarding the nature of our universe. Simply, as energy is lost, the chaos factor goes up. The law states that this movement towards chaos cannot be reversed unless more energy is put into the isolated system.

Ghosts must be made of energy, since they are obviously not made of matter. If they were, we could interact with them using our senses. This is why Cox says they would not be able to exist for any length of time without dissipating, since more energy is not being put into them. If an energetic system was somehow left over after death, it would quickly be dispersed.

Ghosts are vetoed by the Large Hadron Collider

Second, Cox argues that if ghosts were real, the energetic substance that they are made from would have been detected within the Large Hadron Collider. According to Cox, while there are some big unknowns within the Standard Model of Physics, one thing that is well observed is the way that energy governs the information within our cells. He explained that if the substance that ghosts are made from was always present in a living being, the Hadron Collider would have seen it controlling cell particles.

“If we want some sort of pattern that carries information about our living cells to persist, then we must specify precisely what medium carries that pattern, and how it interacts with the matter particles out of which our bodies are made. We must, in other words, invent an extension to the Standard Model of Particle Physics that has escaped detection at the Large Hadron Collider. That’s almost inconceivable at the energy scales typical of the particle interactions in our bodies.”

So, not to rain on anyone’s ghost parade, but it seems that one cannot easily believe in both ghosts and the Standard Model of Physics at the same time. Some interesting food for thought…

Other common superstitions from around the world

While the belief in ghosts is present in some form in many different cultures, the following beliefs and superstitions are much less universal.

Perhaps Professor Cox could definitively disprove some of these?