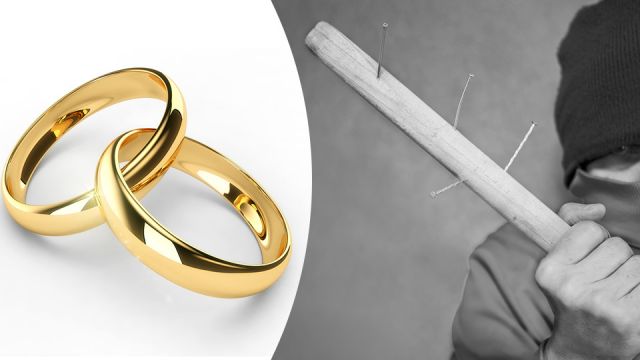 A man convicted of viciously beating his ex-wife with a nail-spiked club walks free. Why? Because the judges felt the attack was understandable that a husband would beat a wife who had betrayed him. The judge even went so far as to quote passages from the Bible, and citing cultures where adulterous women are stoned to death.

A recent court case involving a married woman, her husband and ex-lover has sparked outrage in Portugal. Three years ago, the woman began an extramarital affair with another man. But after two months, she ended it. Rejected, the woman’s former lover turned to her husband, telling him his wife had been unfaithful, according to Portuguese media outlets. The couple soon divorced. But both men, now enraged, began directing death threats toward the woman, and then worked together to plan a brutal attack on her.

In June 2015, the ex-lover kidnapped the woman and held her down while the ex-husband beat her brutally with a club spiked with nails. After being charged for the attack the ex-husband was given a 15-month suspended sentence and a fine of €1,750 euros (or $2000). The prosecutor, believing the man deserved a harsher sentence, asked an appeals court in Porto, Portugal for prison time of three years and six months. But the appeals judges decided against a harsher sentence.

And here’s where the judges’ decision becomes incomprehensible: The judges found that the woman’s extramarital affair justified leniency toward her ex-husband, because to them, it was understandable that a husband in a “depressive state” would act out against an ex-wife who had betrayed him.

Judges Neto de Moura and Maria Luísa Abrantes further justified the lighter sentence with biblical references, condemning adulterous women. “Now, adultery by a woman is a very serious attack on a man’s honor and dignity,” the judges wrote. “Societies exist where the adulterous woman is stoned to death. In the Bible, we can read that the adulterous woman should be punished with death.” They even cited a criminal law from 1886 that called for a symbolic penalty against a husband who killed his wife after finding out she committed adultery.

Needless to say, the sentence has shocked and outraged women’s rights activists, legal experts and religious authorities who believe it’s merely an attempt to justify domestic violence with references to the Bible. In a statement, Amnesty International Portugal weighed in, citing the Old Testament in a court ruling presents a “manifest violation” of the separation of church and state, which is part of Portugal’s constitution. The Women’s Union for Alternative and Response called for a protest rally in response to the ruling. On Facebook, the group stated the verdict was “perplexing,” “revolting” and violated the rights, freedoms and “dignity” of the individual.

According to Reverend Manuel Barbosa, secretary of the Portuguese Episcopal, the judges incorrectly referred to scriptures in their ruling. He further said, “No one should justify any kind of violence, in this case domestic violence, even in the case of adultery,” he told the religious news agency Ecclesia. Although adultery is not accepted in his faith, he urged the importance of preserving the dignity of women.

But it’s not the first time the “biblical-referencing” judge has used the bible when preparing sentences for domestic violence cases, reports the BBC . Last year, the judge overturned a previous sentence of two years in prison in an assault case, questioning the “reliability” of the female victim’s testimony. “A woman who commits adultery is a false, hypocritical, dishonest, disloyal, futile, immoral person,” said Judge De Moura. “In short, a person who lacks moral credibility.”

Judges and lawyers overseeing domestic violence cases will sometimes minimize criminal accountability and use victim-blaming terms suggests a report from Australia. The report highlighting the need to educate court staff about the importance of language found language such as “volatile relationship” or “stormy relationship” was often used to describe cases where a domestic violence abuser had a long history of using violence against the victim. In one example, a stalker was described as simply “making a nuisance of himself,” reports the Guardian. And the actions of a man who set his girlfriend on fire was put down to his being in a state of “jealous anger.”

On average, nearly 20 people per minute are physically abused by an intimate partner in the United States, according to the National Coalition Against Domestic Violence (NCADV). That’s over 10 million women and men per year! And these statistics only reflect the U.S. and don’t include other countries. It almost seems incomprehensible, in this day and age, that any judge or person of influence and power would blame a victim of domestic abuse.

Meanwhile, the judgment has fueled outrage over social media, with many commentators complaining that “it takes the whole issue of gender equality back to the Dark Ages.” What do you think?