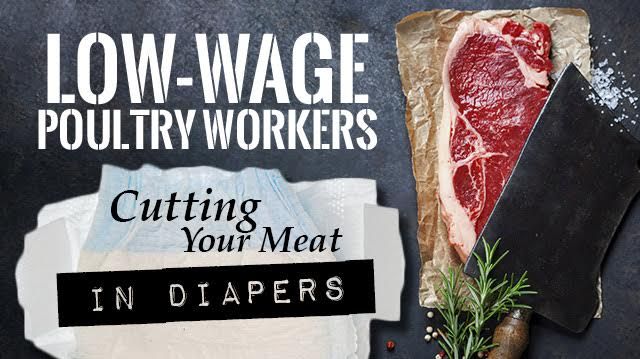 We often hear about the atrocities committed to birds in poultry plants, now we learn it’s not just the chickens that are being mistreated but also the poultry workers. A damning report exposes the poultry industries inhumane practices of denying workers their right to a bathroom break, leading some to wear diapers on the job.

America loves its chicken, and we eat more and more each year, without realizing what the poultry workers on the front line have to endure on a daily basis. Poultry workers earn low wages, suffer high rates of injury and illness, work long hours in difficult conditions and have no voice in their labor. Adding insult to injury, a recent, scathing report by anti-poverty group Oxfam America suggests that poultry workers, often treated without dignity, are made to wait up to one hour before they can leave the production line to go to the bathroom, leaving some with no other option than to wear diapers.

In addition, to lessen their urgency, workers restrict their intake of fluid risking serious health problems, say Oxfam. And it goes without saying that for menstruating and pregnant women, the wait can pose even more difficulties. However, no one, in those conditions is immune from developing urinary tract infections, which would make the wait that much more unbearable. Yet, some workers report that managers have told them to eat and drink less to avoid going to the bathroom.

What consumer don’t see is the millions of chickens trucked to factories, hung and slaughtered, processed into pieces and packaged. A large portion of this work happens on the processing line. The line needs to run smoothly to keep production high — 24/7. Workers are positioned in the same spot each day processing thousands of chickens. The faster the line runs, the higher the yield and the higher the profits.

Workers stay in place on the line to keep production flowing. However, if a worker slows down or tries to stop the line, the company often disciplines or lets the worker go and finds another one who is less likely to complain, suggests Oxfam.

The report is damning, and paints an ugly picture of the poultry industry. Even so, Oxfam’s mission was to “pull back the curtain” on the poultry industry’s labor practices, and show the public what actually goes on inside the plants that Oxfam says, have become ever larger, more industrialized, and more secretive.

On the line, exploited workers suffer high rates of illnesses and injuries, earn low pay, and enjoy little or no job security.

“All Unionized workers have the right to Union representation, they do not have to silently endure these types of indignities or fear being reprimanded,” say Bill Marko and Emilio Di Francesco, Chief Stewards for UNIFOR, Local 26, to the Alternative Daily. “While the conditions outlined in the report are degrading to say the least,” says Marko, “most Unions are not legally allowed to go out and actively seek grievances from workers, they can however, outline employee rights.”

The United Food and Commercial Workers Union (UFCW), represents thousands of workers in the poultry industry. In response to the report and subsequent news coverage, the UFCW released the following statement:

“The indignity with which poultry workers are being treated in America has to stop. Workers need to know they have a right to organize and that organized workers have more opportunities to protect themselves from this type of abuse,” said the UFCW. “The headline is salacious, but the heart of the matter is that unionized workers can speak freely about dangerous working conditions without fear of retaliation. This leads to a healthier and more productive work environment and a safer product for consumers.”

Like many large corporations, people who work the front lines are often treated like disposable commodities — but there are exceptions.

Through hundreds of interviews, only a handful of work­ers reported that their bathroom needs are respected, suggests the Oxfam report. These exceptions are for the most part in plants that have unions in place, which offer important protections, inform workers of their rights, and en­sure they have a voice on the job.

It’s important to note that Unionized workers report that they feel comfortable leaving or stopping the line when their requests are denied for too long. However, only one-third of the poultry workforce is unionized, says Oxfam, leaving most workers without essential protection.

Email statements to Bloomberg, by Poultry Industry representative, deny accusations of abuse and mistreatment, presented in the Oxfam report.

Tyson said in a statement that it does “not tolerate the refusal of requests to use the restroom,” according to Bloomberg.

Perdue responded that the “anecdotes reported are not consistent” with the company’s policies and practices.

Pilgrim’s Pride said, “Any allegations of the nature claimed by Oxfam, if proven, would be clear violations of company policy and would result in disciplinary action.”

The National Chicken Council and the U.S. Poultry & Egg Association responded by saying they are troubled by the claims in the Oxfam report. However, they also question Oxfam’s effort “to paint the whole industry with a broad brush based on a handful of anonymous claims.”

“Although individual practices vary by company, restroom breaks are planned for any production line. Most facilities also employ extra people to cover for production workers who request a bathroom break,” they said in a statement. “Coordinating restroom breaks in the workplace is certainly not unique to the chicken industry.”

But Oxfam says differently, and when it comes to bathroom breaks they ask the poultry industry to follow the National Institute for Occupational Safety and Health’s recommendation for restroom breaks for workers. They also ask that staffing levels are high enough so floaters can stand in for workers who need a bathroom break.

I don’t think that’s asking for much — do you?