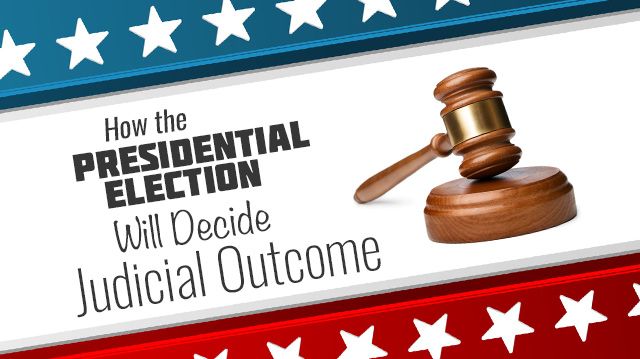 Until it doesn’t. The unexpected death of Antonin Scalia in February 2016, and the subsequent move by Senate Republicans to rule out even a hearing for any of President Obama’s nominees, has left the nation’s high court in limbo.

Heading into the election season, the Court appears deadlocked, evenly split on most issues between four conservative and four liberals. The next president thus has the opportunity to tip the ideological balance of the highest legal authority in the land. The stakes could not be higher.

Undoubtedly, the two frontrunners — Democrat Hillary Clinton and Republican Donald Trump — have vastly different agendas, ideas that they will attempt to promote through their judicial appointments, including to the Supreme Court to replace Scalia and any other justice who leaves office during the coming four to eight years.

High profile cases in the docket involving immigration, abortion and affirmative action already are piling up. How might Clinton or Trump impact the Court’s rulings on these important matters?

Here are several of the most significant issues the Court is expected to address with a look at how a Clinton or Trump presidency could shift the balance on these issues.

On April 18 2016, the Court heard arguments in the case of United States v. Texas. At issue is the constitutionality of President Obama’s executive action protecting thousands of undocumented workers from deportation by allowing them to stay in the country and work. Presently, the high court is divided 4-4 along ideological lines. A split decision lets stand a lower court ruling, effectively undoing Obama’s order. A definitive ruling may not come until a tie-breaking justice is seated.

According to political experts, Trump is wagering that he can win the election by picking up enough votes from disaffected white voters to offset Hispanics, immigrants and other minorities he’s offended during his campaign. Presumably, to placate his supporters he would choose a justice inclined toward tighter immigration policies.

Conversely, Clinton would like to extend her party’s success with the Latino community and newly arriving minorities.Therefore, expect her to choose a justice who would support progressive immigration reform.

When it comes to immigration, Clinton and Trump represent diametrically opposing views. The billionaire businessman openly espouses a “fortress America” attitude, while the former First Lady believes we are a nation of immigrants and should recognize that fact. Their next choice for the Supreme Court could well decide which vision of America prevails.

On March 2, 2016, the Supreme Court heard arguments in the case of Whole Woman’s Health v. Hellerstedt. At issue is a Texas law which would severely restrict the number of abortion clinics allowed to operate in the state.

It’s been almost a decade since the Court has heard a major abortion case. This one has the potential to alter the status quo.

Many legal observers believe that the late Justice Scalia was determined to overturn the landmark abortion-rights case Roe v. Wade, which the “originalist” justice believed was wrongly decided because it “invented” a new right that never explicitly appears in the text of the Constitution.

Trump openly praised Scalia, insisting that he’s the model for the type of justice he would nominate. Trump has also made a number of comments about women that many observers have interpreted as misogynistic. It would be no surprise if he appeased the conservative base by nominating a justice who would be a swing vote to roll back Roe v. Wade.

On the other hand, Hillary Clinton has long been a staunch advocate for reproductive choice. Whether Roe vs. Wade is preserved or undone will hinge on who is elected in November.

On December 9, 2015, the Supreme Court heard arguments in Fisher v. The University of Texas. The case involves the question of whether affirmative action policies at the university are in conflict with the Constitution’s equal protection clause.

The suit was brought by Abigail Fisher, a former college student who claims that race-conscious admission policies unjustly denied her entry to the University of Texas. The institution’s administrators, however, insist that it is appropriate to consider race as one factor to achieve greater educational diversity.

Sandra Day O’Connor, a retired justice, once said that “25 years from now the use of racial preferences will no longer be necessary.” This attitude reflects a general conservative unease with quotas involving race or ethnicity. In particular, Chief Justice Roberts has voiced doubts about affirmative action, and Justice Kennedy has never seemed sympathetic to the idea.

Meanwhile, Justice Elena Kagan has recused herself from the case because she worked on it as a solicitor general. As a result, the issue may be decided by just 7 justices.

Conservatives have been looking to end race-based admissions for some time. Progressives believe they are necessary to promote a more diverse and inclusive culture.

If elected, Trump will most likely nominate justices deeply skeptical of affirmative action. In contrast, Clinton is likely to nominate a justice who believes race-neutral admission policies would be insufficient to achieve diversity and a more just society.

The Court is evenly split. Senate Republicans have succeeded in thwarting President Obama from tilting the Supreme Court in a more progressive direction. The next president will have the opportunity to fill a vacancy with momentous implications.

Trump and Clinton thus represent a stark contrast when it comes to the directions they envision for the country. Undoubtedly, the individual(s) they choose to sit on the Supreme Court will play a decisive role in how this nation handles immigration policy, abortion and affirmative action.