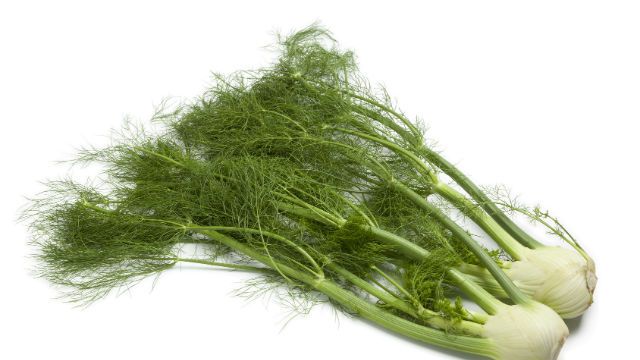 Fennel (Foeniculum vulgare) is a sweet, crisp and refreshing member of the Umbelliferae family, which also includes anise, carrots, dill and cumin.

It was enjoyed for its culinary and medicinal qualities by the ancient Egyptians, Greeks and Romans, as wild fennel flourished in Eastern Asia and the Mediterranean before spreading to Europe.

This aromatic plant received its nickname, “marathon,” from the ancient Greek Battle of Marathon, as it was thought to have grown on the field where the battle was fought.

In the Middle Ages, fennel was used in concoctions for warding off witchcraft, and was also hung over doorways to banish evil spirits. It was also often used in traditional remedies as a carminative, to relieve gas and other digestive distress.

Today, fennel is cultivated all over the world, and is especially prevalent in Italian cooking. Every part of the plant, from the seed to the stalk to the yellow flower, is edible.

The plant is made up of a pale green or white bulb with stalks arising from it, topped with leaves and the seed-producing flowers, depending on the season. It has an aromatic quality, with a taste that is akin to anise seed and licorice. Fennel seeds are often used for seasoning foods, and the crunchy bulb is often chopped up in salads.

Fennel is rich in antioxidants, including the flavonoids quercetin and rutin. These help to reduce inflammation in the body and protect the cells from oxidative stress damage, thereby lowering the risk of chronic disease.

This veggie also contains a volatile oil called anethole, which has been linked to antibacterial and antifungal actions. Anethole is anti-inflammatory in nature, and has been linked to the possible prevention of cancer and certain types of liver damage.

The bulbs of fennel are a good source of fiber which, along with keeping the digestive system running smoothly and helping to flush toxins from the colon, also helps to regulate blood sugar and may reduce LDL ‘bad’ cholesterol.

The high fiber content is one reason why fennel has been employed as a weight loss aid. Fennel tea, often brewed from the seeds, can relieve digestive discomfort and gas. Traditionally, the seeds have also been eaten to keep hunger at bay.

Fennel is high in potassium, which helps to keep blood pressure levels stable. It also functions to regulate the heartbeat, is important for proper muscle function, maintains normal fluid balance in the body, and regulates sodium levels in the blood.

In this way, potassium may help to reduce your risk of heart attack and stroke. The folate found in fennel is a mineral that works to reduce heart disease risk by preventing homocysteine damage to blood vessel walls, and is also important to the prevention of birth defects in unborn babies.

Other traditional uses of fennel include encouraging menstruation and easing chronic coughs. In ancient times, it was also sometimes employed as an aphrodisiac.