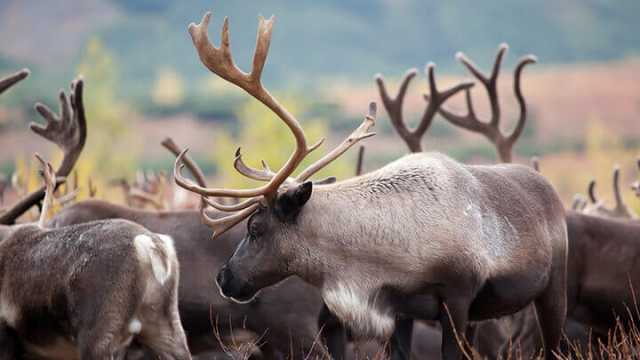 With the holiday season upon us, it’s easy to think of reindeer as magical creatures that appear in awesome claymation movies and help guide Santa’s sleigh. However, the real story is not as much of a fairy tale. The sad truth is that reindeer are amongst the species most impacted by our changing climate.

Reindeer and caribou are the exact same species. Caribou is just the name given to reindeer in parts of North America. In Northern Europe and Siberia, they’ve always been known as reindeer. They are a species of deer particularly adept at surviving in cold regions, which is perhaps why they got associated with Santa in the north pole.

A recent study concluded that the impacts of climate change are causing reindeer to become slower. They are less able to adapt to extreme weather and unable to join in all their reindeer games (such as foraging for food). Reindeer populations have declined by 60 percent in the last 30 years. And as warmer winters continue, their numbers continue to dwindle.

In the winter, reindeer will forage for food under the snow. Their main food source is lichen, which looks a lot like leafy greens or plants. However, they are actually a hybrid fungi algae organism.

Climate change is making it harder for reindeer to find this source of food. Record-breaking warmer winters mean the planet has less snow and more rain. When that rain turns to ice, it covers up the lichen, cutting reindeer off from their main food source. Reindeer can forage through snow for lichen, but not through ice thicker than a couple of centimeters.

With less food available, more and more reindeer are succumbing to starvation in the winter. The average size of individual reindeer has been decreasing as well.

This weather trend, what experts refer to as “autumn/winter rain-on-snow events,” led to massive reindeer famines in the same region in 2006 and 2013.

“Reindeer are used to sporadic ice cover, and adult males can normally smash through ice around 2 centimeters thick,” stated Bruce Forbes, lead researcher on the study. “But in 2006 and 2013, the ice was several tens of centimeters thick.”

In addition to famines being catastrophic for the reindeer themselves, local human populations often rely on reindeer herding as a way to support their livelihood. Such drastic decline in reindeer population carries an economic impact to local herders as well.

“If we see such events again this year, it could mean that they’re becoming more frequent,” Forbes continued. “Now is the risk window. And if it happens again, it will be a major problem for traditional reindeer herders still suffering from losses in 2013.”

In most places, reindeer are also an important source of prey for wolves and other arctic predators. A decline in reindeer population also means a decline in food sources for other species.

In Canada, reindeer (also known as caribou) are an important source of food and skins for clothing. Their worth is estimated at $100 million annually to northern communities. However, the numbers of reindeer in the Canadian arctic has decreased drastically.

World Wildlife Fund Canada estimates that fewer than half of Canada’s barren-ground caribou remain. Some herds, which have historical numbers as high as 472,000, have decreased more than 95 percent. Experts estimate there are just 19,769 individuals remaining.

The decline in population in Canada can also be attributed in part to increased rain-on-snow events, but other factors play a role as well. Increased mining and industrial development in the arctic have disturbed migratory and breeding patterns.

One of Canada’s greatest wildlife concerns

“The decline of barren-ground caribou is one of the greatest wildlife conservation concerns in Canada. With some populations down to less than five percent of historical highs, we risk entire herds disappearing from our Arctic landscape,” he said. “Not only is the loss of caribou detrimental to the health of Arctic ecosystems, it is a significant loss to our national heritage and to Indigenous communities, for which caribou play an important role in traditions and livelihoods.”

How you can help reindeer

First, you can help support reindeer populations (and other forms of wildlife) by reducing your carbon footprint. You can also look for paper products that have been certified by the Forest Stewardship Council, so you’ll know they didn’t interfere with critical wildlife habitat.

The David Suzuki Foundation is also selling caribou themed e-cards that you can “send to someone you caribou!” Your donation will go to the Foundation’s work protecting the reindeer in Canada’s boreal forest.

Remember: Any action you take to reduce climate change is an action to help reindeer — and countless other species, including us. Do whatever you can to help!